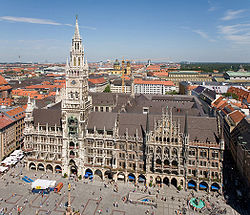 The New Town Hall is a town hall at the northern part of Marienplatz
Marienplatz
Marienplatz is a central square in the city center of Munich, Germany. It has been the city's main square since 1158.-Architecture:...
in Munich
Munich
Munich The city's motto is "" . Before 2006, it was "Weltstadt mit Herz" . Its native name, , is derived from the Old High German Munichen, meaning "by the monks' place". The city's name derives from the monks of the Benedictine order who founded the city; hence the monk depicted on the city's coat...
, Bavaria, Germany. It hosts the city government including the city council
City council
A city council or town council is the legislative body that governs a city, town, municipality or local government area.-Australia & NZ:Because of the differences in legislation between the States, the exact definition of a City Council varies...
, offices of the mayor
Mayor
In many countries, a Mayor is the highest ranking officer in the municipal government of a town or a large urban city....
s and part of the administration. In 1874 the municipality had left the Old Town Hall
Old Town Hall, Munich
The Old Town Hall , until 1874 the domicile of the municipality, serves today as a building for the city council in Munich. The Old Town Hall bounds the central square Marienplatz on its east side.-Architecture:...
for its new domicile.

The main facade is placed toward the plaza, while the back side is adjacent to a small park (Marienhof). The basement is almost completely occupied by a large restaurant called Ratskeller. On the ground floor, some rooms are rented for small businesses. Also located in the ground floor is the major official tourist information.

The first floor hosts a big balcony towards the Marienplatz which is used for large festivals such as football championships or for concerts during the Weihnachtsmarkt
Christmas Market
A Christmas market, also known as Christkindlmarkt, Christkindlesmarkt, Christkindlmarket, and Weihnachtsmarkt, is a street market associated with the celebration of Christmas during the four weeks of Advent...
. Its main tower has a height of 85 m and is available for visitors with an elevator. On the top thrones the Münchner Kindl. The Rathaus-Glockenspiel
Rathaus-Glockenspiel
The Rathaus-Glockenspiel of Munich is a tourist attraction in Marienplatz the heart of Munich.Part of the second construction phase of the New Town Hall, it dates from 1908. Every day at 11 a.m. it chimes and re-enacts two stories from the 16th century to the amusement of mass crowds of tourists...
, performed by an apparatus daily on 11am, 12pm and 5pm, is a tourist attraction
Tourist attraction
A tourist attraction is a place of interest where tourists visit, typically for its inherent or exhibited cultural value, historical significance, natural or built beauty, or amusement opportunities....
.