Encyclopedia
Okinawa Island is the largest of the Okinawa Islands
Okinawa Islands
Okinawa Islands are a group of islands that belongs to Okinawa Prefecture. Okinawa Prefecture makes up a portion of the Ryukyu Islands. The prefectural capital Naha, as well as most of the population, exists on the largest island, Okinawa Island...
and the Ryukyu Islands
Ryukyu Islands
The , also known as the , is a chain of islands in the western Pacific, on the eastern limit of the East China Sea and to the southwest of the island of Kyushu in Japan. From about 1829 until the mid 20th century, they were alternately called Luchu, Loochoo, or Lewchew, akin to the Mandarin...
of Japan
Japan
Japan is an island nation in East Asia. Located in the Pacific Ocean, it lies to the east of the Sea of Japan, China, North Korea, South Korea and Russia, stretching from the Sea of Okhotsk in the north to the East China Sea and Taiwan in the south...
, and is home to Naha, the capital of Okinawa Prefecture
Okinawa Prefecture
is one of Japan's southern prefectures. It consists of hundreds of the Ryukyu Islands in a chain over long, which extends southwest from Kyūshū to Taiwan. Okinawa's capital, Naha, is located in the southern part of Okinawa Island...
. The island has an area of 1201.03 square kilometres (463.7 sq mi). It is roughly 400 miles (643.7 km) south of the rest of Japan.

The island of Okinawa was the site of most of the ground warfare in the Battle of Okinawa
Battle of Okinawa
The Battle of Okinawa, codenamed Operation Iceberg, was fought on the Ryukyu Islands of Okinawa and was the largest amphibious assault in the Pacific War of World War II. The 82-day-long battle lasted from early April until mid-June 1945...
during World War II
World War II
World War II, or the Second World War , was a global conflict lasting from 1939 to 1945, involving most of the world's nations—including all of the great powers—eventually forming two opposing military alliances: the Allies and the Axis...
, when American Army and Marine Corps troops fought a long and bloody battle to capture Okinawa, so it could next be used as the major air force and troop base for the planned invasion of Japan. During this 82-day-long battle, about 100,000 Imperial Japanese Army
Imperial Japanese Army
-Foundation:During the Meiji Restoration, the military forces loyal to the Emperor were samurai drawn primarily from the loyalist feudal domains of Satsuma and Chōshū...
troops and 12,510 Americans were killed, and in addition to these deaths, somewhere between 42,000 and 150,000 Okinawan civilians - approximately one quarter of the civilian population - were also killed.

During the American military occupation of Japan
Occupied Japan
At the end of World War II, Japan was occupied by the Allied Powers, led by the United States with contributions also from Australia, India, New Zealand and the United Kingdom. This foreign presence marked the first time in its history that the island nation had been occupied by a foreign power...
(1945–52), which followed the Imperial Japanese surrender on September 2, 1945, in Tokyo Bay
Tokyo Bay
is a bay in the southern Kantō region of Japan. Its old name was .-Geography:Tokyo Bay is surrounded by the Bōsō Peninsula to the east and the Miura Peninsula to the west. In a narrow sense, Tokyo Bay is the area north of the straight line formed by the on the Miura Peninsula on one end and on...
, the United States
United States
The United States of America is a federal constitutional republic comprising fifty states and a federal district...
controlled Okinawa Island and the nearby Ryukyu islands and islets. These all remained in American military possession until June 17, 1972, with numerous U.S. Army, U.S. Marine Corps, and U.S. Air Force bases there.

In February 2010 an earthquake, measuring 7.0 on the Richter Scale, hit the island.

As of September, 2009, the Japanese government estimates the population at 1,384,762. This total comprises Ryūkyūans
Ryukyuans
The are the indigenous peoples of the Ryukyu Islands between the islands of Kyūshū and Taiwan. The generally recognized subgroups of Ryukyuans are Amamians, Okinawans, Miyakoans, Yaeyamans, and Yonagunians. Geographically, they live in either Okinawa Prefecture or Kagoshima Prefecture...
(especially native Okinawans), Japanese people
Japanese people
The are an ethnic group originating in the Japanese archipelago and are the predominant ethnic group of Japan. Worldwide, approximately 130 million people are of Japanese descent; of these, approximately 127 million are residents of Japan. People of Japanese ancestry who live in other countries...
, and expatriate
Expatriate
An expatriate is a person temporarily or permanently residing in a country and culture other than that of the person's upbringing...
s, as well as American military personnel and their families. The Okinawan language
Okinawan language
Central Okinawan, or simply Okinawan , is a Northern Ryukyuan language spoken primarily in the southern half of the island of Okinawa, as well as in the surrounding islands of Kerama, Kumejima, Tonaki, Aguni, and a number of smaller peripheral islands...
is called Uchinaguchi or "Hogan", although most residents speak Japanese
Okinawan Japanese
is the Japanese language as spoken by people of Okinawa Prefecture. Okinawan Japanese's accents and words are influenced by traditional Ryukyuan languages. Okinawan Japanese has some loanwords from American English due to the United States administration after the Battle of Okinawa.- Vocabulary and...
.

Whereas northern Okinawa Island is largely unpopulated, the south is markedly urbanized
Urbanization
Urbanization, urbanisation or urban drift is the physical growth of urban areas as a result of global change. The United Nations projected that half of the world's population would live in urban areas at the end of 2008....
—particularly the city of Naha
Naha, Okinawa
is the capital city of the Japanese prefecture of Okinawa.Naha is a coastal city located on the East China Sea coast of the southern part of Okinawa Island, the largest of the Ryukyu Islands...
, and the urban corridor stretching north from there to the city of Okinawa
Okinawa, Okinawa
is the second-largest city in Okinawa Prefecture, Japan, following Naha, the capital city. It is located in the central part of the island of Okinawa, about 20 km north of Naha....
.

There are six gusuku
Gusuku
, or just , is the term used for the distinctive Okinawan form of castles or fortresses. In standard Japanese, the same kanji is pronounced "shiro", but the word is probably cognate with a different Japanese word, "soko" , which means "fortress"...
, Okinawan fortresses, most of which now lie in ruins.

The island has an area of 1201.03 square kilometres (463.7 sq mi). It is smaller than Oahu
Oahu
Oahu or Oahu , known as "The Gathering Place", is the third largest of the Hawaiian Islands and most populous of the islands in the U.S. state of Hawaii. The state capital Honolulu is located on the southeast coast...
. It is roughly 400 miles (643.7 km) south of the rest of Japan.

The southern end of the island consists of uplifted coral reef
Coral reef
Coral reefs are underwater structures made from calcium carbonate secreted by corals. Coral reefs are colonies of tiny living animals found in marine waters that contain few nutrients. Most coral reefs are built from stony corals, which in turn consist of polyps that cluster in groups. The polyps...
, whereas the northern half has proportionally more igneous rock. The easily eroded limestone
Limestone
Limestone is a sedimentary rock composed largely of the minerals calcite and aragonite, which are different crystal forms of calcium carbonate . Many limestones are composed from skeletal fragments of marine organisms such as coral or foraminifera....
of the south has many caves, the most famous of which is Gyokusendō in Nanjō
Nanjo, Okinawa
is a city in the southern part of Okinawa Island in Okinawa Prefecture, Japan.It was formed on January 1, 2006, from the merger of the town of Sashiki, and the villages of Chinen, Ōzato and Tamagusuku, all from Shimajiri District....
. An 850 m stretch is open to tourists.

Okinawa is also home to the Yanbaru Quina, a small flightless bird that is near extinction. Habu snakes were brought to Okinawa to stop the mongoose from attacking the birds. It did not succeed in eliminating the Habu, but instead preyed on birds. 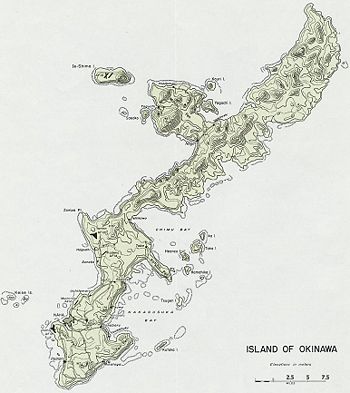 There are many local izakaya and cafes that cater to specific Okinawan cuisines such as goya champaru (bitter melon), fu champaru (wheat gluten), and ton katsu (tenderized, breaded, fried pork cutlet. Okinawan soba is the signature dish as opposed to the mainland version (buckwheat noodles served cold with soy sauce). Okinawan soba are what noodles served hot in a soup usually with pork (rib or pork belly.) American presence on the island has also created some creative dishes such a taco rice, which is now a common meal served in bentos.

The north has more of a agricultural, traditional type lifestyle. The North has a number of tourist attractions in Nago
Nago, Okinawa
is a city located in the northern part of Okinawa Island, Okinawa Prefecture, Japan. As of 2008, the city has an estimated population of 60,598 and the density of 288 persons per km². The total area is 210.30 km². The city was founded on August 1, 1970, and hosted the G-8 Summit in 2000.-...
. There are two festivals annually. Other tourist attractions include a beach, a park and a beer factory. and Hiji Falls
Hiji Falls
is a National Park and popular tourist destination on the island of Okinawa, Japan. It is located in the northern part of the island, approximately 20 kilometers north of the city of Nago. The area the falls and the ensuing river flow through is tropical most of the year...
. There are scenic routes in the north.

Okinawa was also the setting for the 1986 film The Karate Kid, Part II
The Karate Kid, Part II
The Karate Kid, Part II is a 1986 American martial arts film and is a sequel to 1984's The Karate Kid. Ralph Macchio and Pat Morita reprise their roles as Daniel LaRusso and Mr. Miyagi, respectively. The original music score was composed by Bill Conti...
where Mr Miyagi (Pat Morita
Pat Morita
Noriyuki "Pat" Morita was an American actor of Japanese descent who was well-known for playing the roles of Matsuo "Arnold" Takahashi on Happy Days and Mr. Miyagi in the The Karate Kid movie series, for which he was nominated for the Academy Award for Best Supporting Actor in 1984.-Early life:Pat...
) returns home to Okinawa with his student Daniel LaRusso (Ralph Macchio
Ralph Macchio
Ralph George Macchio is an American actor, best known for his roles as Daniel LaRusso in the Karate Kid series, Bill Gambini in My Cousin Vinny, and Johnny Cade in The Outsiders. He is also known to American television audiences for his season five recurring role as Jeremy Andretti on the...
). Although Okinawa was the setting for the film, only short scenes of the film were actually filmed in Okinawa.
The source of this article is wikipedia, the free encyclopedia.  The text of this article is licensed under the GFDL.