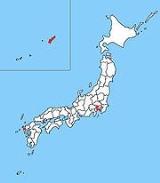 Encyclopedia
The was signed between the United States
United States
The United States of America is a federal constitutional republic comprising fifty states and a federal district...
and Japan
Japan
Japan is an island nation in East Asia. Located in the Pacific Ocean, it lies to the east of the Sea of Japan, China, North Korea, South Korea and Russia, stretching from the Sea of Okhotsk in the north to the East China Sea and Taiwan in the south...
in Washington, D.C.
Washington, D.C.
Washington, D.C., formally the District of Columbia and commonly referred to as Washington, "the District", or simply D.C., is the capital of the United States. On July 16, 1790, the United States Congress approved the creation of a permanent national capital as permitted by the U.S. Constitution....
on January 19, 1960. It strengthened Japan's ties to the West during the Cold War
Cold War
The Cold War was the continuing state from roughly 1946 to 1991 of political conflict, military tension, proxy wars, and economic competition between the Communist World—primarily the Soviet Union and its satellite states and allies—and the powers of the Western world, primarily the United States...
era. The treaty also included general provisions on the further development of international cooperation and on improved future economic cooperation.

Bilateral talks on revising the 1951 security pact began in 1959, and the new Treaty of Mutual Cooperation and Security was signed in Washington on January 19, 1960. When the pact was submitted to the Diet for ratification on February 5, it became the subject of bitter debate over the Japan-United States relationship and the occasion for violence in an all-out effort by the leftist opposition to prevent its passage. It was finally approved by the House of Representatives
House of Representatives of Japan
The is the lower house of the Diet of Japan. The House of Councillors of Japan is the upper house.The House of Representatives has 480 members, elected for a four-year term. Of these, 180 members are elected from 11 multi-member constituencies by a party-list system of proportional representation,...
on May 20. Japan Socialist Party deputies boycotted the lower house session and tried to prevent the LDP deputies from entering the chamber; they were forcibly removed by the police. Massive demonstrations and rioting by students and trade unions followed. These outbursts prevented a scheduled visit to Japan by President
President of the United States
The President of the United States of America is the head of state and head of government of the United States. The president leads the executive branch of the federal government and is the commander-in-chief of the United States Armed Forces....
Dwight D. Eisenhower
Dwight D. Eisenhower
Dwight David "Ike" Eisenhower was the 34th President of the United States, from 1953 until 1961. He was a five-star general in the United States Army...
and precipitated the resignation of Prime Minister
Prime Minister of Japan
The is the head of government of Japan. He is appointed by the Emperor of Japan after being designated by the Diet from among its members, and must enjoy the confidence of the House of Representatives to remain in office...
Nobusuke Kishi
Nobusuke Kishi
was a Japanese politician and the 56th and 57th Prime Minister of Japan from February 25, 1957 to June 12, 1958 and from then to July 19, 1960. He was often called Shōwa no yōkai .- Early life :...
, but not before the treaty was passed by default on June 19, when the House of Councillors
House of Councillors
The is the upper house of the Diet of Japan. The House of Representatives is the lower house. The House of Councillors is the successor to the pre-war House of Peers. If the two houses disagree on matters of the budget, treaties, or designation of the prime minister, the House of Representatives...
failed to vote on the issue within the required thirty days after lower house approval.

Under the treaty, both parties assumed an obligation to maintain and develop their capacities to resist armed attack in common and to assist each other in case of armed attack on territories under Japanese administration. It was understood, however, that Japan could not come to the defense of the United States because it was constitutionally forbidden to send armed forces overseas (Article 9). In particular, the constitution forbids the maintenance of "land, sea, and air forces." It also expresses the Japanese people's renunciation of "the threat or use of force as a means of settling international disputes". The scope of the new treaty did not extend to the Ryukyu Islands
Ryukyu Islands
The , also known as the , is a chain of islands in the western Pacific, on the eastern limit of the East China Sea and to the southwest of the island of Kyushu in Japan. From about 1829 until the mid 20th century, they were alternately called Luchu, Loochoo, or Lewchew, akin to the Mandarin...
, but an appended minute made clear that in case of an armed attack on the islands, both governments would consult and take appropriate action. Unlike the 1951 security pact, the new treaty provided for a ten-year term, after which it could be revoked upon one year's notice by either party.

Article 6 of the treaty contains a Status of Forces Agreement
Status of Forces Agreement
A status of forces agreement is an agreement between a host country and a foreign nation stationing forces in that country. SOFAs are often included, along with other types of military agreements, as part of a comprehensive security arrangement...
on the stationing of United States forces in Japan
United States Forces Japan
The refers to the various divisions of the United States Armed Forces that are stationed in Japan. Under the Treaty of Mutual Cooperation and Security between the United States and Japan, the United States is obliged to defend Japan in close cooperation with the Japan Self-Defense Forces for...
, with specifics on the provision of facilities and areas for their use and on the administration of Japanese citizens employed in the facilities.
The Agreed Minutes to the treaty specified that the Japanese government
Government of Japan
The government of Japan is a constitutional monarchy where the power of the Emperor is very limited. As a ceremonial figurehead, he is defined by the 1947 constitution as "the symbol of the state and of the unity of the people". Power is held chiefly by the Prime Minister of Japan and other elected...
must be consulted prior to major changes in United States force deployment in Japan or to the use of Japanese bases for combat operations other than in defense of Japan itself. Also covered are the limits of the two countries' jurisdictions over crimes committed in Japan by United States military personnel.

The Mutual Security Assistance Pact of 1954 initially involved a military aid program that provided for Japan's acquisition of funds, matériel, and services for the nation's essential defense. Although Japan no longer received any aid from the United States by the 1960s, the agreement continued to serve as the basis for purchase and licensing agreements ensuring interoperability of the two nations' weapons and for the release of classified data to Japan, including both international intelligence reports and classified technical information.

A central issue in the debate over the continued US military presence is the concentration of troops on the small Japanese prefecture of Okinawa. Nearly 75 percent of the US Forces Japan including 45,000 service members and DOD civilians, and 44,000 plus military dependents are located in Okinawa, which makes up less than one percent of Japan’s landmass (Packard, 2010). The US military bases cover about one-fifth of Okinawa* (Sumida, 2009). This has left many Okinawans feeling that while the security agreement may be beneficial to the United States and Japan as a whole, it is burdensome on the residents of the small subtropical island.

Another contentious issue to many Okinawans is the noise and environmental pollution created by the US Forces Japan. Excessive noise lawsuits in 2009 filed by Okinawa’s residents against Kadena Air Base and MCAS Futenma resulted in awards of $57 million** and $1.3 million*** dollars to residents, respectively (Sumida, 2009). Also, environmental pollution is a major issue. A large portion of Okinawa’s income is from tourism, primarily from tourists coming to appreciate the islands natural beauty and the coral reef that surrounds it. However, runoff from live fire exercises is damaging the reef (JCP, 2000). The most powerful opposition in Okinawa, however, is as a result of the criminal acts committed by US service members and their dependants. The most obvious example is the 1995 kidnapping and rape of a 12 year old Okinawan girl by two Marines and a Navy Corpsman (Packard, 2010). This crime called into serious question the SOFA agreement, particularly the jurisdiction over US military members in regards to crimes committed off post. It also seemed to be a breaking point for most Okinawans. Widespread protests occurred, and then US Secretary of State William Perry worked on an agreement with the Japanese government to reduce the number of US military members on the island (Packard, 2010).

In a 2006 agreement between the Bush administration and the Japanese government, MCAS Futenma was to be relocated to the northern Okinawa city of Nago, and 8,000 Marines and their dependants were to be relocated to Guam (Packard, 2010). This agreement, however, received very little support from Okinawans and the promise to overturn it was a major factor in helping former Prime Minister Yukio Hatoyama being elected to office. After spending several months deliberating over where the base would move to, Hatoyama conceded to allow the original agreement to go forward and immediately resigned after stating he failed to fulfill one of his crucial promises to the Japanese people.

A final, but crucial issue, in the debate of US military presence in Okinawa is the fact that Okinawans are as a whole pacifists (JCP, 2000). Before the Japanese annexed Okinawa and its subordinate islands, it was its own independent nation with a relatively small military. After the escalation of World War 2, however, Japanese forces occupied the island and staged it as its last stand if the War turned against their favor. In the Battle of Okinawa
Battle of Okinawa
The Battle of Okinawa, codenamed Operation Iceberg, was fought on the Ryukyu Islands of Okinawa and was the largest amphibious assault in the Pacific War of World War II. The 82-day-long battle lasted from early April until mid-June 1945...
, their deadliest battle in the last century, over 250,000 people were killed. Of those killed, nearly 150,000 were Okinawans, either civilians or conscripts forced to fight (Frank, 2010). After the war ended, Okinawans were forced to endure the US occupation that occurred as a result of Tokyo’s decisions. This left many Okinawans embittered towards the Japanese government and the US military.

Despite strong Okinawan opposition to the US military presence on the island, there is also strong support for the agreement. Due to fear of a new imperialistic Japan, US forces forced Japanese lawmakers to forbid Japan to maintain more than a self-defense sized military when drafting the post-War Constitution. As a result Japan has never spent more than one percent of ts GDP on military expenditures (Englehardt, 2010). In return for allowing the US military presence in Japan, the United States agrees to help defend Japan against any foreign adversaries, such as North Korea.
In addition to military support, the military presence in Okinawa contributes to the economy of Japan’s poorest prefecture. As of 2004, 8,813 locals worked on bases, in addition to numerous others who work in shops and bars where the main customer base is US service members. Altogether, the US presence accounts for about 5 percent of the Okinawan economy (Fukumura, 2007). However, since the US bases occupy 20% of the main island, and many of them are in choice locations, in effect Okinawa's economy is suffering a deadweight loss of 15% per year. However, this may be lifted, since as of 2011, the US has agreed to move its military base from Okinawa to Guam following the natural disasters and nuclear issues in Japan.