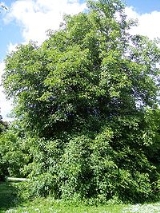 It is native primarily to the Midwestern and lower Great Plains
Great Plains
The Great Plains are a broad expanse of flat land, much of it covered in prairie, steppe and grassland, which lies west of the Mississippi River and east of the Rocky Mountains in the United States and Canada. This area covers parts of the U.S...
regions of the United States, extending southeast into the Nashville Basin
Nashville Basin
The Nashville Basin, also known as the Central Basin, is a term often used to describe the area surrounding Nashville, Tennessee. The Central Basin was caused by an uplifting known as the Nashville Dome. The Nashville Dome is evidenced by the underlying rock strata that all dip downwards away from...
. It is also found locally in the extreme southwest of Ontario
Ontario
Ontario is a province of Canada, located in east-central Canada. It is Canada's most populous province and second largest in total area. It is home to the nation's most populous city, Toronto, and the nation's capital, Ottawa....
, on Walpole Island
Walpole Island
Walpole Island is an island and Indian reserve in southwestern Ontario, Canada, on the border between Ontario and Michigan in the United States. It is located in the mouth of the St. Clair River on Lake St. Clair, approximately thirty miles northeast of Detroit, Michigan, and Windsor, Ontario.In...
in Lake St. Clair
Lake Saint Clair (North America)
Lake St. Clair is a fresh-water lake named after Clare of Assisi that lies between the Province of Ontario and the State of Michigan, and its midline also forms the boundary between Canada and the United States of America. Lake St. Clair includes the Anchor Bay along the Metro Detroit coastline...
, and in isolated populations in the South
Southern United States
The Southern United States—commonly referred to as the American South, Dixie, or simply the South—constitutes a large distinctive area in the southeastern and south-central United States...
. It is a medium-sized deciduous
Deciduous
Deciduous means "falling off at maturity" or "tending to fall off", and is typically used in reference to trees or shrubs that lose their leaves seasonally, and to the shedding of other plant structures such as petals after flowering or fruit when ripe...
tree
Tree
A tree is a perennial woody plant. It is most often defined as a woody plant that has many secondary branches supported clear of the ground on a single main stem or trunk with clear apical dominance. A minimum height specification at maturity is cited by some authors, varying from 3 m to...
growing to 15–25 m (50–82 ft.) tall.

The leaves
Leaf
A leaf is an organ of a vascular plant, as defined in botanical terms, and in particular in plant morphology. Foliage is a mass noun that refers to leaves as a feature of plants....
are palmately compound with five (rarely seven) leaflets, 8–16 cm (3-6 in.) long and broad. The flower
Flower
A flower, sometimes known as a bloom or blossom, is the reproductive structure found in flowering plants . The biological function of a flower is to effect reproduction, usually by providing a mechanism for the union of sperm with eggs...
s are produced in panicle
Panicle
A panicle is a compound raceme, a loose, much-branched indeterminate inflorescence with pedicellate flowers attached along the secondary branches; in other words, a branched cluster of flowers in which the branches are racemes....
s in spring, yellow to yellow-green, each flower 2–3 cm (3/4 - 1⅛ in.) long with the stamens longer than the petals (unlike the related Yellow Buckeye
Yellow Buckeye
Yellow Buckeye is a species of buckeye native to the Ohio Valley and Appalachian Mountains of the Eastern United States. It is a medium-sized deciduous tree growing to 20–47 m tall...
, where the stamens are shorter than the petals). The fruit
Fruit
In broad terms, a fruit is a structure of a plant that contains its seeds.The term has different meanings dependent on context. In non-technical usage, such as food preparation, fruit normally means the fleshy seed-associated structures of certain plants that are sweet and edible in the raw state,...
is a round or oblong spiny capsule 4–5 cm (1½ - 2 in.)diameter, containing 1-3 nut
Nut (fruit)
A nut is a hard-shelled fruit of some plants having an indehiscent seed. While a wide variety of dried seeds and fruits are called nuts in English, only a certain number of them are considered by biologists to be true nuts...
-like seed
Seed
A seed is a small embryonic plant enclosed in a covering called the seed coat, usually with some stored food. It is the product of the ripened ovule of gymnosperm and angiosperm plants which occurs after fertilization and some growth within the mother plant...
s, 2–3 cm (3/4 - 1⅛ in.) in diameter, brown with a whitish basal scar.

The fruits contain tannic acid
Tannic acid
Tannic acid is a specific commercial form of tannin, a type of polyphenol. Its weak acidity is due to the numerous phenol groups in the structure...
, and are poisonous for cattle
Cattle
Cattle are the most common type of large domesticated ungulates. They are a prominent modern member of the subfamily Bovinae, are the most widespread species of the genus Bos, and are most commonly classified collectively as Bos primigenius...
, and possibly humans. Native Americans would blanch them, extracting the tannic acid for use in leather.

Subsequently, the word was used as the nickname of The Ohio State University's sports teams, was adopted officially by the school as its nickname in 1950, and came to be applied to any student or graduate of the university. The buckeye confection, made to resemble the tree's nut, is made by dipping a ball of peanut butter
Peanut butter
Peanut butter is a food paste made primarily from ground dry roasted peanuts, popular in North America, Netherlands, United Kingdom, and parts of Asia, particularly the Philippines and Indonesia. It is mainly used as a sandwich spread, sometimes in combination as in the peanut butter and jelly...
fudge in milk chocolate, leaving a circle of the peanut butter exposed. These are a popular treat in Ohio, especially during the Christmas
Christmas
Christmas or Christmas Day is an annual holiday generally celebrated on December 25 by billions of people around the world. It is a Christian feast that commemorates the birth of Jesus Christ, liturgically closing the Advent season and initiating the season of Christmastide, which lasts twelve days...
and NCAA college football seasons.

In addition to using the tannic acid for leatherworking, Native Americans would roast and peel the nut, and mash the contents into a nutritional meal they called "hetuck".

The buckeye nuts can also be dried, turning dark as they harden with exposure to the air, and strung onto necklaces.