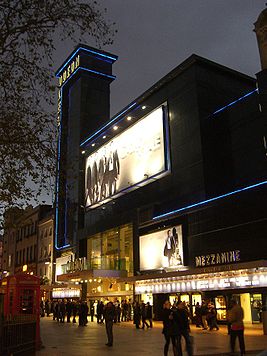 The Odeon Leicester Square is a cinema
Movie theater
A movie theater, cinema, movie house, picture theater, film theater is a venue, usually a building, for viewing motion pictures ....
which occupies the centre of the eastern side of Leicester Square
Leicester Square
Leicester Square is a pedestrianised square in the West End of London, England. The Square lies within an area bound by Lisle Street, to the north; Charing Cross Road, to the east; Orange Street, to the south; and Whitcomb Street, to the west...
, London
London
London is the capital city of :England and the :United Kingdom, the largest metropolitan area in the United Kingdom, and the largest urban zone in the European Union by most measures. Located on the River Thames, London has been a major settlement for two millennia, its history going back to its...
, dominating the square with its huge black polished granite
Granite
Granite is a common and widely occurring type of intrusive, felsic, igneous rock. Granite usually has a medium- to coarse-grained texture. Occasionally some individual crystals are larger than the groundmass, in which case the texture is known as porphyritic. A granitic rock with a porphyritic...
facade
Facade
A facade or façade is generally one exterior side of a building, usually, but not always, the front. The word comes from the French language, literally meaning "frontage" or "face"....
and 120 feet (37 m) high tower displaying its name. Blue neon
Neon sign
Neon signs are made using electrified, luminous tube lights that contain rarefied neon or other gases. They are the most common use for neon lighting, which was first demonstrated in a modern form in December, 1910 by Georges Claude at the Paris Motor Show. While they are used worldwide, neon signs...
outlines the exterior of the building at night. It was built to be the flagship of Oscar Deutsch
Oscar Deutsch
Oscar Deutsch was the founder of the Odeon Cinemas chain in the United Kingdom.-Life and career:Deutsch was born in Balsall Heath, Birmingham, England, the son of Leopold Deutsch, a successful Hungarian Jewish scrap metal merchant. After attending King Edward VI Five Ways, he opened his first...
's Odeon Cinema Circuit and still holds that position today. It hosts numerous European and World film premieres including the annual Royal Film Performance
Royal Film Performance
The Royal Film Performance is a charity performance of a British film which is attended by members of the British Royal Family. The proceeds from the evening's entertainment are donated to the Cinema and Television Benevolent Fund, a charity which offers financial support to people from the film,...
.

The Odeon is the largest single-screen cinema in the United Kingdom
United Kingdom
The United Kingdom of Great Britain and Northern IrelandIn the United Kingdom and Dependencies, other languages have been officially recognised as legitimate autochthonous languages under the European Charter for Regional or Minority Languages...
and one of the few with its circle and stalls remaining intact. The cinema is fully equipped to show films in 35mm, 70mm and digital
Digital cinema
Digital cinema refers to the use of digital technology to distribute and project motion pictures. A movie can be distributed via hard drives, optical disks or satellite and projected using a digital projector instead of a conventional film projector...
on a large screen, as well as extensive stage facilities for the occasional live show.

The cinema still has an operating Compton
John Compton (organ builder)
John Compton , born in Newton Burgoland, Leicestershire, was a pipe organ builder. His business based in Nottingham and London flourished between 1902 and 1965.-Life:...
organ
Theatre organ
A theatre organ is a pipe organ originally designed specifically for imitation of an orchestra. New designs have tended to be around some of the sounds and blends unique to the instrument itself....
, its console lit from within by coloured lighting, and a safety curtain
Safety curtain
A safety curtain is a fire safety precaution used in large proscenium theatres. It is usually a heavy fibreglass or iron curtain located immediately behind the proscenium arch. Asbestos-based materials were originally used to manufacture the curtain, before the dangers of asbestos were discovered...
detailed in 1930s art-deco motifs.

Two sets of tabs (curtains) are also installed and used for most performances. The cinema houses all major digital sound systems: SDDS
SDDS
Sony Dynamic Digital Sound is a cinema sound system developed by Sony. Compressed digital sound information is recorded on both outer edges of the 35 mm film release print. The system supports up to eight independent channels of sound: five front channels, two surround channels and a single...
, Dolby Digital
Dolby Digital
Dolby Digital is the name for audio compression technologies developed by Dolby Laboratories. It was originally called Dolby Stereo Digital until 1994. Except for Dolby TrueHD, the audio compression is lossy. The first use of Dolby Digital was to provide digital sound in cinemas from 35mm film prints...
and DTS. It had the UK's first wide-screen installed in 1953, and more recently, was the first to have a digital projector installed in 1999.

There are 1683 seats – reduced from nearly 2000 to make way for greater leg-room – with a large circle bar and even 'Royal Retiring Room' for visiting monarchs. Seating is divided between the Royal Circle, Rear Circle and Stalls.

In March 2011, all the cinema's screens converted to Digital Projection equipment with 3D capability. Up until 2009 the cinema and film distributors did not have faith in the reliability of digital presentations, so the cinema would run a 35mm print along side. If the digital show failed the projectionist would switch to film. If the show were to fail now the performance will be abandoned. One 35mm /70mm projector has been retained, but is very rarely used. A silver screen is used for 3D presentations which is placed in front of the white screen used for 2d presentations. The silver screen is a fraction smaller and screen tabs are not used during 3D performances. Most of the trained projectionists at the Odeon retired or made redundant in 2011. Presentations are now mostly automated.

The Odeon was built in 1937 to the design of Harry Weedon
Harry Weedon
Harold William "Harry" Weedon was an English architect. Although he designed a large number of buildings during a long career, he is best known for his role overseeing the Art Deco designs of the Odeon Cinemas for Oscar Deutsch in the 1930s...
and Andrew Mather on the site of the Turkish Baths and the adjoining Alhambra Theatre
Alhambra Theatre
The Alhambra was a popular theatre and music hall located on the east side of Leicester Square, in the West End of London. It was built originally as The Royal Panopticon of Science and Arts opening on 18 March 1854. It was closed after two years and reopened as the Alhambra. The building was...
a large music hall
Music hall
Music Hall is a type of British theatrical entertainment which was popular between 1850 and 1960. The term can refer to:# A particular form of variety entertainment involving a mixture of popular song, comedy and speciality acts...
dating from the 1850s. The site cost £550,000, the cinema took seven months to build at a cost of £232,755 with 2116 seats. The opening night was Tuesday 2 November 1937, the film shown that night was The Prisoner of Zenda
The Prisoner of Zenda (1937 film)
The Prisoner of Zenda is a 1937 black-and-white adventure film based on the Anthony Hope 1894 novel of the same name and the 1896 play. Of the many film adaptations, this is considered by many to be the definitive version....
.

Until 1967, the interior was a magnificent art-deco auditorium, with a ribbed ceiling, concealing stripped lighting. Two bas relief sculptures of naked nymph
Nymph
A nymph in Greek mythology is a female minor nature deity typically associated with a particular location or landform. Different from gods, nymphs are generally regarded as divine spirits who animate nature, and are usually depicted as beautiful, young nubile maidens who love to dance and sing;...
s were positioned on the side walls, as if leaping towards the screen. All the seats were covered in a faux-leopard skin material. A rather misguided modernisation in 1967 destroyed most of this grandeur, although since the 1980s, restoration programmes have restored much of the detail, including the figures, seating pattern and much of the ribbed effect on the ceiling.

The first wide-screen (screen ratio 1.66:1) ever installed in Great Britain
Great Britain
Great Britain or Britain is an island situated to the northwest of Continental Europe. It is the ninth largest island in the world, and the largest European island, as well as the largest of the British Isles...
was premiered on 14 May 1953, the film shown was Tonight We Sing
Tonight We Sing
Tonight We Sing is a 1953 musical biopic film, directed by Mitchell Leisen, based on the life and career of the celebrated impresario Sol Hurok. It stars David Wayne and Ezio Pinza.-Cast:*David Wayne as Sol Hurok*Ezio Pinza as Feodor Chaliapin...
. The British debut of Cinemascope
CinemaScope
CinemaScope was an anamorphic lens series used for shooting wide screen movies from 1953 to 1967. Its creation in 1953, by the president of 20th Century-Fox, marked the beginning of the modern anamorphic format in both principal photography and movie projection.The anamorphic lenses theoretically...
(screen ratio 2.55:1) following soon after on the 19th November 1953 with the quasi-biblical epic, The Robe
The Robe
The Robe is a 1942 historical novel about the Crucifixion written by Lloyd C. Douglas. The book was one of the best-selling titles of the 1940s. It entered the New York Times Best Seller list in October 1942, and four weeks later rose to No. 1. It held the position for nearly a year...
.

After Nigel Wolland's retirement in 2006, Mark Nice was appointed the Cinemas Chief Engineer.

Tucked next door is the Odeon
Odeon Cinemas
Odeon Cinemas is a British chain of cinemas, one of the largest in Europe. It is owned by Odeon & UCI Cinemas Group whose ultimate parent is Terra Firma Capital Partners.-History:Odeon Cinemas was created in 1928 by Oscar Deutsch...
mezzanine
Mezzanine (architecture)
In architecture, a mezzanine or entresol is an intermediate floor between main floors of a building, and therefore typically not counted among the overall floors of a building. Often, a mezzanine is low-ceilinged and projects in the form of a balcony. The term is also used for the lowest balcony in...
, containing five much smaller screens, each seating between 50 and 60 patrons. The site of this 'mini-plex' was once an alleyway running alongside the main house, until development in 1988 turned it into one of London's first 'mini-plex' cinemas.