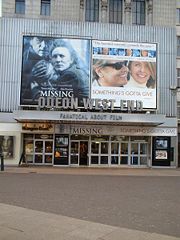 The Odeon West End is a cinema
Movie theater
A movie theater, cinema, movie house, picture theater, film theater is a venue, usually a building, for viewing motion pictures ....
on the south side of Leicester Square
Leicester Square
Leicester Square is a pedestrianised square in the West End of London, England. The Square lies within an area bound by Lisle Street, to the north; Charing Cross Road, to the east; Orange Street, to the south; and Whitcomb Street, to the west...
, London
London
London is the capital city of :England and the :United Kingdom, the largest metropolitan area in the United Kingdom, and the largest urban zone in the European Union by most measures. Located on the River Thames, London has been a major settlement for two millennia, its history going back to its...
. It contains two screens—screen 1 seats 500 and screen 2 seats 832 http://www.odeon.co.uk/fanatic/auditorium_information/s139/. Both house large screens in comfortable auditoria. It is often used for smaller film premieres, and yearly hosts the BFI
British Film Institute
The British Film Institute is a charitable organisation established by Royal Charter to:-Cinemas:The BFI runs the BFI Southbank and IMAX theatre, both located on the south bank of the River Thames in London...
London Film Festival
London Film Festival
The BFI London Film Festival is the UK's largest public film event, screening more than 300 features, documentaries and shorts from almost 50 countries. The festival, , currently in its 54th year, is run every year in the second half of October under the umbrella of the British Film Institute...
.

The Odeon was built in 1930 as The Leicester Square Theatre, a name it largely remained with until 1988. The theatre was built as a cine-variety venue for Jack Buchanan
Jack Buchanan
Walter John "Jack" Buchanan was a British theatre and film actor, singer, producer and director. He was known for three decades as the embodiment of the debonair man-about-town in the tradition of George Grossmith Jr., and was described by The Times as "the last of the knuts." He is best known in...
- a penthouse apartment was housed on the roof for the star - and showcased both film and short variety performances, before going over to film on a more permanent basis. A large single screen was housed in an ornate, three-tiered auditorium.

It was sold to J. Arthur Rank
J. Arthur Rank
Joseph Arthur Rank, 1st Baron Rank was a British industrialist and film producer, and founder of the Rank Organisation, now known as The Rank Group Plc.- Family business :...
in 1937 and became Rank's first cinema, although not named Odeon for many years to come.

The cinema was modernised in 1968 into a much blander shell, based around a remodelled stalls and single circle and was twinned into a two-screen venue in 1988 (Screen 1 in the former circle and Screen 2 in the stalls) and renamed Odeon West End.

Odeon
Odeon Cinemas
Odeon Cinemas is a British chain of cinemas, one of the largest in Europe. It is owned by Odeon & UCI Cinemas Group whose ultimate parent is Terra Firma Capital Partners.-History:Odeon Cinemas was created in 1928 by Oscar Deutsch...
sold the site in February 2006, although continuing to operate as part of the Odeon chain until redevelopment plans are finalised. Provisional plans have been drawn up to convert the site into a hotel complex. Two smaller Odeon screens will be incorporated into the basement.

Stephen Larcombe, Chief Technician, used to stay in Jack Buchanan's flat on the roof of the theatre during the London Film Festival to save having to go home every night.