Encyclopedia
An odd-eyed cat is a cat
Cat
The cat , also known as the domestic cat or housecat to distinguish it from other felids and felines, is a small, usually furry, domesticated, carnivorous mammal that is valued by humans for its companionship and for its ability to hunt vermin and household pests...
with one blue
Blue
Blue is a colour, the perception of which is evoked by light having a spectrum dominated by energy with a wavelength of roughly 440–490 nm. It is considered one of the additive primary colours. On the HSV Colour Wheel, the complement of blue is yellow; that is, a colour corresponding to an equal...
eye
Eye
Eyes are organs that detect light and convert it into electro-chemical impulses in neurons. The simplest photoreceptors in conscious vision connect light to movement...
and one green
Green
Green is a color, the perception of which is evoked by light having a spectrum dominated by energy with a wavelength of roughly 520–570 nanometres. In the subtractive color system, it is not a primary color, but is created out of a mixture of yellow and blue, or yellow and cyan; it is considered...
, yellow
Yellow
Yellow is the color evoked by light that stimulates both the L and M cone cells of the retina about equally, with no significant stimulation of the S cone cells. Light with a wavelength of 570–590 nm is yellow, as is light with a suitable mixture of red and green...
or brown
Brown
Brown is a color term, denoting a range of composite colors produced by a mixture of orange, red, rose, or yellow with black or gray. The term is from Old English brún, in origin for any dusky or dark shade of color....
eye. It is a feline
Felinae
Felinae is a subfamily of the family Felidae which includes the genera and species listed below. Most are small to medium-sized cats, although the group does include some larger animals, such as the Cougar and Cheetah....
form of complete heterochromia
Heterochromia
In anatomy, heterochromia refers to a difference in coloration, usually of the iris but also of hair or skin. Heterochromia is a result of the relative excess or lack of melanin...
, a condition which occurs in some other animals. The condition most commonly affects white colored cats but can be found in a cat of any color, as long as it possesses the white spotting gene
Cat coat genetics
The genetics of cat coat coloration, pattern, length, and texture is a complex subject, and many different genes are involved.- Genes involved in albinism, dominant white, and white spotting :...
.

The odd-eyed coloring is caused when either the epistatic (dominant) white gene (which masks any other color genes and turns a cat completely white) or the white spotting gene (which is the gene responsible for bicolor
Bicolor cat
A bicolor cat has white fur combined with fur of some other color, for example black or tabby. There are various patterns of bicolor cat. These range from Van pattern through to solid color with a throat locket...
and tuxedo cats) prevents melanin
Melanin
Melanin is a pigment that is ubiquitous in nature, being found in most organisms . In animals melanin pigments are derivatives of the amino acid tyrosine. The most common form of biological melanin is eumelanin, a brown-black polymer of dihydroxyindole carboxylic acids, and their reduced forms...
(pigment
Pigment
A pigment is a material that changes the color of reflected or transmitted light as the result of wavelength-selective absorption. This physical process differs from fluorescence, phosphorescence, and other forms of luminescence, in which a material emits light.Many materials selectively absorb...
) granules from reaching one eye during development
Developmental biology
Developmental biology is the study of the process by which organisms grow and develop. Modern developmental biology studies the genetic control of cell growth, differentiation and "morphogenesis", which is the process that gives rise to tissues, organs and anatomy.- Related fields of study...
, resulting in a cat with one blue eye and one green, yellow or brown eye. It only rarely occurs in cats that lack both the dominant white and the white spotting gene.

As all cats are blue-eyed as kittens, the differences in an odd-eyed kitten's eye color might not be noticeable save upon close inspection. Odd-eyed kittens have a different shade of blue in one eye. The color of the odd eye changes over a period of months, for example, from blue to green to yellow or from green to blue to yellow, until it reaches its final, adult color.

Odd-eyed cats are popular within several breeds, including Turkish Van
Turkish Van
The Turkish Van is a recognized cat breed that is known for its unusual love of water and swimming. They were created from the cats native to the Lake Van area of Turkey. The cats of this type are named in Turkish Van Kedisi , in Armenian vana katou or vana gadou and in Kurdish...
, Turkish Angora
Turkish Angora
The Turkish Angora is a breed of domestic cat. Turkish Angoras are one of the ancient, naturally occurring cat breeds, having originated in central Turkey, in the Ankara region...
, Sphynx
Sphynx (cat)
The Sphynx is a rare breed of cat known for its lack of a coat.The contemporary breed of Sphynx started in 1966, in Roncesvalles, Toronto when a hairless kitten named Prune was born. The kitten was mated with its mother , which produced one more naked kitten...
, Persian, Oriental Shorthair
Oriental Shorthair
The Siamese cat was imported to Britain from Siam in the later half of the 1800s. According to reports, both pointed and solid colors were imported. The gene that causes the color to be restricted to the points is a recessive gene, therefore the general population of the cats of Siam were largely...
, and Japanese Bobtail.

In 1917, the government of Turkey, in conjunction with the Ankara
Ankara
Ankara is the capital of Turkey and the country's second largest city after Istanbul. The city has a mean elevation of , and as of 2010 the metropolitan area in the entire Ankara Province had a population of 4.4 million....
Zoo
Zoo
A zoological garden, zoological park, menagerie, or zoo is a facility in which animals are confined within enclosures, displayed to the public, and in which they may also be bred....
, began a meticulous breeding program to preserve and protect pure white Turkish Angora
Turkish Angora
The Turkish Angora is a breed of domestic cat. Turkish Angoras are one of the ancient, naturally occurring cat breeds, having originated in central Turkey, in the Ankara region...
cats with blue and amber eyes, a program that continues today, as they are considered a national treasure
National treasure
The idea of national treasure, like national epics and national anthems, is part of the language of Romantic nationalism, which arose in the late 18th century and 19th centuries. Nationalism is an ideology which supports the nation as the fundamental unit of human social life, which includes shared...
. The zoo specifically prized the odd-eyed Angoras that had one blue eye and one amber eye, as the Turkish folklore
Folklore
Folklore consists of legends, music, oral history, proverbs, jokes, popular beliefs, fairy tales and customs that are the traditions of a culture, subculture, or group. It is also the set of practices through which those expressive genres are shared. The study of folklore is sometimes called...
suggests that "the eyes must be as green as the lake and as blue as the sky." The mascot of the 2010 FIBA World Championship
2010 FIBA World Championship
The 2010 FIBA World Championship, hosted by Turkey, was the international basketball competition contested by the men's national teams. The tournament ran from August 28 to September 12, 2010. It was co-organized by the International Basketball Federation , Turkish Basketball Federation and the...
, hosted by Turkey, was an anthropomorphized odd-eyed Van Cat named "Bascat".

Muhammad
Muhammad
Muhammad |ligature]] at U+FDF4 ;Arabic pronunciation varies regionally; the first vowel ranges from ~~; the second and the last vowel: ~~~. There are dialects which have no stress. In Egypt, it is pronounced not in religious contexts...
's pet Angora, Muezza, was reputed to be an odd-eyed cat.

In the Japanese Bobtail, odd-eyed cats are most frequently found in calico
Calico cats
Calico cats are domestic cats with a spotted or parti-colored coat, usually predominantly white with orange and black patches. Outside of North America the pattern is more usually called tortoiseshell-and-white. In the province of Quebec, they are unofficially considered a breed by the...
individuals.

There is a common misconception that all odd-eyed cats are born deaf in one ear. This is not true, as about 60%–70% of odd-eyed cats can hear. About 10%–20% of normal-eyed cats are born deaf or become deaf as part of the feline aging process. White cats with one or two blue eyes do, however, have a higher incidence of genetic
Genetics
Genetics , a discipline of biology, is the science of genes, heredity, and variation in living organisms....
deafness, with the white gene occasionally causing the degeneration
Degeneration
The idea of degeneration had significant influence on science, art and politics from the 1850s to the 1950s. The social theory developed consequently from Charles Darwin's Theory of Evolution...
of the cochlea
Cochlea
The cochlea is the auditory portion of the inner ear. It is a spiral-shaped cavity in the bony labyrinth, making 2.5 turns around its axis, the modiolus....
, beginning a few days after birth. See also deafness in white cats
Deaf white cat
Some white cats suffer from congenital deafness caused by degeneration of the inner ear. This condition is associated with blue irises. In white cats with mixed-coloured eyes , it has been found that deafness is more likely to affect the ear on the blue-eyed side...
. 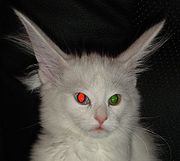