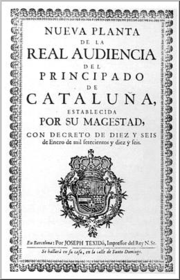 The Nueva Planta decrees were a number of decree
Decree
A decree is a rule of law issued by a head of state , according to certain procedures . It has the force of law...
s signed between 1707 and 1716 by Philip V
Philip V of Spain
Philip V was King of Spain from 15 November 1700 to 15 January 1724, when he abdicated in favor of his son Louis, and from 6 September 1724, when he assumed the throne again upon his son's death, to his death.Before his reign, Philip occupied an exalted place in the royal family of France as a...
—the first Bourbon
House of Bourbon
The House of Bourbon is a European royal house, a branch of the Capetian dynasty . Bourbon kings first ruled Navarre and France in the 16th century. By the 18th century, members of the Bourbon dynasty also held thrones in Spain, Naples, Sicily, and Parma...
king of Spain
Spain
Spain , officially the Kingdom of Spain languages]] under the European Charter for Regional or Minority Languages. In each of these, Spain's official name is as follows:;;;;;;), is a country and member state of the European Union located in southwestern Europe on the Iberian Peninsula...
—during and shortly after the end of the War of the Spanish Succession
War of the Spanish Succession
The War of the Spanish Succession was fought among several European powers, including a divided Spain, over the possible unification of the Kingdoms of Spain and France under one Bourbon monarch. As France and Spain were among the most powerful states of Europe, such a unification would have...
which he won.

Taking his native France
France
The French Republic , The French Republic , The French Republic , (commonly known as France , is a unitary semi-presidential republic in Western Europe with several overseas territories and islands located on other continents and in the Indian, Pacific, and Atlantic oceans. Metropolitan France...
as a model of a centralized state, Philip V suppressed the institutions, privileges, and the ancient charters
Fuero
Fuero , Furs , Foro and Foru is a Spanish legal term and concept.The word comes from Latin forum, an open space used as market, tribunal and meeting place...
(Spanish: fueros, Catalan: furs) of almost all the areas that were formerly part of the Crown of Aragon
Crown of Aragon
The Crown of Aragon Corona d'Aragón Corona d'Aragó Corona Aragonum controlling a large portion of the present-day eastern Spain and southeastern France, as well as some of the major islands and mainland possessions stretching across the Mediterranean as far as Greece...
(Aragon
Kingdom of Aragon
The Kingdom of Aragon was a medieval and early modern kingdom in the Iberian Peninsula, corresponding to the modern-day autonomous community of Aragon, in Spain...
, Catalonia
Principality of Catalonia
The Principality of Catalonia , is a historic territory in the northeastern Iberian Peninsula, mostly in Spain and with an adjoining portion in southern France....
, Valencia
Kingdom of Valencia
The Kingdom of Valencia , located in the eastern shore of the Iberian Peninsula, was one of the component realms of the Crown of Aragon. When the Crown of Aragon merged by dynastic union with the Crown of Castile to form the Kingdom of Spain, the Kingdom of Valencia became a component realm of the...
, and the Balearic Islands
Kingdom of Majorca
The Kingdom of Majorca was founded by James I of Aragon, also known as James The Conqueror. After the death of his first-born son Alfonso, a will was written in 1262 which created the kingdom in order to cede it to his son James...
). The decrees ruled that all the territories in the Crown of Aragon except the Aran Valley were to be ruled by the laws of Castile
Crown of Castile
The Crown of Castile was a medieval and modern state in the Iberian Peninsula that formed in 1230 as a result of the third and definitive union of the crowns and parliaments of the kingdoms of Castile and León upon the accession of the then King Ferdinand III of Castile to the vacant Leonese throne...
("the most praiseworthy in all the Universe" according to the 1707 decree), embedding these regions in a new, and nearly uniformly administered, centralized Spain. Other historic territories such as Navarre
Navarre
Navarre , officially the Chartered Community of Navarre is an autonomous community in northern Spain, bordering the Basque Country, La Rioja, and Aragon in Spain and Aquitaine in France...
and the Basque Country
Basque Country (autonomous community)
The Basque Country is an autonomous community of northern Spain. It includes the Basque provinces of Álava, Biscay and Gipuzkoa, also called Historical Territories....
, which supported Philip V during the war, kept using their own charter
Charter
A charter is the grant of authority or rights, stating that the granter formally recognizes the prerogative of the recipient to exercise the rights specified...
s.

These acts constituted the first realization of Spain as a centralized state and were meant both as a modernizing element, in line with other European countries where the monarchs were increasing their powers, and also as a punishment on these territories which had fought against Philip V in the War of Succession. Top civil servants were appointed directly from Madrid
Madrid
Madrid is the capital and largest city of Spain. The population of the city is roughly 3.3 million and the entire population of the Madrid metropolitan area is calculated to be 6.271 million. It is the third largest city in the European Union, after London and Berlin, and its metropolitan...
, the king's court city, and most institutions in these territories were abolished. Court cases could only be presented and argued in Castilian
Spanish language
Spanish , also known as Castilian , is a Romance language in the Ibero-Romance group that evolved from several languages and dialects in central-northern Iberia around the 9th century and gradually spread with the expansion of the Kingdom of Castile into central and southern Iberia during the...
, which became the sole language of government, displacing Latin, Catalan
Catalan language
Catalan is a Romance language, the national and only official language of Andorra and a co-official language in the Spanish autonomous communities of Catalonia, the Balearic Islands and Valencian Community, where it is known as Valencian , as well as in the city of Alghero, on the Italian island...
and other Spanish languages.