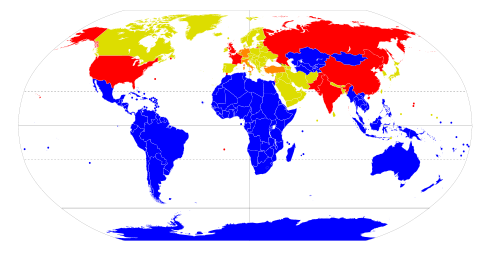 Nuclear sharing is a concept in NATO's policy of nuclear deterrence
Deterrence theory
Deterrence theory gained increased prominence as a military strategy during the Cold War with regard to the use of nuclear weapons, and features prominently in current United States foreign policy regarding the development of nuclear technology in North Korea and Iran. Deterrence theory however was...
, which involves member countries without nuclear weapon
Nuclear weapon
A nuclear weapon is an explosive device that derives its destructive force from nuclear reactions, either fission or a combination of fission and fusion. Both reactions release vast quantities of energy from relatively small amounts of matter. The first fission bomb test released the same amount...
s of their own in the planning for the use of nuclear weapons by NATO, and in particular provides for the armed forces
Armed forces
The armed forces of a country are its government-sponsored defense, fighting forces, and organizations. They exist to further the foreign and domestic policies of their governing body, and to defend that body and the nation it represents from external aggressors. In some countries paramilitary...
of these countries to be involved in delivering these weapons in the event of their use.

Of the three nuclear powers in NATO (France
France
The French Republic , The French Republic , The French Republic , (commonly known as France , is a unitary semi-presidential republic in Western Europe with several overseas territories and islands located on other continents and in the Indian, Pacific, and Atlantic oceans. Metropolitan France...
, the United Kingdom
United Kingdom
The United Kingdom of Great Britain and Northern IrelandIn the United Kingdom and Dependencies, other languages have been officially recognised as legitimate autochthonous languages under the European Charter for Regional or Minority Languages...
and the United States
United States
The United States of America is a federal constitutional republic comprising fifty states and a federal district...
), only the United States has provided weapons for nuclear sharing. , Belgium
Belgium
Belgium , officially the Kingdom of Belgium, is a federal state in Western Europe. It is a founding member of the European Union and hosts the EU's headquarters, and those of several other major international organisations such as NATO.Belgium is also a member of, or affiliated to, many...
, Germany
Germany and weapons of mass destruction
Though Germany is one of the most technologically advanced countries in the world, since World War II it has generally refrained from using this technology to outfit its own armed forces with weapons of mass destruction , although it participates in the NATO nuclear weapons sharing arrangements and...
, Italy
Italy
Italy , officially the Italian Republic languages]] under the European Charter for Regional or Minority Languages. In each of these, Italy's official name is as follows:;;;;;;;;), is a unitary parliamentary republic in South-Central Europe. To the north it borders France, Switzerland, Austria and...
, the Netherlands
Netherlands and weapons of mass destruction
Although the Netherlands does not have weapons of mass destruction made by itself, the country participates in the NATO nuclear weapons sharing arrangements and trains for delivering U.S...
and Turkey
Turkey
Turkey , known officially as the Republic of Turkey , is a Eurasian country located in Western Asia and in East Thrace in Southeastern Europe...
are still hosting U.S. nuclear weapons as part of NATO's nuclear sharing policy. Canada
Canada and weapons of mass destruction
Canada does not currently possess any weapons of mass destruction and has signed treaties repudiating possession of them. Canada ratified the Geneva Protocol in 1930 and the Nuclear Non-proliferation Treaty in 1970.- Introduction :...
hosted weapons until 1984, and Greece
Greece
Greece , officially the Hellenic Republic , and historically Hellas or the Republic of Greece in English, is a country in southeastern Europe....
until 2001. The United Kingdom
Nuclear weapons and the United Kingdom
The United Kingdom was the third country to test an independently developed nuclear weapon, in October 1952. It is one of the five "Nuclear Weapons States" under the Nuclear Non-Proliferation Treaty, which the UK ratified in 1968...
also received U.S. tactical nuclear weapons such as nuclear artillery
Nuclear artillery
Nuclear artillery is a subset of limited-yield tactical nuclear weapons, in particular those weapons that are launched from the ground at battlefield targets...
and Lance missiles until 1992, despite the UK being a nuclear weapons state in its own right; these were mainly deployed in Germany
Germany
Germany , officially the Federal Republic of Germany , is a federal parliamentary republic in Europe. The country consists of 16 states while the capital and largest city is Berlin. Germany covers an area of 357,021 km2 and has a largely temperate seasonal climate...
. 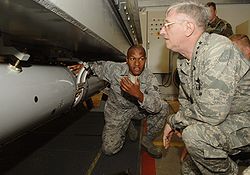 , 180 tactical B61 nuclear bomb
B61 nuclear bomb
The B61 nuclear bomb is the primary thermonuclear weapon in the U.S. Enduring Stockpile following the end of the Cold War. It is an intermediate yield strategic and tactical nuclear weapon featuring a two-stage radiation implosion design....
s of the 480 U.S. nuclear weapons believed to be deployed in Europe
Europe
Europe is, by convention, one of the world's seven continents. Comprising the westernmost peninsula of Eurasia, Europe is generally 'divided' from Asia to its east by the watershed divides of the Ural and Caucasus Mountains, the Ural River, the Caspian and Black Seas, and the waterways connecting...
fall under the nuclear sharing arrangement. The weapons are stored within a vault in Hardened Aircraft Shelter
Hardened Aircraft Shelter
Hardened Aircraft Shelters , or Protective Aircraft Shelter , are a reinforced structure to house and protect military aircraft from enemy attack...
s, using the USAF WS3 Weapon Storage and Security System. The delivery warplanes used are F-16s and Panavia Tornado
Panavia Tornado
The Panavia Tornado is a family of twin-engine, variable-sweep wing combat aircraft, which was jointly developed and manufactured by the United Kingdom, West Germany and Italy...
s.

Historically, the shared nuclear weapon delivery systems were not restricted to bombs. Greece used Nike-Hercules Missile
Nike-Hercules Missile
The MIM-14 Nike-Hercules , was a solid fuel propelled two-stage surface-to-air missile, used by US and NATO armed forces for high- and medium-altitude air defense...
s as well as A-7 Corsair II
A-7 Corsair II
The Ling-Temco-Vought A-7 Corsair II is a carrier-based subsonic light attack aircraft introduced to replace the United States Navy's Douglas A-4 Skyhawk, initially entering service during the Vietnam War...
attack aircraft. Canada had Bomarc nuclear-armed anti-aircraft missiles, Honest John surface-to-surface missiles and the AIR-2 Genie
AIR-2 Genie
The Douglas AIR-2 Genie was an unguided air-to-air rocket with a 1.5kt W25 nuclear warhead. It was deployed by the United States Air Force and Canada during the Cold War...
nuclear-armed air-to-air rocket, as well as tactical nuclear bombs for the CF-104 fighter.

After the Soviet Union
Soviet Union
The Soviet Union , officially the Union of Soviet Socialist Republics , was a constitutionally socialist state that existed in Eurasia between 1922 and 1991....
collapsed, the nuclear weapon types shared within NATO were reduced to tactical nuclear bombs deployed by Dual-Capable Aircraft (DCA).

The only German nuclear base is located in Büchel
Büchel
Büchel is an Ortsgemeinde – a municipality belonging to a Verbandsgemeinde, a kind of collective municipality – in the Cochem-Zell district in Rhineland-Palatinate, Germany...
, near the border to Luxembourg. The base has 11 Protective Aircraft Shelters (PAS) equipped with WS3 Vaults for storage of nuclear weapons (maximum capacity of 44). There are 20 B61 nuclear bombs stored on the base for delivery by German PA-200 Tornado IDS bombers of the JaBoG 33 squadron. By 2015 Germany's Tornado IDS aircraft are due to be retired, and it is unclear what nuclear sharing role, if any, Germany will then retain.

The US insists that its forces control the weapons, and that no transfer of the nuclear bombs or control over them is intended "unless and until a decision were made to go to war, at which the NPT
Nuclear Non-Proliferation Treaty
The Treaty on the Non-Proliferation of Nuclear Weapons, commonly known as the Non-Proliferation Treaty or NPT, is a landmark international treaty whose objective is to prevent the spread of nuclear weapons and weapons technology, to promote cooperation in the peaceful uses of nuclear energy and to...
treaty would no longer be controlling", so there is no breach of the NPT. However, the pilots and other staff of the "non-nuclear" NATO countries practice handling and delivering the US nuclear bombs, and non-US warplanes have been adapted to deliver US nuclear bombs which involved the transfer of some technical nuclear weapons information. Even if the US argument is considered legally correct, some argue such peacetime operations appear to contravene both the objective and the spirit of the NPT. Essentially, all preparations for waging nuclear war have already been made by supposedly non-nuclear weapon states.

At the time the NPT was being negotiated, the NATO nuclear sharing agreements were secret. These agreements were disclosed to some of the states, including the Soviet Union
Soviet Union
The Soviet Union , officially the Union of Soviet Socialist Republics , was a constitutionally socialist state that existed in Eurasia between 1922 and 1991....
, negotiating the treaty along with the NATO arguments for not treating them as proliferation. Most of the states that signed the NPT in 1968 would not have known about these agreements and interpretations at that time.