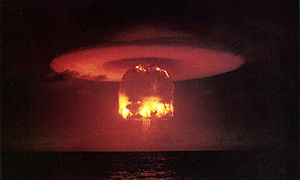 Nuclear holocaust refers to the possibility of the near complete annihilation of human civilization
Civilization
Civilization is a sometimes controversial term that has been used in several related ways. Primarily, the term has been used to refer to the material and instrumental side of human cultures that are complex in terms of technology, science, and division of labor. Such civilizations are generally...
by nuclear warfare
Nuclear warfare
Nuclear warfare, or atomic warfare, is a military conflict or political strategy in which nuclear weaponry is detonated on an opponent. Compared to conventional warfare, nuclear warfare can be vastly more destructive in range and extent of damage...
. Under such a scenario, all or most of the Earth is made uninhabitable by nuclear weapon
Nuclear weapon
A nuclear weapon is an explosive device that derives its destructive force from nuclear reactions, either fission or a combination of fission and fusion. Both reactions release vast quantities of energy from relatively small amounts of matter. The first fission bomb test released the same amount...
s in future world war
World war
A world war is a war affecting the majority of the world's most powerful and populous nations. World wars span multiple countries on multiple continents, with battles fought in multiple theaters....
s.

A common definition of the word "holocaust": "great destruction resulting in the extensive loss of life, especially by fire." The word is derived from the Greek
Greek language
Greek is an independent branch of the Indo-European family of languages. Native to the southern Balkans, it has the longest documented history of any Indo-European language, spanning 34 centuries of written records. Its writing system has been the Greek alphabet for the majority of its history;...
term "holokaustos" meaning "completely burnt." Possibly the first printed use of the word "holocaust" to describe an imagined nuclear destruction is Reginald Glossop's 1926: "Moscow ... beneath them ... a crash like a crack of Doom! The echoes of this Holocaust rumbled and rolled ... a distinct smell of sulphur ... atomic destruction." In the 1960s the principal referent of the unmodified "holocaust" was nuclear destruction. Since the mid 1970s the capitalized term "Holocaust" has been closely associated with the Nazi mass slaughter of Jews
Jews
The Jews , also known as the Jewish people, are a nation and ethnoreligious group originating in the Israelites or Hebrews of the Ancient Near East. The Jewish ethnicity, nationality, and religion are strongly interrelated, as Judaism is the traditional faith of the Jewish nation...
(see The Holocaust
The Holocaust
The Holocaust , also known as the Shoah , was the genocide of approximately six million European Jews and millions of others during World War II, a programme of systematic state-sponsored murder by Nazi...
) and "holocaust" in its nuclear destruction sense is almost always preceded by "atomic" or "nuclear".

Nuclear physicists and authors
Speculative fiction
Speculative fiction is an umbrella term encompassing the more fantastical fiction genres, specifically science fiction, fantasy, horror, supernatural fiction, superhero fiction, utopian and dystopian fiction, apocalyptic and post-apocalyptic fiction, and alternate history in literature as well as...
have speculated that nuclear holocaust could result in an end to human life, or at least to modern civilization on Earth due to the immediate effects of nuclear fallout
Nuclear fallout
Fallout is the residual radioactive material propelled into the upper atmosphere following a nuclear blast, so called because it "falls out" of the sky after the explosion and shock wave have passed. It commonly refers to the radioactive dust and ash created when a nuclear weapon explodes...
, the loss of much modern technology due to electromagnetic pulse
Electromagnetic pulse
An electromagnetic pulse is a burst of electromagnetic radiation. The abrupt pulse of electromagnetic radiation usually results from certain types of high energy explosions, especially a nuclear explosion, or from a suddenly fluctuating magnetic field...
s, or nuclear winter
Nuclear winter
Nuclear winter is a predicted climatic effect of nuclear war. It has been theorized that severely cold weather and reduced sunlight for a period of months or even years could be caused by detonating large numbers of nuclear weapons, especially over flammable targets such as cities, where large...
and resulting extinction
Extinction
In biology and ecology, extinction is the end of an organism or of a group of organisms , normally a species. The moment of extinction is generally considered to be the death of the last individual of the species, although the capacity to breed and recover may have been lost before this point...
s.

The theme is widely used in dystopia
Dystopia
A dystopia is the idea of a society in a repressive and controlled state, often under the guise of being utopian, as characterized in books like Brave New World and Nineteen Eighty-Four...
n fiction books, films, and video games.

One of the first depictions of a nuclear holocaust is included in Olaf Stapledon
Olaf Stapledon
William Olaf Stapledon was a British philosopher and author of several influential works of science fiction.-Life:...
's celebrated Last and First Men
Last and First Men
Last and First Men: A Story of the Near and Far Future is a "future history" science fiction novel written in 1930 by the British author Olaf Stapledon. A work of unprecedented scale in the genre, it describes the history of humanity from the present onwards across two billion years and eighteen...
(1930). Unlike the post-1945 treatment of the subject, where the disaster is almost invariably the outcome of a war between states, Stapeldon depicts this holocaust as the result of class war
Class conflict
Class conflict is the tension or antagonism which exists in society due to competing socioeconomic interests between people of different classes....
between an arrogant ruling class and downtrodden miners in a future civilization. Abuse of the newly-discovered Atomic power source leads to what would now be called a chain reaction
Chain reaction
A chain reaction is a sequence of reactions where a reactive product or by-product causes additional reactions to take place. In a chain reaction, positive feedback leads to a self-amplifying chain of events....
engulfing the entire world, so that "of the two hundred million members of the human race, all were burnt or roasted or suffocated - all but thirty-five, who happened to be in the neighborhood of the North Pole" (and from whom humanity is eventually regenerated for many more millions of years of existence). The book "By the Waters of Babylon
By the Waters of Babylon
"By the Waters of Babylon" is a post-apocalyptic short story by Stephen Vincent Benét first published July 31, 1937, in The Saturday Evening Post as "The Place of the Gods"...
", written in 1937, also is set in a post-apocalyptic world where a sort of nuclear or atomic disaster is alluded to.

Throughout the Cold War
Cold War
The Cold War was the continuing state from roughly 1946 to 1991 of political conflict, military tension, proxy wars, and economic competition between the Communist World—primarily the Soviet Union and its satellite states and allies—and the powers of the Western world, primarily the United States...
, nuclear holocaust was something many people in the developed world were afraid of because of a perceived likelihood of occurrence. The topic became somewhat less common after the collapse of the Soviet Union
Soviet Union
The Soviet Union , officially the Union of Soviet Socialist Republics , was a constitutionally socialist state that existed in Eurasia between 1922 and 1991....
, however, as many of the works created during the Cold War were primarily just commentary on that conflict. Asian work that deals with the theme and western work influenced by it often borrow much imagery from American
United States
The United States of America is a federal constitutional republic comprising fifty states and a federal district...
atomic bombings
Atomic bombings of Hiroshima and Nagasaki
During the final stages of World War II in 1945, the United States conducted two atomic bombings against the cities of Hiroshima and Nagasaki in Japan, the first on August 6, 1945, and the second on August 9, 1945. These two events are the only use of nuclear weapons in war to date.For six months...
of the Japanese cities of Nagasaki
Nagasaki
is the capital and the largest city of Nagasaki Prefecture on the island of Kyushu in Japan. Nagasaki was founded by the Portuguese in the second half of the 16th century on the site of a small fishing village, formerly part of Nishisonogi District...
and Hiroshima
Hiroshima
is the capital of Hiroshima Prefecture, and the largest city in the Chūgoku region of western Honshu, the largest island of Japan. It became best known as the first city in history to be destroyed by a nuclear weapon when the United States Army Air Forces dropped an atomic bomb on it at 8:15 A.M...
during World War II in 1945. To this date, those bombings and the failure
Chernobyl disaster
The Chernobyl disaster was a nuclear accident that occurred on 26 April 1986 at the Chernobyl Nuclear Power Plant in Ukraine , which was under the direct jurisdiction of the central authorities in Moscow...
of the Chernobyl Nuclear Power Plant
Chernobyl Nuclear Power Plant
The Chernobyl Nuclear Power Plant or Chornobyl Nuclear Power Plant is a decommissioned nuclear power station near the city of Pripyat, Ukraine, northwest of the city of Chernobyl, from the Ukraine–Belarus border, and about north of Kiev. Reactor 4 was the site of the Chernobyl disaster in...
in 1986 remain the only nuclear disasters from which authors and screenwriters can draw real world experience with the aftermath of such instances.