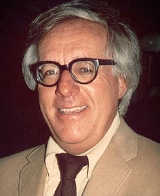 Overview
Ray Douglas Bradbury is an American fantasy
Fantasy
Fantasy is a genre of fiction that commonly uses magic and other supernatural phenomena as a primary element of plot, theme, or setting. Many works within the genre take place in imaginary worlds where magic is common...
, horror
Horror fiction
Horror fiction also Horror fantasy is a philosophy of literature, which is intended to, or has the capacity to frighten its readers, inducing feelings of horror and terror. It creates an eerie atmosphere. Horror can be either supernatural or non-supernatural...
, science fiction
Science fiction
Science fiction is a genre of fiction dealing with imaginary but more or less plausible content such as future settings, futuristic science and technology, space travel, aliens, and paranormal abilities...
, and mystery writer. Best known for his dystopia
Dystopia
A dystopia is the idea of a society in a repressive and controlled state, often under the guise of being utopian, as characterized in books like Brave New World and Nineteen Eighty-Four...
n novel Fahrenheit 451
Fahrenheit 451
Fahrenheit 451 is a 1953 dystopian novel by Ray Bradbury. The novel presents a future American society where reading is outlawed and firemen start fires to burn books...
(1953) and for the science fiction stories gathered together as The Martian Chronicles
The Martian Chronicles
The Martian Chronicles is a 1950 science fiction short story collection by Ray Bradbury that chronicles the colonization of Mars by humans fleeing from a troubled and eventually atomically devastated Earth, and the conflict between aboriginal Martians and the new colonists...
(1950) and The Illustrated Man
The Illustrated Man
The Illustrated Man is a 1951 book of eighteen science fiction short stories by Ray Bradbury that explores the nature of mankind. While none of the stories has a plot or character connection with the next, a recurring theme is the conflict of the cold mechanics of technology and the psychology of...
(1951), Bradbury is one of the most celebrated among 20th and 21st century American writers of speculative fiction
Speculative fiction
Speculative fiction is an umbrella term encompassing the more fantastical fiction genres, specifically science fiction, fantasy, horror, supernatural fiction, superhero fiction, utopian and dystopian fiction, apocalyptic and post-apocalyptic fiction, and alternate history in literature as well as...
. Many of Bradbury's works have been adapted into television shows or films.
Bradbury was born in Waukegan, Illinois
Waukegan, Illinois
Waukegan is a city and county seat of Lake County, Illinois. As of the 2000 census, the city had a total population of 87,901. The 2010 population was 89,078. It is the ninth-largest city in Illinois by population...
to Esther Moberg Bradbury, a Swedish immigrant
Swedish American
Swedish Americans are Americans of Swedish descent, especially the descendants of about 1.2 million immigrants from Sweden during 1885-1915. Most were Lutherans who affiliated with the Evangelical Lutheran Church in America ; some were Methodists...
, and Leonard Spaulding Bradbury, a power and telephone lineman.

Is there a definitive of all the Ray Barbury stories adapted by EC Comics ? Thanks

Can anyone tell me appart from the three part 1980 martian chronicals series was there another earlier series done for tv?? cheers.
More

What are some of Ray Bradbury's most important works?

Who were some of his early influences?

In touch! There's a slimy phrase. Touch, hell. Gripped! Pawed, rather. Mauled and massaged and pounded by FM voices.

I've done a prideful thing, a thing more sinful than she ever done to me. I took the bottom out of her life.

I wonder how many men, hiding their youngness, rise as I do, Saturday mornings, filled with the hope that Bugs Bunny, Yosemite Sam and Daffy Duck will be there waiting as our one true always and forever salvation?

"My stories run up and bite me in the leg— I respond by writing down everything that goes on during the bite. When I finish, the idea lets go and runs off."

Introduction to The Stories of Ray Bradbury

Go to the edge of the cliff and jump off. Build your wings on the way down.

My job is to help you fall in love.

Recreate the world in your own image and make it better for your having been here.

We were put here as witnesses to the miracle of life. We see the stars, and we want them. We are beholden to give back to the universe.... If we make landfall on another star system, we become immortal.