Encyclopedia
Nova Kakhovka is a city
City
A city is a relatively large and permanent settlement. Although there is no agreement on how a city is distinguished from a town within general English language meanings, many cities have a particular administrative, legal, or historical status based on local law.For example, in the U.S...
in the Kherson Oblast
Kherson Oblast
Kherson Oblast is an oblast in southern Ukraine, just north of Crimea. Its administrative center is Kherson. The area of the region is 29000 km², its population is 1.12 million.Important cities in the oblast include:...
of southern Ukraine
Ukraine
Ukraine is a country in Eastern Europe. It has an area of 603,628 km², making it the second largest contiguous country on the European continent, after Russia...
, recognized as the Monument of Architecture, and was part of the Great Construction Projects of Communism
Great construction projects of communism
Great construction projects of communism was a term used for a series of ambitious construction projects undertaken in 1950s on the command of Joseph Stalin....
.

It is designated as a separate raion
Raion
A raion is a type of administrative unit of several post-Soviet countries. The term, which is from French rayon 'honeycomb, department,' describes both a type of a subnational entity and a division of a city, and is commonly translated in English as "district"...
(district) within the oblast, and is an important river port on Dnieper River
Dnieper River
The Dnieper River is one of the major rivers of Europe that flows from Russia, through Belarus and Ukraine, to the Black Sea.The total length is and has a drainage basin of .The river is noted for its dams and hydroelectric stations...
and the Kakhovka Reservoir
Kakhovka Reservoir
The Kakhovka Reservoir is a water reservoir located on the Dnieper River. It covers a total surface area of 2,155 square kilometres in the territories of the Kherson, Zaporizhia, and the Dnipropetrovsk Oblasts of Ukraine...
. It is also the site of the Tavria Games, ' onMouseout='HidePop("38076")' href="/topics/Romanization_of_Ukrainian">translit.
Romanization of Ukrainian
The romanization or Latinization of Ukrainian is the representation of the Ukrainian language using Latin letters. Ukrainian is natively written in its own Ukrainian alphabet, a variation of Cyrillic....
Tavriys'ki ihry), the most popular annual international music festival
Festival
A festival or gala is an event, usually and ordinarily staged by a local community, which centers on and celebrates some unique aspect of that community and the Festival....
in the region. 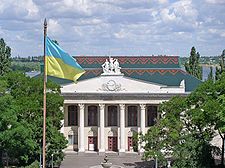 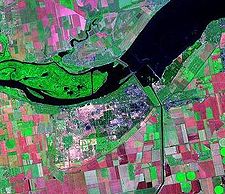 The city is sometimes referred to as an oasis
Oasis
In geography, an oasis or cienega is an isolated area of vegetation in a desert, typically surrounding a spring or similar water source...
, because it was built on an area where sand was plentiful. During the construction of the city, the parks and sod were built and lain on the sandy ground. Also, the architectural plans were developed to build streets and squares in the way they would harmonize perfectly with the shoreline of the reservoir.

The economic activities in Nova Kakhovka are engineering (electrotechnology) and power production. Near the city the large North Crimean Canal begins, via which the southwest of the Kherson Oblast and the entire northern part of the Crimea
Crimea
Crimea , or the Autonomous Republic of Crimea , is a sub-national unit, an autonomous republic, of Ukraine. It is located on the northern coast of the Black Sea, occupying a peninsula of the same name...
are supplied with water coming from the Dnieper River. 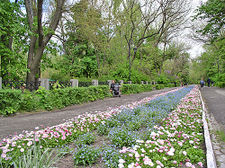 The city is located between Kherson
Kherson
Kherson is a city in southern Ukraine. It is the administrative center of the Kherson Oblast , and is designated as its own separate raion within the oblast. Kherson is an important port on the Black Sea and Dnieper River, and the home of a major ship-building industry...
in the west and Melitopol
Melitopol
Melitopol is a city in the Zaporizhia Oblast of the southeastern Ukraine. It is situated on the Molochna River that flows through the eastern edge of the city and into the Molochnyi Liman, which eventually joins the Sea of Azov....
in the east on the European route E58
European route E58
European route E 58 is a road part of the International E-road network. It begins in Vienna, Austria and ends in Rostov-na-Donu, Russia....
, which runs from Odessa
Odessa
Odessa or Odesa is the administrative center of the Odessa Oblast located in southern Ukraine. The city is a major seaport located on the northwest shore of the Black Sea and the fourth largest city in Ukraine with a population of 1,029,000 .The predecessor of Odessa, a small Tatar settlement,...
to Rostov-on-Don
Rostov-on-Don
-History:The mouth of the Don River has been of great commercial and cultural importance since the ancient times. It was the site of the Greek colony Tanais, of the Genoese fort Tana, and of the Turkish fortress Azak...
near the city. The city contains a non-electrified, one lane railroad, an airport, a water route to the Black Sea
Black Sea
The Black Sea is bounded by Europe, Anatolia and the Caucasus and is ultimately connected to the Atlantic Ocean via the Mediterranean and the Aegean seas and various straits. The Bosphorus strait connects it to the Sea of Marmara, and the strait of the Dardanelles connects that sea to the Aegean...
, and a port which is located on the southwest part of the Khakovka Reservoir.

The Nova Kakhovka city has a small city and an urban type village within it, as well as eight small villages in the outlying area.