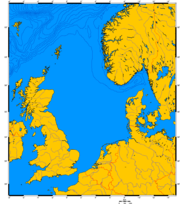 The Norwegian trench or Norwegian channel is an elongated depression in the sea floor (but not a true oceanic trench
Oceanic trench
The oceanic trenches are hemispheric-scale long but narrow topographic depressions of the sea floor. They are also the deepest parts of the ocean floor....
) off the southern coast of Norway
Norway
Norway , officially the Kingdom of Norway, is a Nordic unitary constitutional monarchy whose territory comprises the western portion of the Scandinavian Peninsula, Jan Mayen, and the Arctic archipelago of Svalbard and Bouvet Island. Norway has a total area of and a population of about 4.9 million...
.
It reaches from the Stad
Stad (peninsula)
Stad or Stadlandet is a peninsula in the municipality of Selje in Sogn og Fjordane county, Norway.The name is sometimes also written as Stadt, Statt or Stadlandet–not to be confused with the similar German word Stadt. The d in Stad is pronounced in Norwegian as a t. The Stad peninsula has a...
peninsula in Sogn og Fjordane
Sogn og Fjordane
is a county in Norway, bordering Møre og Romsdal, Oppland, Buskerud, and Hordaland. The county administration is in the town of Hermansverk in Leikanger municipality while the largest town is Førde....
in the northwest to the Oslofjord
Oslofjord
The Oslofjord is a bay in the south-east of Norway, stretching from an imaginary line between the Torbjørnskjær and Færder lighthouses and down to Langesund in the south to Oslo in the north....
in the southeast. The trench is between 50 and 95 kilometers wide and up to 700 meters deep. Off the Rogaland
Rogaland
is a county in Western Norway, bordering Hordaland, Telemark, Aust-Agder and Vest-Agder. It is the center of the Norwegian petroleum industry, and as a result of this, Rogaland has the lowest unemployment rate of any county in Norway, 1.1%...
coast it is 250 - 300 meters deep, and its deepest point is off Arendal
Arendal
is a town and municipality in the county of Aust-Agder, Norway. Arendal belongs to the traditional region of Sørlandet.The town of Arendal is the administrative center the municipality and also of Aust-Agder county...
where it reaches 700 meters deep – an abyss
Abyssal zone
The abyssal zone is the abyssopelagic layer or pelagic zone that contains the very deep benthic communities near the bottom of oceans. "Abyss" derives from the Greek word ἄβυσσος, meaning bottomless. At depths of 4,000 to 6,000 metres , this zone remains in perpetual darkness and never receives...
compared to the average depth of the North Sea
North Sea
In the southwest, beyond the Straits of Dover, the North Sea becomes the English Channel connecting to the Atlantic Ocean. In the east, it connects to the Baltic Sea via the Skagerrak and Kattegat, narrow straits that separate Denmark from Norway and Sweden respectively...
, which is about 100 meters.

It was formed during the last 1.1 Ma by the effects of erosion associated with repeated ice stream
Ice stream
An ice stream is a region of an ice sheet that moves significantly faster than the surrounding ice. Ice streams are a type of glacier. They are significant features of the Antarctic where they account for 10% of the volume of the ice...
activity The trench is not a subduction
Subduction
In geology, subduction is the process that takes place at convergent boundaries by which one tectonic plate moves under another tectonic plate, sinking into the Earth's mantle, as the plates converge. These 3D regions of mantle downwellings are known as "Subduction Zones"...
-related oceanic trench
Oceanic trench
The oceanic trenches are hemispheric-scale long but narrow topographic depressions of the sea floor. They are also the deepest parts of the ocean floor....
, where one tectonic plate is being forced under another. The Norwegian Trench was created by fluvial
Fluvial
Fluvial is used in geography and Earth science to refer to the processes associated with rivers and streams and the deposits and landforms created by them...
erosion
Erosion
Erosion is when materials are removed from the surface and changed into something else. It only works by hydraulic actions and transport of solids in the natural environment, and leads to the deposition of these materials elsewhere...
processes during the later Tertiary
Tertiary
The Tertiary is a deprecated term for a geologic period 65 million to 2.6 million years ago. The Tertiary covered the time span between the superseded Secondary period and the Quaternary...
age. Pleistocene
Pleistocene
The Pleistocene is the epoch from 2,588,000 to 11,700 years BP that spans the world's recent period of repeated glaciations. The name pleistocene is derived from the Greek and ....
glaciers and ice-sheets further deepened the trench. During the main glaciations, the Skagerrak
Skagerrak
The Skagerrak is a strait running between Norway and the southwest coast of Sweden and the Jutland peninsula of Denmark, connecting the North Sea and the Kattegat sea area, which leads to the Baltic Sea.-Name:...
Trough was the meeting point for ice from southeastern Norway, southern Sweden and parts of the Baltic causing a relatively fast-moving ice stream that passed south of the Norwegian coast and then turned north, eventually reaching deepwater
at about 62°N. The material carried by the ice stream was then deposited in the North Sea fan. Glacial erratics such as flint
Flint
Flint is a hard, sedimentary cryptocrystalline form of the mineral quartz, categorized as a variety of chert. It occurs chiefly as nodules and masses in sedimentary rocks, such as chalks and limestones. Inside the nodule, flint is usually dark grey, black, green, white, or brown in colour, and...
and rhomb porphyry, thought to originate from the Skagerrak and Oslo areas respectively , and deformed glacial till
Till
thumb|right|Closeup of glacial till. Note that the larger grains in the till are completely surrounded by the matrix of finer material , and this characteristic, known as matrix support, is diagnostic of till....
s found on the coast of Jæren
Jæren
Jæren is a traditional district in the county of Rogaland. The others are Dalane, Ryfylke and Haugalandet.Jæren is the largest flat lowland area in Norway, stretching from the municipality of Randaberg in the north to Hå in the south. The coast is flat compared to the rest of the Norwegian coast,...
provide the main onshore evidence for the Norwegian Channel Ice Stream.

The Norwegian current
Norwegian Current
The Norwegian Current is a water current that flows north-easterly along the Atlantic coast of Norway at depths of between 50 and 100 meters...
generally flows northeasterly along the Norwegian trench. The depth of the trench, along with density differences between Norwegian current water and the adjacent Atlantic Water, also result in large scale eddies. The Norwegian trench region in the Skagerrak
Skagerrak
The Skagerrak is a strait running between Norway and the southwest coast of Sweden and the Jutland peninsula of Denmark, connecting the North Sea and the Kattegat sea area, which leads to the Baltic Sea.-Name:...
is a biologically productive zone, as upwelling of North Atlantic water in the Skagerrak provides an input of nutrients.