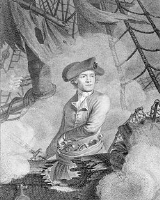 Overview
John Paul Jones was a Scottish sailor and the United States'
United States
The United States of America is a federal constitutional republic comprising fifty states and a federal district...
first well-known naval fighter in the American Revolutionary War
American Revolutionary War
The American Revolutionary War , the American War of Independence, or simply the Revolutionary War, began as a war between the Kingdom of Great Britain and thirteen British colonies in North America, and ended in a global war between several European great powers.The war was the result of the...
. Although he made enemies among America's political elites, his actions in British waters during the Revolution earned him an international reputation which persists to this day. He later served in the Imperial Russian Navy
Imperial Russian Navy
The Imperial Russian Navy refers to the Tsarist fleets prior to the February Revolution.-First Romanovs:Under Tsar Mikhail Feodorovich, construction of the first three-masted ship, actually built within Russia, was completed in 1636. It was built in Balakhna by Danish shipbuilders from Holstein...
.

During his engagement with HMS Serapis
HMS Serapis (1779)
HMS Serapis was a Royal Navy two-decked, Roebuck-class fifth rate. Daniel Brent built her at Greenland South Dockyard, Rotherhithe and launched her in 1779. She was armed with 44 guns . Serapis was named after the god Serapis in Greek and Egyptian mythology...
, Jones uttered, according to the later recollection of his first lieutenant, the legendary reply to a taunt about surrender from the British captain: "I have not yet begun to fight!"
John Paul (he added "Jones" later) was born on the estate of Arbigland
Arbigland
Arbigland Estate is an estate in Dumfries and Galloway in Scotland. Arbigland lies on the Solway Firth coast to the south east of Kirkbean.The classically-styled Arbigland House was built in 1755 by improving laird and gentleman architect William Craik and a small dower house called The House on...
near Kirkbean
Kirkbean
Kirkbean is a small village and civil parish near the Solway Firth in Dumfries and Galloway, Scotland.Arbigland, an estate in Kirkbean parish, was the birthplace of American naval commander John Paul Jones....
in the Stewartry of Kirkcudbright
Kirkcudbrightshire
The Stewartry of Kirkcudbright or Kirkcudbrightshire was a county of south-western Scotland. It was also known as East Galloway, forming the larger Galloway region with Wigtownshire....
on the southwest coast of Scotland
Scotland
Scotland is a country that is part of the United Kingdom. Occupying the northern third of the island of Great Britain, it shares a border with England to the south and is bounded by the North Sea to the east, the Atlantic Ocean to the north and west, and the North Channel and Irish Sea to the...
.

I wish to have no connection with any ship that does not sail fast; for I intend to go in harm's way.

Where men of fine feeling are concerned there is seldom misunderstanding.