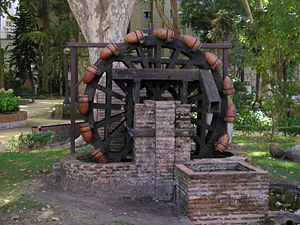 A noria is a machine for lifting water into a small aqueduct
Aqueduct
An aqueduct is a water supply or navigable channel constructed to convey water. In modern engineering, the term is used for any system of pipes, ditches, canals, tunnels, and other structures used for this purpose....
, either for the purpose of irrigation
Irrigation
Irrigation may be defined as the science of artificial application of water to the land or soil. It is used to assist in the growing of agricultural crops, maintenance of landscapes, and revegetation of disturbed soils in dry areas and during periods of inadequate rainfall...
or, in at least one known instance, to feed seawater into a saltern
Saltern
Saltern is a word with a number of differing meanings. In English archaeology, a saltern is an area used for salt making, especially in the East Anglian fenlands....
.

There are three types of noria. The most common examples consist of a vertical wheel which is slung with a chain of buckets. The buckets hang down into a well which may be up to 8 m (26 ft) deep. The most primitive norias of this type are driven by donkeys, mules, or oxen. The animal turns another wheel, which is engaged with the noria and so causes it to turn. This causes the buckets to circulate.

A second type of noria uses the same system, of a necklace of clay or wooden buckets, but it is driven by the wind. The wind driven norias in the vicinity of Cartagena, Spain
Cartagena, Spain
Cartagena is a Spanish city and a major naval station located in the Region of Murcia, by the Mediterranean coast, south-eastern Spain. As of January 2011, it has a population of 218,210 inhabitants being the Region’s second largest municipality and the country’s 6th non-Province capital...
, are virtually identical in appearance with the local grinding mills.

The third type of noria uses the energy derived from the flow of a river. It consists of a large, very narrow undershot waterwheel whose rim is made up of a series of containers which lift water from the river to a very small aqueduct at the top of the wheel.

Unlike the water wheels found in mills, a noria does not provide mechanical power to any other process. Its concept is similar to the modern hydraulic ram
Hydraulic ram
A hydraulic ram, or hydram, is a cyclic water pump powered by hydropower. It functions as a hydraulic transformer that takes in water at one "hydraulic head" and flow-rate, and outputs water at a higher hydraulic-head and lower flow-rate...
, which also uses the power of flowing water to pump some of the water out of the river.

A few norias were hybrids, consisting of an animal-driven waterwheel.

A noria can raise water to somewhat less than its full height. The largest noria
Norias of Hama
The Norias of Hama are a number of norias along the Orontes River in the city of Hama, Syria. Only seventeen of the original norias remain. They are mostly unused now and serve an aesthetic purpose...
in the world, with a diameter of about 20 meters, is located in the Syria
Syria
Syria , officially the Syrian Arab Republic , is a country in Western Asia, bordering Lebanon and the Mediterranean Sea to the West, Turkey to the north, Iraq to the east, Jordan to the south, and Israel to the southwest....
n city of Hama
Hama
Hama is a city on the banks of the Orontes River in west-central Syria north of Damascus. It is the provincial capital of the Hama Governorate. Hama is the fourth-largest city in Syria—behind Aleppo, Damascus, and Homs—with a population of 696,863...
.

It performs a similar function to chain pumps (including the saqiya), and other pump
Pump
A pump is a device used to move fluids, such as liquids, gases or slurries.A pump displaces a volume by physical or mechanical action. Pumps fall into three major groups: direct lift, displacement, and gravity pumps...
s, that of moving water from a lower elevation to a higher elevation, but these are generally powered by other means, not by a waterwheel.

The undershot and overshot waterwheel, both animal and water-driven, and with either a compartmented body (Latin
Latin
Latin is an Italic language originally spoken in Latium and Ancient Rome. It, along with most European languages, is a descendant of the ancient Proto-Indo-European language. Although it is considered a dead language, a number of scholars and members of the Christian clergy speak it fluently, and...
tympanum) or a compartmented rim were invented by Greek
Ancient Greece
Ancient Greece is a civilization belonging to a period of Greek history that lasted from the Archaic period of the 8th to 6th centuries BC to the end of antiquity. Immediately following this period was the beginning of the Early Middle Ages and the Byzantine era. Included in Ancient Greece is the...
engineers between the 3rd and 2nd century BC. Around 300 AD, the Romans
Roman Empire
The Roman Empire was the post-Republican period of the ancient Roman civilization, characterised by an autocratic form of government and large territorial holdings in Europe and around the Mediterranean....
replaced the wooden compartments with separate, attached ceramic pots that were tied to the outside of an open-framed wheel, thereby creating the noria.

Norias were adopted during the Arab Agricultural Revolution and were in large-scale use in the medieval Islamic world
Islamic Golden Age
During the Islamic Golden Age philosophers, scientists and engineers of the Islamic world contributed enormously to technology and culture, both by preserving earlier traditions and by adding their own inventions and innovations...
, where Muslim inventors and engineers made a number of improvements to the noria. For example, the flywheel
Flywheel
A flywheel is a rotating mechanical device that is used to store rotational energy. Flywheels have a significant moment of inertia, and thus resist changes in rotational speed. The amount of energy stored in a flywheel is proportional to the square of its rotational speed...
mechanism used to smooth out the delivery of power from a driving device to a driven machine, was invented by Ibn Bassal (fl.
Floruit
Floruit , abbreviated fl. , is a Latin verb meaning "flourished", denoting the period of time during which something was active...
1038-1075) of al-Andalus
Al-Andalus
Al-Andalus was the Arabic name given to a nation and territorial region also commonly referred to as Moorish Iberia. The name describes parts of the Iberian Peninsula and Septimania governed by Muslims , at various times in the period between 711 and 1492, although the territorial boundaries...
, who pioneered the use of the flywheel in the noria and chain pump (Sakia
Sakia
A sakia , tympanum or tablia is a water wheel, somewhat similar to a noria, and used primarily in Egypt. It is a large hollow wheel, normally made of galvanized sheet steel, with scoops or buckets at the periphery...
or saqiya). In 1206, Al-Jazari
Al-Jazari
Abū al-'Iz Ibn Ismā'īl ibn al-Razāz al-Jazarī was a Muslim polymath: a scholar, inventor, mechanical engineer, craftsman, artist, mathematician and astronomer from Al-Jazira, Mesopotamia, who lived during the Islamic Golden Age...
introduced the use of the crankshaft
Crankshaft
The crankshaft, sometimes casually abbreviated to crank, is the part of an engine which translates reciprocating linear piston motion into rotation...
in a noria and saqiya, and the concept of minimizing intermittent working
Intermittency
In dynamical systems, intermittency is the irregular alternation of phases of apparently periodic and chaotic dynamics , or different forms of chaotic dynamics ....
was implied for the purpose of maximising their efficiency.

Muslim engineers used norias to discharge water into aqueduct
Aqueduct
An aqueduct is a water supply or navigable channel constructed to convey water. In modern engineering, the term is used for any system of pipes, ditches, canals, tunnels, and other structures used for this purpose....
s which carried the water to towns and fields. Some of the norias used in the medieval Islamic world were as large as 20 meters in diameter, the norias at Hama being a surviving example still used in modern times (although currently only serving aesthetical purposes). It has 120 water collection compartments and could raise more than 95 litres of water per minute. Muhammad ibn Zakariya al-Razi's Kitab al-Hawi in the 10th century describes a noria in Iraq
Iraq
Iraq ; officially the Republic of Iraq is a country in Western Asia spanning most of the northwestern end of the Zagros mountain range, the eastern part of the Syrian Desert and the northern part of the Arabian Desert....
that could lift as much as 153,000 litres per hour, or 2550 litres per minute. This is comparable to the output of modern Norias in East Asia
East Asia
East Asia or Eastern Asia is a subregion of Asia that can be defined in either geographical or cultural terms...
which can lift up to 288,000 litres per hour, or 4800 litres per minute.

During the period of agricultural expansion in Song China
Song Dynasty
The Song Dynasty was a ruling dynasty in China between 960 and 1279; it succeeded the Five Dynasties and Ten Kingdoms Period, and was followed by the Yuan Dynasty. It was the first government in world history to issue banknotes or paper money, and the first Chinese government to establish a...
, the technology of norias was improved. For some centuries they had been used for moving water for drainage or irrigation purposes. The simplest design, such as the counterbalanced bucket or 'well-sweep' was found almost universally. A more complicated design, the 'square-pallet chain pump' was introduced several centuries before the growth in Song technology, but had not been used until then for farming. They became more common around the end of the first millennium AD.

The contribution of norias to agricultural growth during the Song was extolled by poets such as Li Ch'u-ch'uan (李处权) of the twelfth century. The Song government actively spread the technology, introducing pumping equipment and norias to those areas as yet unfamiliar with the techniques.