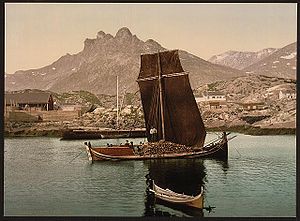 The Nordland boat is a type of fishing boat that has been used for centuries in northern counties of Nordland
Nordland
is a county in Norway in the North Norway region, bordering Troms in the north, Nord-Trøndelag in the south, Norrbottens län in Sweden to the east, Västerbottens län to the southeast, and the Atlantic Ocean to the west. The county was formerly known as Nordlandene amt. The county administration is...
, Troms
Troms
or Romsa is a county in North Norway, bordering Finnmark to the northeast and Nordland in the southwest. To the south is Norrbotten Län in Sweden and further southeast is a shorter border with Lapland Province in Finland. To the west is the Norwegian Sea...
and Finmark
Finmark
Finmark may refer to:* Finmark, Ontario, a community in the Thunder Bay District of Ontario* the Sápmi * a misspelling of Finnmark, a county in Norway....
of Norway
Norway
Norway , officially the Kingdom of Norway, is a Nordic unitary constitutional monarchy whose territory comprises the western portion of the Scandinavian Peninsula, Jan Mayen, and the Arctic archipelago of Svalbard and Bouvet Island. Norway has a total area of and a population of about 4.9 million...
and derives its name from Nordland county where it has a long history. It has dominated the Lofoten
Lofoten
Lofoten is an archipelago and a traditional district in the county of Nordland, Norway. Though lying within the Arctic Circle, the archipelago experiences one of the world's largest elevated temperature anomalies relative to its high latitude.-Etymology:...
and Vesterålen
Vesterålen
Vesterålen is a district and archipelago in Nordland, Norway, just north of Lofoten.-The name:The Norse forms of the name were Vestráll and Vestrálar . The first element is vestr n west, the last element is áll m ' sound, strait'...
islands fishing industry for centuries and is closely related to the old Viking
Viking
The term Viking is customarily used to refer to the Norse explorers, warriors, merchants, and pirates who raided, traded, explored and settled in wide areas of Europe, Asia and the North Atlantic islands from the late 8th to the mid-11th century.These Norsemen used their famed longships to...
longship
Longship
Longships were sea vessels made and used by the Vikings from the Nordic countries for trade, commerce, exploration, and warfare during the Viking Age. The longship’s design evolved over many years, beginning in the Stone Age with the invention of the umiak and continuing up to the 9th century with...
s. 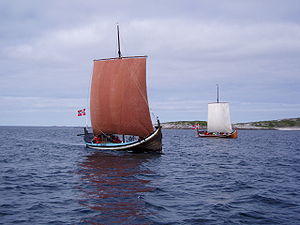 The Nordland boat has a clinker, or lapstrake hull
Hull (watercraft)
A hull is the watertight body of a ship or boat. Above the hull is the superstructure and/or deckhouse, where present. The line where the hull meets the water surface is called the waterline.The structure of the hull varies depending on the vessel type...
design and has its rudder on the sternpost
Sternpost
A sternpost is the upright structural member or post at the stern of a ship or a boat, to which are attached the transoms and the rearmost left corner part of the stern...
. Its length varies from the smallest of fourteen feet to well over forty and usually has a length-beam
Beam (nautical)
The beam of a ship is its width at the widest point. Generally speaking, the wider the beam of a ship , the more initial stability it has, at expense of reserve stability in the event of a capsize, where more energy is required to right the vessel from its inverted position...
ratio of 3-1 to 4-1. It has a high prow
Prow
thumb|right|295pxThe prow is the forward most part of a ship's bow that cuts through the water. The prow is the part of the bow above the waterline. The terms prow and bow are often used interchangeably to describe the most forward part of a ship and its surrounding parts...
, stern
Stern
The stern is the rear or aft-most part of a ship or boat, technically defined as the area built up over the sternpost, extending upwards from the counter rail to the taffrail. The stern lies opposite of the bow, the foremost part of a ship. Originally, the term only referred to the aft port section...
, shallow keel
Keel
In boats and ships, keel can refer to either of two parts: a structural element, or a hydrodynamic element. These parts overlap. As the laying down of the keel is the initial step in construction of a ship, in British and American shipbuilding traditions the construction is dated from this event...
, v-hull
V-hull (boat)
A V-hull, is the shape of a boat or ship in which the contours of the hull come in a straight line to the keel. V-hull designs are usually used in smaller boats and are useful in providing space for ballast inside the boat....
and has an inboard gunwale
Gunwale
The gunwale is a nautical term describing the top edge of the side of a boat.Wale is the same word as the skin injury, a wheal, which, too, forms a ridge. Originally the gunwale was the "Gun ridge" on a sailing warship. This represented the strengthening wale or structural band added to the design...
, which can be used to drain off the fishing nets when they are drawn onboard. Some of the larger Nordlanders have a detachable cabin that is used for shelter, often having a wood burning stove inside.

The Nordlander normally carries a large single square sail with the largest boats carrying a topsail
Topsail
A topsail is a sail set above another sail; on square-rigged vessels further sails may be set above topsails.- Square rig :On a square rigged vessel, a topsail is a square sail rigged above the course sail and below the topgallant sail where carried...
. It one of the few types of boats that still carries such a sail to the present day.

Oak
Oak
An oak is a tree or shrub in the genus Quercus , of which about 600 species exist. "Oak" may also appear in the names of species in related genera, notably Lithocarpus...
had been a favorite wood for ship builders for centuries for its resistance to rot, strength, and durability. However, oak is not native to Norway north of the county of Trøndelag
Trøndelag
Trøndelag is the name of a geographical region in the central part of Norway, consisting of the two counties Nord-Trøndelag and Sør-Trøndelag. The region is, together with Møre og Romsdal, part of a larger...
and is also a heavy wood which would make such boats difficult to pull up on shore, which was done on a daily basis. For these reasons, the materials used for the Nordland is almost exclusively made of pine
Pine
Pines are trees in the genus Pinus ,in the family Pinaceae. They make up the monotypic subfamily Pinoideae. There are about 115 species of pine, although different authorities accept between 105 and 125 species.-Etymology:...
, and in the northern regions, fir
Fir
Firs are a genus of 48–55 species of evergreen conifers in the family Pinaceae. They are found through much of North and Central America, Europe, Asia, and North Africa, occurring in mountains over most of the range...
. Pine and fir are lighter woods which would make it easier to be drawn up on shore, but at the expense of durability.

The Nordlandbot has a very long history in the north Norwegian coastline, with both Norwegians and Sami, who are first recorded as sailing such boats from about 950 onwards. Around 1000 AD the Sami were described as producing Nordlandbots for their Norwegian customers along the northern coastal farming communities, which the Norwegians soon started to build for themselves.

One of the biggest differences between the Norwegian and Sami built Nordlands is that the Sami 'sewed' the lapstrakes together using reindeer intestines, while the Norwegians used iron rivets. Nordland boats continued to be built for over 1000 years, and in the early 20th century it was still used for fishing and coastal transport.

One of the unique features of the Nordland is its ballast
Sailing ballast
Ballast is used in sailboats to provide moment to resist the lateral forces on the sail. Insufficiently ballasted boats will tend to tip, or heel, excessively in high winds. Too much heel may result in the boat capsizing. If a sailing vessel should need to voyage without cargo then ballast of...
system. Dozens of fist size round rocks are placed at the bottom of the boat to keep the boat weighted down. In the event that the boat is either swamped or capsizes, the rocks are designed to roll out of the boat which would lighten the boat and thus keep it afloat.

Nordland boats today are no longer used as primarily fishing boats but as pleasure craft and have annual races. The coat-of-arms of Nordland County shows the traditional boat - the Nordlandsbåt.