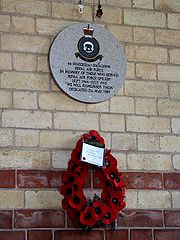 No. 44 Squadron of the Royal Air Force
Royal Air Force
The Royal Air Force is the aerial warfare service branch of the British Armed Forces. Formed on 1 April 1918, it is the oldest independent air force in the world...
is no longer operational. For most of its history it served as a heavy bomber squadron.

44 Squadron was formed on 24 July 1917 as a Home Defence Corps. The squadron pioneered the use of the Sopwith Camel
Sopwith Camel
The Sopwith Camel was a British First World War single-seat biplane fighter introduced on the Western Front in 1917. Manufactured by Sopwith Aviation Company, it had a short-coupled fuselage, heavy, powerful rotary engine, and concentrated fire from twin synchronized machine guns. Though difficult...
in night fighter
Night fighter
A night fighter is a fighter aircraft adapted for use at night or in other times of bad visibility...
operations. By the end of the First World War it was commanded by Arthur Harris, later known as Bomber Harris.

Disbanded in 1919, the squadron was reformed as a bomber squadron in March 1937 and equipped with Hawker Hind
Hawker Hind
-See also:-Bibliography:* Crawford, Alex. Hawker Hart Family. Redbourn, Hertfordshire, UK: Mushroom Model Publications Ltd., 2008. ISBN 83-89450-62-3....
s. Moving to RAF Waddington
RAF Waddington
RAF Waddington is a Royal Air Force station in Lincolnshire, England.-Formation:Waddington opened as a Royal Flying Corps flying training station in 1916 until 1920, when the station went into care and maintenance....
later that year, it was equipped with Bristol Blenheim
Bristol Blenheim
The Bristol Blenheim was a British light bomber aircraft designed and built by the Bristol Aeroplane Company that was used extensively in the early days of the Second World War. It was adapted as an interim long-range and night fighter, pending the availability of the Beaufighter...
s before changing to Handley Page Hampden
Handley Page Hampden
The Handley Page HP.52 Hampden was a British twin-engine medium bomber of the Royal Air Force serving in the Second World War. With the Whitley and Wellington, the Hampden bore the brunt of the early bombing war over Europe, taking part in the first night raid on Berlin and the first 1,000-plane...
s. During the war the squadron was subsequently based at RAF Dunholme Lodge
RAF Dunholme Lodge
RAF Dunholme Lodge was a Royal Air Force station during the Second World War. Located between the parishes of Welton and Dunholme in Lincolnshire, England.-History:...
,
near Dunholme
Dunholme
Dunholme is a village and civil parish in the West Lindsey district of Lincolnshire, England. It is on the A46 six miles north-east of Lincoln.According to the 2001 census the village had a population of 1,681.Dunholme has a post office and village shop, St...
, then RAF Spilsby
RAF Spilsby
-Units and aircraft based at Spilsby:-References:*Halpenny, Bruce Barrymore Action Stations: Wartime Military Airfields of Lincolnshire and the East Midlands v. 2 -External links:*...
at Great Steeping in Lincolnshire
Lincolnshire
Lincolnshire is a county in the east of England. It borders Norfolk to the south east, Cambridgeshire to the south, Rutland to the south west, Leicestershire and Nottinghamshire to the west, South Yorkshire to the north west, and the East Riding of Yorkshire to the north. It also borders...
.

At the outbreak of the Second World War, as part of Bomber Harris' No. 5 Group
No. 5 Group RAF
No. 5 Group was a Royal Air Force bomber group of the Second World War, led during the latter part by AVM Sir Ralph Cochrane.-History:The Group was formed on 1 September 1937 with headquarters at RAF Mildenhall....
, the squadron was commanded by John Boothman
John Boothman
Air Chief Marshal Sir John Nelson Boothman KCB KBE DFC AFC RAF was a senior Royal Air Force officer during World War II who went on to high command in the post-War years.- RAF career :...
, winner of the Schneider Trophy
Schneider Trophy
The Coupe d'Aviation Maritime Jacques Schneider was a prize competition for seaplanes. Announced by Jacques Schneider, a financier, balloonist and aircraft enthusiast, in 1911, it offered a prize of roughly £1,000. The race was held eleven times between 1913 and 1931...
in September 1931. It was one of only two squadrons to operate continuously throughout the war. There were two squadron commanders who held the Victoria Cross
Victoria Cross
The Victoria Cross is the highest military decoration awarded for valour "in the face of the enemy" to members of the armed forces of various Commonwealth countries, and previous British Empire territories....
- Wing Commanders Roderick Learoyd and John Nettleton
John Dering Nettleton
Squadron Leader John Dering Nettleton VC was a South African recipient of the Victoria Cross, the highest and most prestigious award for gallantry in the face of the enemy that can be awarded to British and Commonwealth forces....
.

In 1941 the squadron was renamed No. 44 (Rhodesia) Squadron in honour of the Rhodesian contribution to Britain's war effort, and also to recognise that up to 25% of the ground and air crew were Rhodesia
Rhodesia
Rhodesia , officially the Republic of Rhodesia from 1970, was an unrecognised state located in southern Africa that existed between 1965 and 1979 following its Unilateral Declaration of Independence from the United Kingdom on 11 November 1965...
n. The badge is based upon the seal of Lo Bengula (Lobengula
Lobengula
Lobengula Khumalo was the second and last king of the Ndebele people, usually pronounced Matabele in English. Both names, in the Sindebele language, mean "The men of the long shields", a reference to the Matabele warriors' use of the Zulu shield and spear.- Background :The Matabele were related to...
), the chief of the Matabele on conquest. The seal shows an elephant which, in the case of this unit, is intended to indicate heavy attacks.

No. 44 received its first Avro Lancaster
Avro Lancaster
The Avro Lancaster is a British four-engined Second World War heavy bomber made initially by Avro for the Royal Air Force . It first saw active service in 1942, and together with the Handley Page Halifax it was one of the main heavy bombers of the RAF, the RCAF, and squadrons from other...
, BT308, in late 1941 and became the first squadron to convert completely to Lancasters—flying their first operational missions in the aircraft on 3 March 1942. Total sorties and losses for the war were:


The squadron suffered the third highest overall casualties of RAF Bomber Command
RAF Bomber Command
RAF Bomber Command controlled the RAF's bomber forces from 1936 to 1968. During World War II the command destroyed a significant proportion of Nazi Germany's industries and many German cities, and in the 1960s stood at the peak of its postwar military power with the V bombers and a supplemental...
. In July 1945 the squadron exchanged places with No. 75 Squadron
No. 75 Squadron RAF
No. 75 Squadron of the Royal Air Force operated as a bomber unit in World War II, before being transferred to the Royal New Zealand Air Force in 1945.-First World War, Royal Flying Corps, Home Defence Squadron :...
in RAF Mepal
Mepal Airfield
Mepal Airfield, previously RAF Mepal, was an airfield near the village of Mepal, Cambridgeshire, England. It was an "expansion" airfield whose construction commenced in July 1942 and opened in June 1943.Mepal first hosted No...
in Cambridgeshire
Cambridgeshire
Cambridgeshire is a county in England, bordering Lincolnshire to the north, Norfolk to the northeast, Suffolk to the east, Essex and Hertfordshire to the south, and Bedfordshire and Northamptonshire to the west...
to prepare for transfer to Tiger Force
Tiger Force (air)
Tiger Force, also known as the Very Long Range Bomber Force, was the name given to a World War II British Commonwealth long-range heavy bomber force, formed in 1945, from squadrons serving with RAF Bomber Command in Europe, for proposed use against targets in Japan...
in the Far East
Far East
The Far East is an English term mostly describing East Asia and Southeast Asia, with South Asia sometimes also included for economic and cultural reasons.The term came into use in European geopolitical discourse in the 19th century,...
for the war on Japan
Japan
Japan is an island nation in East Asia. Located in the Pacific Ocean, it lies to the east of the Sea of Japan, China, North Korea, South Korea and Russia, stretching from the Sea of Okhotsk in the north to the East China Sea and Taiwan in the south...
.

After the war (from 1946–1947) the squadron was re-equipped with Avro Lincoln
Avro Lincoln
The Avro Type 694, better known as the Avro Lincoln, was a British four-engined heavy bomber, which first flew on 9 June 1944. Developed from the Avro Lancaster, the first Lincoln variants were known initially as the Lancaster IV and V, but were renamed Lincoln I and II...
s, converting to the Boeing Washington (the RAF name for the B-29 Superfortress in British service, 1951) and then the English Electric Canberra
English Electric Canberra
The English Electric Canberra is a first-generation jet-powered light bomber manufactured in large numbers through the 1950s. The Canberra could fly at a higher altitude than any other bomber through the 1950s and set a world altitude record of 70,310 ft in 1957...
during the Suez Crisis
Suez Crisis
The Suez Crisis, also referred to as the Tripartite Aggression, Suez War was an offensive war fought by France, the United Kingdom, and Israel against Egypt beginning on 29 October 1956. Less than a day after Israel invaded Egypt, Britain and France issued a joint ultimatum to Egypt and Israel,...
before disbanding on 16 July 1957.

After the advent of effective Soviet SAMs
Surface-to-air missile
A surface-to-air missile or ground-to-air missile is a missile designed to be launched from the ground to destroy aircraft or other missiles...
forced Bomber Command to re-assign V-bombers from high-altitude operations to low-level penetration operations, the squadron's Vulcans adopted a mission profile that included a 'pop-up' manouvre to above 12'000 ft for safe release of Yellow Sun Mk2, until in January 1968 the squadron was re-equipped with eight Vulcan B2 aircraft and eight WE.177B
WE.177
WE.177 was the last air-delivered tactical nuclear weapon of the British Armed Forces. There were three versions; WE.177A was a boosted fission weapon, while WE.177B and WE.177C were thermonuclear weapons...
laydown bombs which improved aircraft survivability by enabling aircraft to remain at low-level during weapon release.

Following the transfer of responsibility for the nuclear deterrent to the Royal Navy the squadron was re-assigned to SACEUR for tactical strike missions. In a high-intensity European war the squadron's role was to support land forces resisting a Soviet attack into Western Europe by striking deep into enemy-held areas beyond the forward edge of the battlefield, striking at enemy concentrations and infrastructure, first with conventional weapons and secondly with tactical nuclear weapons as required, should a conflict escalate to that stage.

The squadron's Vulcan B2s served mainly in that low-level penetration role until 1982 when they saw action during the Falklands War
Falklands War
The Falklands War , also called the Falklands Conflict or Falklands Crisis, was fought in 1982 between Argentina and the United Kingdom over the disputed Falkland Islands and South Georgia and the South Sandwich Islands...
. No. 44 Squadron was then disbanded on 21 December 1982.