Encyclopedia
Yellow Sun was the first British
United Kingdom
The United Kingdom of Great Britain and Northern IrelandIn the United Kingdom and Dependencies, other languages have been officially recognised as legitimate autochthonous languages under the European Charter for Regional or Minority Languages...
operational high-yield strategic nuclear weapon
Nuclear weapon
A nuclear weapon is an explosive device that derives its destructive force from nuclear reactions, either fission or a combination of fission and fusion. Both reactions release vast quantities of energy from relatively small amounts of matter. The first fission bomb test released the same amount...
. The name actually refers only to the outer casing; the warhead (or physics package) was known as "Green Grass" (in Yellow Sun Mk.1) and "Red Snow
Red Snow
Red Snow was a British thermonuclear weapon. Its physics package was apparently similar, if not identical, to that of the United States W28 nuclear warhead used in the B28 nuclear bomb and AGM-28 Hound Dog missile, with an explosive yield of approximately 1.1 megaton.The Red Snow warhead was...
" (in Yellow Sun Mk.2). The ENI or electronic neutron initiator (generator) was Blue Stone
Blue Stone
Blue Stone was the code name for the Unit 386D ENI or electronic neutron initiator for the first British operational high-yield strategic nuclear weapon, Violet Club.-References:**...
. 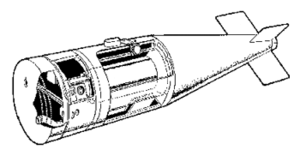 The casing was some 21 feet (6.4 metres) long, 48 inches (1.2 m) in diameter. The Mark 1 version with the Green Grass warhead weighed 7,250 lb (3.3 tonne
Tonne
The tonne, known as the metric ton in the US , often put pleonastically as "metric tonne" to avoid confusion with ton, is a metric system unit of mass equal to 1000 kilograms. The tonne is not an International System of Units unit, but is accepted for use with the SI...
s). The Mk.2 version with the lighter 1,700 lb Red Snow warhead had ballast added to maintain overall weight, ballistic and aerodynamic properties, and avoid further lengthy and expensive testing, and changes to the electrical power generating and airburst fusing equipment.

Unlike contemporary U.S.
United States
The United States of America is a federal constitutional republic comprising fifty states and a federal district...
bombs of similar power it did not use a parachute
Parachute
A parachute is a device used to slow the motion of an object through an atmosphere by creating drag, or in the case of ram-air parachutes, aerodynamic lift. Parachutes are usually made out of light, strong cloth, originally silk, now most commonly nylon...
to retard its fall, instead, the blunt nose was intended to slow the fall of the weapon sufficiently to permit the bomber to escape the detonation, and ensured that Yellow Sun did not encounter the transonic and supersonic shock waves that had caused much difficulty with barometric fusing gates that had plagued an earlier weapon, Blue Danube
Blue Danube (nuclear weapon)
Blue Danube was the first operational British nuclear weapon. It also went by a variety of other names, including Smallboy, the Mk.1 Atom Bomb, Special Bomb and OR.1001, a reference to the Operational Requirement it was built to fill...
.

Electrical power was supplied by duplicated ram-air turbines
Ram air turbine
A ram air turbine is a small turbine that is connected to a hydraulic pump, or electrical generator, installed in an aircraft and used as a power source...
located behind the twin air intakes in the flat nose. The earlier Blue Danube
Blue Danube (nuclear weapon)
Blue Danube was the first operational British nuclear weapon. It also went by a variety of other names, including Smallboy, the Mk.1 Atom Bomb, Special Bomb and OR.1001, a reference to the Operational Requirement it was built to fill...
design had relied on lead–acid batteries that had proven to be unreliable and time-consuming in flight-preparation.

Yellow Sun Stage 1 and Stage 2 were the original designations. Stage 1 was intended as an interim design to carry a one megaton Green Bamboo warhead of the "layer-cake" type thought similar to the Soviet JOE.4
Joe 4
Joe 4 was an American nickname for the first Soviet test of a thermonuclear weapon on August 12, 1953. It utilized a scheme in which fission and fusion fuel were "layered", a design known as the Sloika model in the Soviet Union...
and the US "Alarm Clock" concepts. These hybrid designs are not now regarded as truly thermonuclear, but were then thought to be a stepping-stone on the route to a fusion bomb. Stage 2 was to follow when a true thermonuclear warhead based on the Granite design became available.

After Green Bamboo was abandoned a decision was made to use the Interim Megaton Weapon known as Green Grass in the Yellow Sun casing and designate it as Yellow Sun Mk.1 until better warheads were available for a Mk.2. Green Grass was of similar layout to Green Bamboo, although it was not thermonuclear, being a very large unboosted pure fission
Nuclear fission
In nuclear physics and nuclear chemistry, nuclear fission is a nuclear reaction in which the nucleus of an atom splits into smaller parts , often producing free neutrons and photons , and releasing a tremendous amount of energy...
warhead that was based in part on the core of the Orange Herald
Orange Herald
- Technical :Orange Herald was a fusion boosted British fission nuclear weapon, comprising a U-235 primary surrounded by lithium deuteride. 'Herald' was suitable for mounting on a missile, utilizing 117 kg of U-235...
device tested at Grapple
Operation Grapple
Operation Grapple, and operations Grapple X, Grapple Y and Grapple Z, were the names of British nuclear tests of the hydrogen bomb. They were held 1956—1958 at Malden Island and Christmas Island in the central Pacific Ocean. Nine nuclear detonations took place during the trials, resulting in...
, with some of the implosion and firing features of Green Bamboo. Five Green Grass warheads were fitted in larger, older casings derived from Blue Danube and known as Violet Club. These five warheads were later transferred to the Yellow Sun Mk.1 casings and supplemented by further warheads totalling 37. Green Grass yield was originally stated to the Royal Air Force
Royal Air Force
The Royal Air Force is the aerial warfare service branch of the British Armed Forces. Formed on 1 April 1918, it is the oldest independent air force in the world...
(RAF) as 500 kilotons of TNT equivalent
TNT equivalent
TNT equivalent is a method of quantifying the energy released in explosions. The ton of TNT is a unit of energy equal to 4.184 gigajoules, which is approximately the amount of energy released in the detonation of one ton of TNT...
(2.1 PJ), but the designers estimate was later revised downwards to 400 kt of TNT. The Green Grass warhead was never tested. It used a dangerously large quantity of fissile material thought to be in excess of 70 kg, considerably more than an uncompressed critical mass
Critical mass
A critical mass is the smallest amount of fissile material needed for a sustained nuclear chain reaction. The critical mass of a fissionable material depends upon its nuclear properties A critical mass is the smallest amount of fissile material needed for a sustained nuclear chain reaction. The...
. It was kept subcritical by being fashioned into a thin-walled spherical shell. To guard against accidental crushing of the core into a critical condition the shell was filled with 133,000 steel ball-bearings weighing 450 kg. These had to be removed before flight. The RAF thought it unsafe.

Red Snow
Red Snow
Red Snow was a British thermonuclear weapon. Its physics package was apparently similar, if not identical, to that of the United States W28 nuclear warhead used in the B28 nuclear bomb and AGM-28 Hound Dog missile, with an explosive yield of approximately 1.1 megaton.The Red Snow warhead was...
was the US W-28 warhead used in the US Mk-28 nuclear bomb. This was anglicised to adapt it to British engineering practices, and manufactured in Britain using British fissile materials. For further information see the "Deployment" section below.

Deployment started in 1959-60. Yellow Sun Mk.1 was intended as an "emergency" weapon, and had not been engineered for reliable long-term stockpiling. It was always envisaged that a Mk.2 version would be available later fitted with a true thermonuclear warhead derived from the Granite type tested at Grapple, or an American type made available after the 1958 Anglo-US Bilateral Agreement. It was carried only by RAF V-bombers. In September 1958 a decision was made to abandon the Granite type warheads intended for Yellow Sun Mk.2 (and Blue Steel, and Blue Streak
Blue Streak missile
The Blue Streak missile was a British medium range ballistic missile . The Operational Requirement for the missile was issued in 1955 and the design was complete by 1957...
MRBM) and instead adopt the US W-28 warhead used in the US Mk-28 nuclear bomb
B28 nuclear bomb
The B28, originally Mark 28, was a thermonuclear bomb carried by U.S. tactical fighter bombers and bomber aircraft. From 1962 to 1972 under the NATO nuclear weapons sharing program, American B28s also equipped six Europe-based Canadian CF-104 squadrons known as the RCAF Nuclear Strike Force...
. This was anglicised to adapt it to British engineering practices, and manufactured in Britain using British fissile materials and known as Red Snow.

Red Snow was both more powerful, lighter and smaller than Green Grass. It was always envisaged that the Yellow Sun bomb casing would be adapted for successor warheads to minimise unessential development time and cost. Yellow Sun Mk. 2 entered service in 1961, and remained the primary air-dropped strategic weapon until replaced with WE.177B
WE.177
WE.177 was the last air-delivered tactical nuclear weapon of the British Armed Forces. There were three versions; WE.177A was a boosted fission weapon, while WE.177B and WE.177C were thermonuclear weapons...
in 1966.

Although the first British designed thermonuclear weapon to be deployed, Yellow Sun was not the first to be deployed with the RAF. US Mk-28 and Mk-43
B43 nuclear bomb
The B43 was a United States air-dropped variable yield nuclear weapon used by a wide variety of fighter bomber and bomber aircraft.The B43 was developed from 1956 by Los Alamos National Laboratory, entering production in 1959. It entered service in April 1961. Total production was 2,000 weapons,...
thermonuclear bombs and others had been supplied to the RAF for use in V-bombers prior to the deployment of Yellow Sun. Some bombers of the V-force only ever used American weapons supplied under dual-key arrangements.