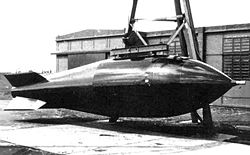 Blue Danube was the first operational British nuclear weapon
Nuclear weapon
A nuclear weapon is an explosive device that derives its destructive force from nuclear reactions, either fission or a combination of fission and fusion. Both reactions release vast quantities of energy from relatively small amounts of matter. The first fission bomb test released the same amount...
. It also went by a variety of other names, including Smallboy, the Mk.1 Atom Bomb, Special Bomb and OR.1001, a reference to the Operational Requirement
Operational Requirement
An Operational Requirement or was a UK Air Ministry document setting out the required characteristics for a future military aircraft or weapon system....
it was built to fill. The RAF V bomber
V bomber
The term V bomber was used for the Royal Air Force aircraft during the 1950s and 1960s that comprised the United Kingdom's strategic nuclear strike force known officially as the V-force or Bomber Command Main Force...
force was initially meant to use Blue Danube as their primary armament at a time when the first hydrogen bomb had not been detonated, and the British military planners still believed that an atomic war could be fought and won using atomic bombs of similar yield to the Hiroshima bomb
Little Boy
"Little Boy" was the codename of the atomic bomb dropped on Hiroshima on August 6, 1945 by the Boeing B-29 Superfortress Enola Gay, piloted by Colonel Paul Tibbets of the 393rd Bombardment Squadron, Heavy, of the United States Army Air Forces. It was the first atomic bomb to be used as a weapon...
. For that reason the stockpile planned was for up to 800 bombs with yields
Nuclear weapon yield
The explosive yield of a nuclear weapon is the amount of energy discharged when a nuclear weapon is detonated, expressed usually in the equivalent mass of trinitrotoluene , either in kilotons or megatons , but sometimes also in terajoules...
of approx. 10-12 kilotons. V bomber bomb bays were sized to carry Blue Danube, the smallest-size nuclear bomb that was possible to design given the technology of the day (1947) when their plans were formulated.

Initial designs for the Blue Danube warhead were based on research derived from Hurricane
Operation Hurricane
Operation Hurricane was the test of the first British atomic device on 3 October 1952. A plutonium implosion device was detonated in the lagoon between the Montebello Islands, Western Australia....
, the first British fission
Nuclear fission
In nuclear physics and nuclear chemistry, nuclear fission is a nuclear reaction in which the nucleus of an atom splits into smaller parts , often producing free neutrons and photons , and releasing a tremendous amount of energy...
device (which was not designed nor employed as a weapon), tested in 1952. The actual Blue Danube warhead was proof-tested at the Marcoo (surface) and Kite (air-drop) nuclear trials sites in Maralinga, Australia, by a team of Australian, British and Canadian scientistsin late 1956.

Blue Danube added a ballistically shaped casing to the existing Hurricane physics package, with four flip-out fins to ensure a stable ballistic trajectory from the planned release height of 50,000 ft. It initially used a plutonium
Plutonium
Plutonium is a transuranic radioactive chemical element with the chemical symbol Pu and atomic number 94. It is an actinide metal of silvery-gray appearance that tarnishes when exposed to air, forming a dull coating when oxidized. The element normally exhibits six allotropes and four oxidation...
core
Pit (nuclear weapon)
The pit is the core of an implosion weapon – the fissile material and any neutron reflector or tamper bonded to it. Some weapons tested during the 1950s used pits made with U-235 alone, or in composite with plutonium, but all-plutonium pits are the smallest in diameter and have been the standard...
, but all service versions were modified to use a composite plutonium/U-235
Uranium-235
- References :* .* DOE Fundamentals handbook: Nuclear Physics and Reactor theory , .* A piece of U-235 the size of a grain of rice can produce energy equal to that contained in three tons of coal or fourteen barrels of oil. -External links:* * * one of the earliest articles on U-235 for the...
core, and a version was also tested with a uranium-only core. The Service chiefs insisted on a yield of between 10-12 kT for two reasons: firstly, to minimise usage of scarce and expensive fissile material; and secondly, to minimise the risk of predetonation, a phenomenon then little understood, and the primary reason for using a composite core of concentric shells of plutonium and U-235. Although there were many plans for versions with higher yields, some up to 40 kT, none came to fruition, largely because of the scarcity of fissile materials, and there is no evidence that any were seriously contemplated.

The first Blue Danube was delivered to stockpile at RAF Wittering
RAF Wittering
RAF Wittering is a Royal Air Force station within the unitary authority area of Peterborough, Cambridgeshire. Although Stamford in Lincolnshire is the nearest town, the runways of RAF Wittering cross the boundary between Cambridgeshire and Northamptonshire....
in November 1953 although there were no aircraft equipped to carry it until the following year. No. 1321 Flight RAF
No. 1321 Flight RAF
No. 1321 Bomber Training Flight RAF was first formed at RAF Bottesford on 1 September 1944 as a fighter affiliation unit to train bomber crews from No. 5 Group Bomber Command how to defend their aircraft. The Flight was disbanded two months later on 1 November 1944 and absorbed by the units they...
was established at RAF Wittering in April 1954 as a Vickers Valiant
Vickers Valiant
The Vickers-Armstrongs Valiant was a British four-jet bomber, once part of the Royal Air Force's V bomber nuclear force in the 1950s and 1960s...
unit to integrate the Blue Danube nuclear weapon into RAF service. The Short Sperrin
Short Sperrin
The Short SA.4 Sperrin was a British jet bomber design of the early 1950s built by Short Brothers and Harland of Belfast, popularly abbreviated "Shorts". It first flew in 1951...
was also able to carry the Blue Danube and had been ordered as a fall-back option, in case the V-Bomber projects proved unsuccessful. Declassified archives show that a total number of 58 were produced before production shifted in 1958 to the smaller and more capable Red Beard
Red Beard (nuclear weapon)
Red Beard was the first British tactical nuclear weapon. It was carried by the English Electric Canberra and the V bombers of the Royal Air Force, and by the Blackburn Buccaneers, Sea Vixens and Supermarine Scimitars of the Royal Navy's Fleet Air Arm...
weapon, which could accept the Blue Danube fissile core and also could be carried by much smaller aircraft. It seems unlikely that all 58 Blue Danube weapons were operational at any given time. Blue Danube was retired in 1962.

Major deficiencies with Blue Danube included the use of unreliable lead-acid accumulators to supply power to the firing circuits and radar altimeter
Radar altimeter
A radar altimeter, radio altimeter, low range radio altimeter or simply RA measures altitude above the terrain presently beneath an aircraft or spacecraft...
s. Later weapons used the more reliable ram-air turbine
Ram air turbine
A ram air turbine is a small turbine that is connected to a hydraulic pump, or electrical generator, installed in an aircraft and used as a power source...
-generators or thermal batteries. Blue Danube was not really engineered as a weapon equipped to withstand the rigours of service life
Service life
A product's service life is its expected lifetime, or the acceptable period of use in service. It is the time that any manufactured item can be expected to be 'serviceable' or supported by its manufacturer....
. It was really a scientific experiment on a gigantic scale, which needed to be re-engineered to meet Service requirements. That re-engineered weapon became Red Beard
Red Beard (nuclear weapon)
Red Beard was the first British tactical nuclear weapon. It was carried by the English Electric Canberra and the V bombers of the Royal Air Force, and by the Blackburn Buccaneers, Sea Vixens and Supermarine Scimitars of the Royal Navy's Fleet Air Arm...
. A similar account could be written of the first U.S. atomic bomb, Fat Man
Fat Man
"Fat Man" is the codename for the atomic bomb that was detonated over Nagasaki, Japan, by the United States on August 9, 1945. It was the second of the only two nuclear weapons to be used in warfare to date , and its detonation caused the third man-made nuclear explosion. The name also refers more...
, which was quickly re-engineered after World War II
World War II
World War II, or the Second World War , was a global conflict lasting from 1939 to 1945, involving most of the world's nations—including all of the great powers—eventually forming two opposing military alliances: the Allies and the Axis...
.

Parts of a Blue Danube can be viewed by the public at Sellafield Visitors Centre in Cumbria
Cumbria
Cumbria , is a non-metropolitan county in North West England. The county and Cumbria County Council, its local authority, came into existence in 1974 after the passage of the Local Government Act 1972. Cumbria's largest settlement and county town is Carlisle. It consists of six districts, and in...
.