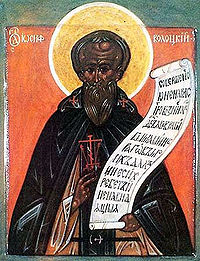 Joseph Volotsky — also known as Joseph of Volotsk or Joseph of Volokolamsk ; secular name Ivan Sanin (1439 or 1440 - September 9, 1515) — was a prominent caesaropapist
Caesaropapism
Caesaropapism is the idea of combining the power of secular government with, or making it superior to, the spiritual authority of the Church; especially concerning the connection of the Church with government. The term caesaropapism was coined by Max Weber, who defined it as follows: “a secular,...
ideologist of the Russian Orthodox Church
Russian Orthodox Church
The Russian Orthodox Church or, alternatively, the Moscow Patriarchate The ROC is often said to be the largest of the Eastern Orthodox churches in the world; including all the autocephalous churches under its umbrella, its adherents number over 150 million worldwide—about half of the 300 million...
who led the party defending monastic landownership.

He is a saint
Saint
A saint is a holy person. In various religions, saints are people who are believed to have exceptional holiness.In Christian usage, "saint" refers to any believer who is "in Christ", and in whom Christ dwells, whether in heaven or in earth...
(as is his most prominent opponent, Nil Sorsky
Nil Sorsky
Nil Sorsky was a leader of the Russian medieval movement opposing ecclesiastic landownership . Nil Sorsky is venerated as a saint in the Russian Orthodox Church. His feast day is on the anniversary of his repose on May 7.-Early life:Before becoming a monk, Nil Sorsky worked as a scribe and was...
); his memory is celebrated on 9 September and 18 October (dates in the Julian Calendar
Julian calendar
The Julian calendar began in 45 BC as a reform of the Roman calendar by Julius Caesar. It was chosen after consultation with the astronomer Sosigenes of Alexandria and was probably designed to approximate the tropical year .The Julian calendar has a regular year of 365 days divided into 12 months...
).

Initially, Joseph Volotsky was connected with the appanage
Appanage
An apanage or appanage or is the grant of an estate, titles, offices, or other things of value to the younger male children of a sovereign, who would otherwise have no inheritance under the system of primogeniture...
princes of Volokolamsk (brothers of Ivan III) and defended the right of local ecclesiastical and secular feudals to oppose the authority of the grand prince
Grand Prince
The title grand prince or great prince ranked in honour below emperor and tsar and above a sovereign prince .Grand duke is the usual and established, though not literal, translation of these terms in English and Romance languages, which do not normally use separate words for a "prince" who reigns...
. Later in his life, he severed his relations with the opposition and took the side of the grand prince, sealing this alliance by transferring Joseph-Volokolamsk Monastery to the patronage of Vasili III in 1507.

During the Church Sobor
Sobor
A sobor is a council of bishops together with other clerical and lay delegates representing the church as a whole in matters of importance...
of 1503, Joseph Volotsky and his supporters (Josephites) managed to scrap the project of elimination of monastic landownership, proposed by the nestiazhateli, or non-possessors
Non-possessors
Non-possessors belonged to a 16th-century movement in the Russian Orthodox Church in opposition to ecclesiastical land-ownership...
(those who opposed monastic landownership), in the persons of the so-called Transvolgan elders led by Nil Sorsky
Nil Sorsky
Nil Sorsky was a leader of the Russian medieval movement opposing ecclesiastic landownership . Nil Sorsky is venerated as a saint in the Russian Orthodox Church. His feast day is on the anniversary of his repose on May 7.-Early life:Before becoming a monk, Nil Sorsky worked as a scribe and was...
and Vassian Patrikeyev
Vassian Patrikeyev
Vassian Patrikeyev, also known as Vassian Kosoy was a Russian ecclesiastic and political figure and writer...
. Joseph Volotsky addressed a number of epistle
Epistle
An epistle is a writing directed or sent to a person or group of people, usually an elegant and formal didactic letter. The epistle genre of letter-writing was common in ancient Egypt as part of the scribal-school writing curriculum. The letters in the New Testament from Apostles to Christians...
s to the nestyazhateli, in which he tried to prove the legality of monastic landownership and justify the rich décor of churches. Eventually, Joseph Volotsky gained the upper hand and the monasteries preserved their landholdings.


Ideas on the authority of the tsar

The triumph of the possessor party went hand in hand with Joseph's efforts to bolster the position of Russia's grand princes, who were now increasingly referred to as tsar
Tsar
Tsar is a title used to designate certain European Slavic monarchs or supreme rulers. As a system of government in the Tsardom of Russia and Russian Empire, it is known as Tsarist autocracy, or Tsarism...
s, succeeding to the title of universal emperor
Emperor
An emperor is a monarch, usually the sovereign ruler of an empire or another type of imperial realm. Empress, the female equivalent, may indicate an emperor's wife or a woman who rules in her own right...
s of Byzantium
Byzantium
Byzantium was an ancient Greek city, founded by Greek colonists from Megara in 667 BC and named after their king Byzas . The name Byzantium is a Latinization of the original name Byzantion...
. Joseph Volotsky restated the formula of an early Byzantine ecclesiastical writer Agapetus
Agapetus (deacon)
Agapetus was a deacon of the church of Hagia Sophia at Constantinople , reputed tutor of Justinian, and author of a series of exhortations in seventy-two short chapters addressed to that emperor...
that the tsar was a "man in essence, but his power is that of God" and that he was God’s deputy on Earth. According to Joseph, however, since the main duty of the tsar is to care for the well-being of the Christian Church
Christian Church
The Christian Church is the assembly or association of followers of Jesus Christ. The Greek term ἐκκλησία that in its appearances in the New Testament is usually translated as "church" basically means "assembly"...
, he is legitimate only as long as he adheres to Church rules and moral obligations.

Joseph Volotsky is also known to have been a staunch opponent of the heresy
Heresy
Heresy is a controversial or novel change to a system of beliefs, especially a religion, that conflicts with established dogma. It is distinct from apostasy, which is the formal denunciation of one's religion, principles or cause, and blasphemy, which is irreverence toward religion...
which was spreading in Russia
Russia
Russia or , officially known as both Russia and the Russian Federation , is a country in northern Eurasia. It is a federal semi-presidential republic, comprising 83 federal subjects...
at that time (Judaizers
Sect of Skhariya the Jew
The Sect of Skhariya the Jew, much more commonly known as the Heresy of the Judaizers or Zhidovstvuyushchiye, was a sect that appeared in Novgorod the Great and Grand Duchy of Moscow in the second half of the 15th century and marked the beginning of a new era of heresy in Russia...
). During the Church Sobor of 1504, he demanded that all heretics be executed.

In his major work, called The Enlightener (Просветитель), which consisted of 16 chapters, he tried to prove the wrongfulness of the "new teaching" in order to be able to prosecute the heretics and convince people not to believe in the sincerity of their repentance
Repentance
Repentance is a change of thought to correct a wrong and gain forgiveness from a person who is wronged. In religious contexts it usually refers to confession to God, ceasing sin against God, and resolving to live according to religious law...
. He called for an all-out search for heretics and their imprisonment and execution.

Joseph's doctrines became a part of the official theology of the Russian Orthodox Church
Russian Orthodox Church
The Russian Orthodox Church or, alternatively, the Moscow Patriarchate The ROC is often said to be the largest of the Eastern Orthodox churches in the world; including all the autocephalous churches under its umbrella, its adherents number over 150 million worldwide—about half of the 300 million...
following his local canonization
Canonization
Canonization is the act by which a Christian church declares a deceased person to be a saint, upon which declaration the person is included in the canon, or list, of recognized saints. Originally, individuals were recognized as saints without any formal process...
in 1579 and national canonization in 1591.