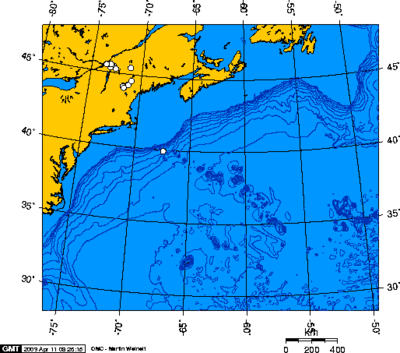 The New England hotspot, also referred to as the Great Meteor hotspot, is a long-lived volcanic
Volcano
2. Bedrock3. Conduit 4. Base5. Sill6. Dike7. Layers of ash emitted by the volcano8. Flank| 9. Layers of lava emitted by the volcano10. Throat11. Parasitic cone12. Lava flow13. Vent14. Crater15...
hotspot
Hotspot (geology)
The places known as hotspots or hot spots in geology are volcanic regions thought to be fed by underlying mantle that is anomalously hot compared with the mantle elsewhere. They may be on, near to, or far from tectonic plate boundaries. There are two hypotheses to explain them...
in the Atlantic Ocean
Atlantic Ocean
The Atlantic Ocean is the second-largest of the world's oceanic divisions. With a total area of about , it covers approximately 20% of the Earth's surface and about 26% of its water surface area...
. The hotspot's most recent eruptive center is the Great Meteor Seamount
Great Meteor Seamount
The Great Meteor Seamount is a large guyot located south of the Azores in the Atlantic Ocean. It is the New England hotspot's most recent eruptive center and is one of the most completely investigated seamounts in the world. This guyot rises up from a depth of almost 4,800 meters to about 270...
, and it probably created a short line of mid to late-Tertiary
Tertiary
The Tertiary is a deprecated term for a geologic period 65 million to 2.6 million years ago. The Tertiary covered the time span between the superseded Secondary period and the Quaternary...
age seamount
Seamount
A seamount is a mountain rising from the ocean seafloor that does not reach to the water's surface , and thus is not an island. These are typically formed from extinct volcanoes, that rise abruptly and are usually found rising from a seafloor of depth. They are defined by oceanographers as...
s on the African Plate
African Plate
The African Plate is a tectonic plate which includes the continent of Africa, as well as oceanic crust which lies between the continent and various surrounding ocean ridges.-Boundaries:...
but appears to be currently inactive.

The New England hotspot track is used to estimate the movement of the North American Plate
North American Plate
The North American Plate is a tectonic plate covering most of North America, Greenland, Cuba, Bahamas, and parts of Siberia, Japan and Iceland. It extends eastward to the Mid-Atlantic Ridge and westward to the Chersky Range in eastern Siberia. The plate includes both continental and oceanic crust...
away from the African Plate
African Plate
The African Plate is a tectonic plate which includes the continent of Africa, as well as oceanic crust which lies between the continent and various surrounding ocean ridges.-Boundaries:...
from early Cretaceous
Cretaceous
The Cretaceous , derived from the Latin "creta" , usually abbreviated K for its German translation Kreide , is a geologic period and system from circa to million years ago. In the geologic timescale, the Cretaceous follows the Jurassic period and is followed by the Paleogene period of the...
period to the present.

About 200 million years ago, just as the Atlantic Ocean was starting to form, the area northwest of Hudson Bay
Hudson Bay
Hudson Bay , sometimes called Hudson's Bay, is a large body of saltwater in northeastern Canada. It drains a very large area, about , that includes parts of Ontario, Quebec, Saskatchewan, Alberta, most of Manitoba, southeastern Nunavut, as well as parts of North Dakota, South Dakota, Minnesota,...
was over the New England hotspot. About 50 million years later, as the Atlantic Ocean opened slightly, the plume was under present-day Ontario
Ontario
Ontario is a province of Canada, located in east-central Canada. It is Canada's most populous province and second largest in total area. It is home to the nation's most populous city, Toronto, and the nation's capital, Ottawa....
, creating numerous kimberlite
Kimberlite
Kimberlite is a type of potassic volcanic rock best known for sometimes containing diamonds. It is named after the town of Kimberley in South Africa, where the discovery of an diamond in 1871 spawned a diamond rush, eventually creating the Big Hole....
fields. About 125 million years ago, the hotspot created the magma
Magma
Magma is a mixture of molten rock, volatiles and solids that is found beneath the surface of the Earth, and is expected to exist on other terrestrial planets. Besides molten rock, magma may also contain suspended crystals and dissolved gas and sometimes also gas bubbles. Magma often collects in...
intrusion
Intrusion
An intrusion is liquid rock that forms under Earth's surface. Magma from under the surface is slowly pushed up from deep within the earth into any cracks or spaces it can find, sometimes pushing existing country rock out of the way, a process that can take millions of years. As the rock slowly...
s of the Monteregian Hills in southern Quebec
Quebec
Quebec or is a province in east-central Canada. It is the only Canadian province with a predominantly French-speaking population and the only one whose sole official language is French at the provincial level....
, Canada
Canada
Canada is a North American country consisting of ten provinces and three territories. Located in the northern part of the continent, it extends from the Atlantic Ocean in the east to the Pacific Ocean in the west, and northward into the Arctic Ocean...
. The lack of an obvious track west of the Monteregian Hills may be due either to failure of the plume to penetrate the Canadian Shield
Canadian Shield
The Canadian Shield, also called the Laurentian Plateau, or Bouclier Canadien , is a vast geological shield covered by a thin layer of soil that forms the nucleus of the North American or Laurentia craton. It is an area mostly composed of igneous rock which relates to its long volcanic history...
, to the lack of recognizable intrusions, or to strengthening of the plume when it approached the Monteregian Hills. About 25 million years later, the hotspot created the magma intrusions of the White Mountains
White Mountains (New Hampshire)
The White Mountains are a mountain range covering about a quarter of the state of New Hampshire and a small portion of western Maine in the United States. Part of the Appalachian Mountains, they are considered the most rugged mountains in New England...
in New Hampshire
New Hampshire
New Hampshire is a state in the New England region of the northeastern United States of America. The state was named after the southern English county of Hampshire. It is bordered by Massachusetts to the south, Vermont to the west, Maine and the Atlantic Ocean to the east, and the Canadian...
. As the North American Plate
North American Plate
The North American Plate is a tectonic plate covering most of North America, Greenland, Cuba, Bahamas, and parts of Siberia, Japan and Iceland. It extends eastward to the Mid-Atlantic Ridge and westward to the Chersky Range in eastern Siberia. The plate includes both continental and oceanic crust...
moved westward, it created the New England Seamount chain
New England Seamount chain
The New England Seamount chain is an underwater chain of seamounts in the Atlantic Ocean stretching over 1,000 kilometers from the edge of the Georges Bank off the coast of Massachusetts. The chain consists of over twenty extinct volcanic peaks, many rising over 4,000 meters from the seabed...
between 80 and 100 million years ago. When the hotspot created the New England Seamount chain, it might have been the seventh or eighth most active hotspot today. The hotspot declined in activity after it made Nashville Seamount
Nashville Seamount
The Nashville Seamount is a seamount in the Atlantic Ocean. It is part of the New England Seamount chain, which was active more than 100 million years ago. It was formed when the North American Plate moved over the New England hotspot....
about 83 million years ago. The hotspot created the Corner Rise Seamounts
Corner Rise Seamounts
The Corner Rise Seamounts are a chain of extinct submarine volcanoes in the northern Atlantic Ocean east of the New England Seamount chain.-Seamounts:Seamounts within the Corner Rise Seamount chain include:*Bean Seamount*Caloosahatchee Seamount...
about 75 million years ago. Renewed volcanic activity formed the Great Meteor Seamount chain 10-20 million years ago.