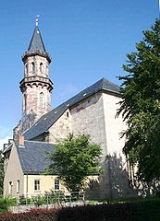 Encyclopedia
Neustadt bei Coburg is a town in the district of Coburg
Coburg (district)
Coburg is a district in Bavaria, Germany. It is bounded by the districts of Kronach, Lichtenfels, Bamberg and Haßberge, and by the state of Thuringia . The district is surrounding, but not including the city of Coburg.- History :The history of the district is largely influenced by the city of Coburg...
in northern Bavaria
Bavaria
Bavaria, formally the Free State of Bavaria is a state of Germany, located in the southeast of Germany. With an area of , it is the largest state by area, forming almost 20% of the total land area of Germany...
, Germany
Germany
Germany , officially the Federal Republic of Germany , is a federal parliamentary republic in Europe. The country consists of 16 states while the capital and largest city is Berlin. Germany covers an area of 357,021 km2 and has a largely temperate seasonal climate...
. It is situated 15 km northeast of Coburg
Coburg
Coburg is a town located on the Itz River in Bavaria, Germany. Its 2005 population was 42,015. Long one of the Thuringian states of the Wettin line, it joined with Bavaria by popular vote in 1920...
, as its name indicates.

In the second half of the 12th century, Count Hermann von Wolweswac founded the town of Neustadt with the building of a castle. Governance of the city was left to the Counts of Andechs
Andechs
The Benedictine abbey of Andechs is a place of pilgrimage on a hill east of the Ammersee in the Landkreis of Starnberg in Germany, in the municipality Andechs. Andechs Abbey is famed for its flamboyant Baroque church and its brewery...
, the later Dukes of Meranien. Neustadt is first mentioned in a document from the 16th of June, 1248, describing the "market forum" ("Marktflecken") of Neustadt. In 1316, Neustadt was designated a City, and in 1353, Neustadt came under the care of Coburg, making it a possession of the House of Wettin, which is remained until the First World War. Under Wettin rule, the city acquired the two-tailed, red and black lions which grace its coat of arms.

Neustadt lay on a major trade route between Nürnberg and Leipzig
Leipzig
Leipzig Leipzig has always been a trade city, situated during the time of the Holy Roman Empire at the intersection of the Via Regia and Via Imperii, two important trade routes. At one time, Leipzig was one of the major European centres of learning and culture in fields such as music and publishing...
, and in the 14th century, the city received a parish church. By the end of the Middle Ages, the city had a population of roughly 570.

By the time the Thirty Years' War
Thirty Years' War
The Thirty Years' War was fought primarily in what is now Germany, and at various points involved most countries in Europe. It was one of the most destructive conflicts in European history....
began, Neustadt's population had grown to roughly 1000. When the war began, the leaders of Coburg declared their neutrality. However, because the trade route on which Neustadt lay came to be used as a route of transportation by the various combatants, the city suffered greatly. Still greater damage came in 1636, when a large fire, unrelated to the war, which burnt down over half of the city.

In 1839, a second, larger fire destroyed 179 of the city's 226 houses, as well as the city hall and archives, and heavily damaged the church.


End of World War I, decision to join Bavaria

When the First World War ended in 1918 and the Weimar Republic
Weimar Republic
The Weimar Republic is the name given by historians to the parliamentary republic established in 1919 in Germany to replace the imperial form of government...
was founded, the Duchy of Saxe-Coburg-Gotha ceased to be a duchy
Duchy
A duchy is a territory, fief, or domain ruled by a duke or duchess.Some duchies were sovereign in areas that would become unified realms only during the Modern era . In contrast, others were subordinate districts of those kingdoms that unified either partially or completely during the Medieval era...
. At first, it formed the Free State of Coburg. This state proved so small as an administrative unit that the decision was made to have the Free State become a part of either Thuringia
Thuringia
The Free State of Thuringia is a state of Germany, located in the central part of the country.It has an area of and 2.29 million inhabitants, making it the sixth smallest by area and the fifth smallest by population of Germany's sixteen states....
or Bavaria
Bavaria
Bavaria, formally the Free State of Bavaria is a state of Germany, located in the southeast of Germany. With an area of , it is the largest state by area, forming almost 20% of the total land area of Germany...
. A referendum, held in 1919, saw Neustadt (and the rest of the Free State of Coburg) decide, by overwhelming majority, against Thuringia and thus for Bavaria. Neustadt politician and industrialist Max Oscar Arnold had actively campaigned for union with Bavaria.

Most residents of Neustadt bei Coburg are members of the Evangelical Church
Evangelical Church in Germany
The Evangelical Church in Germany is a federation of 22 Lutheran, Unified and Reformed Protestant regional church bodies in Germany. The EKD is not a church in a theological understanding because of the denominational differences. However, the member churches share full pulpit and altar...
(Lutheranism
Lutheranism
Lutheranism is a major branch of Western Christianity that identifies with the theology of Martin Luther, a German reformer. Luther's efforts to reform the theology and practice of the church launched the Protestant Reformation...
). But there are also communities of Jehovah's Witnesses
Jehovah's Witnesses
Jehovah's Witnesses is a millenarian restorationist Christian denomination with nontrinitarian beliefs distinct from mainstream Christianity. The religion reports worldwide membership of over 7 million adherents involved in evangelism, convention attendance of over 12 million, and annual...
, Seventh-day Adventists
Seventh-day Adventist Church
The Seventh-day Adventist Church is a Protestant Christian denomination distinguished by its observance of Saturday, the original seventh day of the Judeo-Christian week, as the Sabbath, and by its emphasis on the imminent second coming of Jesus Christ...
and Muslim
Muslim
A Muslim, also spelled Moslem, is an adherent of Islam, a monotheistic, Abrahamic religion based on the Quran, which Muslims consider the verbatim word of God as revealed to prophet Muhammad. "Muslim" is the Arabic term for "submitter" .Muslims believe that God is one and incomparable...
s.