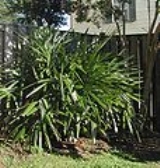 Encyclopedia
Rhapidophyllum hystrix (Needle Palm) is a palm
Arecaceae
Arecaceae or Palmae , are a family of flowering plants, the only family in the monocot order Arecales. There are roughly 202 currently known genera with around 2600 species, most of which are restricted to tropical, subtropical, and warm temperate climates...
, the sole member of the genus Rhapidophyllum. It is native to the southeastern United States
Southeastern United States
The Southeastern United States, colloquially referred to as the Southeast, is the eastern portion of the Southern United States. It is one of the most populous regions in the United States of America....
, from central Florida
Florida
Florida is a state in the southeastern United States, located on the nation's Atlantic and Gulf coasts. It is bordered to the west by the Gulf of Mexico, to the north by Alabama and Georgia and to the east by the Atlantic Ocean. With a population of 18,801,310 as measured by the 2010 census, it...
to Georgia
Georgia (U.S. state)
Georgia is a state located in the southeastern United States. It was established in 1732, the last of the original Thirteen Colonies. The state is named after King George II of Great Britain. Georgia was the fourth state to ratify the United States Constitution, on January 2, 1788...
, Mississippi
Mississippi
Mississippi is a U.S. state located in the Southern United States. Jackson is the state capital and largest city. The name of the state derives from the Mississippi River, which flows along its western boundary, whose name comes from the Ojibwe word misi-ziibi...
, South Carolina
South Carolina
South Carolina is a state in the Deep South of the United States that borders Georgia to the south, North Carolina to the north, and the Atlantic Ocean to the east. Originally part of the Province of Carolina, the Province of South Carolina was one of the 13 colonies that declared independence...
and Alabama
Alabama
Alabama is a state located in the southeastern region of the United States. It is bordered by Tennessee to the north, Georgia to the east, Florida and the Gulf of Mexico to the south, and Mississippi to the west. Alabama ranks 30th in total land area and ranks second in the size of its inland...
. It is one of the most cold-hardy palms
Hardy palms
Hardy palms are any of the species of palm that are able to withstand colder temperatures and thrive in places not typically considered in the natural range for palms. Several are native to higher elevations in Asia and can tolerate hard freezes with little or no damage...
in the world.

The Needle Palm assumes a shrublike clumping form with several stems growing from a single base, the stems growing very slowly and tightly together, eventually forming a dense base 1–1.2 m (3.3–3.9 ft) tall, with numerous sharp needle-like spines produced between the leaves; these are 10–25 cm (3.9–9.8 in) long and protect the stem growing point from browsing animals. The whole plant can reach 2–3 m (6.6–9.8 ft) tall to the top of the erect central leaves. It is a fan palm (Arecaceae tribe Corypheae), with the leaves
Leaf
A leaf is an organ of a vascular plant, as defined in botanical terms, and in particular in plant morphology. Foliage is a mass noun that refers to leaves as a feature of plants....
with a long petiole
Petiole (botany)
In botany, the petiole is the stalk attaching the leaf blade to the stem. The petiole usually has the same internal structure as the stem. Outgrowths appearing on each side of the petiole are called stipules. Leaves lacking a petiole are called sessile, or clasping when they partly surround the...
terminating in a rounded fan of 8–16 leaflets; each leaf is up to 2 m (6.6 ft) long, with the leaflets up to 60–80 cm (23.6–31.5 in) long. The flower
Flower
A flower, sometimes known as a bloom or blossom, is the reproductive structure found in flowering plants . The biological function of a flower is to effect reproduction, usually by providing a mechanism for the union of sperm with eggs...
s are borne in dense, short clusters at the top of the stems; it is usually dioecious
Plant sexuality
Plant sexuality covers the wide variety of sexual reproduction systems found across the plant kingdom. This article describes morphological aspects of sexual reproduction of plants....
with male and female flowers on separate plants. The fruit
Fruit
In broad terms, a fruit is a structure of a plant that contains its seeds.The term has different meanings dependent on context. In non-technical usage, such as food preparation, fruit normally means the fleshy seed-associated structures of certain plants that are sweet and edible in the raw state,...
is a brown drupe
Drupe
In botany, a drupe is a fruit in which an outer fleshy part surrounds a shell of hardened endocarp with a seed inside. These fruits develop from a single carpel, and mostly from flowers with superior ovaries...
about 2 cm (0.78740157480315 in) long.

The scientific name Rhapidophyllum means "needle-leaf", while hystrix
Hystrix
Hystrix is a genus of porcupine that contains what are the best known and most distinctive of the Old World porcupines.-Species:*Genus Hystrix**Subgenus Thecurus***Hystrix crassispinis - Thick-spined Porcupine...
is from the scientific name of a genus of porcupine
Porcupine
Porcupines are rodents with a coat of sharp spines, or quills, that defend or camouflage them from predators. They are indigenous to the Americas, southern Asia, and Africa. Porcupines are the third largest of the rodents, behind the capybara and the beaver. Most porcupines are about long, with...
s. The English name likewise refers to the needle-like spines produced at the petiole bases; for similar reasons, it is also occasionally called "porcupine palm". 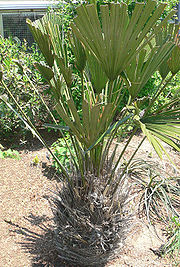 The Needle Palm is very popular among palm enthusiasts in temperate climates for its extraordinary ability to tolerate cold. Some reports have claimed survival of temperatures as low as −29°C, although more realistic estimates are approximately −15° to −21°C. A large, well-established specimen has been growing without protection at the United States National Arboretum
United States National Arboretum
The United States National Arboretum is an arboretum in Washington, D.C., operated by the United States Department of Agriculture's Agricultural Research Service as a division of the Henry A. Wallace Beltsville Agricultural Research Center...
in Washington, D. C. since the 1960s, a specimen at the Brooklyn Botanic Gardens has been flourishing for years, and there are several specimens thriving in the Greater Cincinnati area where extensive published research has been led by Miami University
Miami University
Miami University is a coeducational public research university located in Oxford, Ohio, United States. Founded in 1809, it is the 10th oldest public university in the United States and the second oldest university in Ohio, founded four years after Ohio University. In its 2012 edition, U.S...
, Ohio. However, unlike the related Trachycarpus
Trachycarpus
Trachycarpus is a genus of ten species of palms native to Asia, from the Himalaya east to eastern China. They are fan palms , with the leaves with a bare petiole terminating in a rounded fan of numerous leaflets. The leaf bases produce persistent fibers that often give the trunk a characteristic...
species, Needle Palms need hot, humid summer temperatures to thrive and the species does not grow well in the Pacific Northwest
Pacific Northwest
The Pacific Northwest is a region in northwestern North America, bounded by the Pacific Ocean to the west and, loosely, by the Rocky Mountains on the east. Definitions of the region vary and there is no commonly agreed upon boundary, even among Pacific Northwesterners. A common concept of the...
. It is, however, becoming one of the most popular palms for planting in the Chesapeake Bay
Chesapeake Bay
The Chesapeake Bay is the largest estuary in the United States. It lies off the Atlantic Ocean, surrounded by Maryland and Virginia. The Chesapeake Bay's drainage basin covers in the District of Columbia and parts of six states: New York, Pennsylvania, Delaware, Maryland, Virginia, and West...
area of Maryland
Maryland
Maryland is a U.S. state located in the Mid Atlantic region of the United States, bordering Virginia, West Virginia, and the District of Columbia to its south and west; Pennsylvania to its north; and Delaware to its east...
and Virginia
Virginia
The Commonwealth of Virginia , is a U.S. state on the Atlantic Coast of the Southern United States. Virginia is nicknamed the "Old Dominion" and sometimes the "Mother of Presidents" after the eight U.S. presidents born there...
, as well as the Outer Banks
Outer Banks
The Outer Banks is a 200-mile long string of narrow barrier islands off the coast of North Carolina, beginning in the southeastern corner of Virginia Beach on the east coast of the United States....
of North Carolina
North Carolina
North Carolina is a state located in the southeastern United States. The state borders South Carolina and Georgia to the south, Tennessee to the west and Virginia to the north. North Carolina contains 100 counties. Its capital is Raleigh, and its largest city is Charlotte...
.
It grows far north as coastal parts of the New York area without protection, specifically Connecticut
Connecticut
Connecticut is a state in the New England region of the northeastern United States. It is bordered by Rhode Island to the east, Massachusetts to the north, and the state of New York to the west and the south .Connecticut is named for the Connecticut River, the major U.S. river that approximately...
(see range map), and somewhat farther north (New England
New England
New England is a region in the northeastern corner of the United States consisting of the six states of Maine, New Hampshire, Vermont, Massachusetts, Rhode Island, and Connecticut...
) with protection.

The Needle Palm is considered to be commercially exploited and therefore threatened
Threatened species
Threatened species are any speciesg animals, plants, fungi, etc.) which are vulnerable to endangerment in the near future.The World Conservation Union is the foremost authority on threatened species, and treats threatened species not as a single category, but as a group of three categories,...
. When purchasing this palm, it is wise to purchase it only from a reputable dealer, as some unscrupulous dealers harvest them directly from the wild. 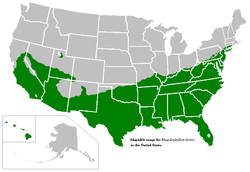