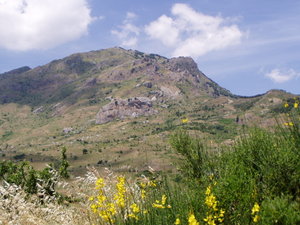 The Madonie are one of the principal mountain groups in Sicily
Sicily
Sicily is a region of Italy, and is the largest island in the Mediterranean Sea. Along with the surrounding minor islands, it constitutes an autonomous region of Italy, the Regione Autonoma Siciliana Sicily has a rich and unique culture, especially with regard to the arts, music, literature,...
, southern Italy
Italy
Italy , officially the Italian Republic languages]] under the European Charter for Regional or Minority Languages. In each of these, Italy's official name is as follows:;;;;;;;;), is a unitary parliamentary republic in South-Central Europe. To the north it borders France, Switzerland, Austria and...
, part of the Sicilian portion of the Apennines. It is located in Palermo Province. Apart from Mount Etna
Mount Etna
Mount Etna is an active stratovolcano on the east coast of Sicily, close to Messina and Catania. It is the tallest active volcano in Europe, currently standing high, though this varies with summit eruptions; the mountain is 21 m higher than it was in 1981.. It is the highest mountain in...
, it includes the highest elevations in Sicily: the highest peak of the range is the Pizzo Carbonara
Pizzo Carbonara
Pizzo Carbonara is the highest peak of the Madonie mountains in Sicily. It is the second highest peak in Sicily, only Mount Etna being higher, although it is only 2m higher than the neighbouring Pizzo Antenna....
(1,979 m), followed by closely neighbouring Pizzo Antenna (1,977 m).

The area and became famous for the Circuito Piccolo delle Madonie, where the Targa Florio
Targa Florio
The Targa Florio was an open road endurance automobile race held in the mountains of Sicily near Palermo. Founded in 1906, it was the oldest sports car racing event, part of the World Sportscar Championship between 1955 and 1973...
race was held form 1906 to 1977.

The mountains were safeguarded in 1989 by the formation of the Parco delle Madonie, a regional natural park. Within the park area there are outcrops of rocks which have been dated over a 200-million-year period and represent all aspects of the geology
Geology
Geology is the science comprising the study of solid Earth, the rocks of which it is composed, and the processes by which it evolves. Geology gives insight into the history of the Earth, as it provides the primary evidence for plate tectonics, the evolutionary history of life, and past climates...
of Sicily apart from the current volcanic activity. Madonie Geopark is a member of the European Geoparks Network
European Geoparks Network
The European Geoparks Network, often known as the EGN, is a trans-national partnership of Geoparks across Europe formed in 2000 to provide mutual support to established and prospective Geoparks across the continent...
and the UNESCO
UNESCO
The United Nations Educational, Scientific and Cultural Organization is a specialized agency of the United Nations...
Global Network of National Geoparks.

There is a wide range of fossil
Fossil
Fossils are the preserved remains or traces of animals , plants, and other organisms from the remote past...
s present within the mountains' rocks. Buildings made from these rocks in the Madonie towns often show visible fossils.
The source of this article is wikipedia, the free encyclopedia.  The text of this article is licensed under the GFDL.