Encyclopedia
The Neapolitan
Naples
Naples is a city in Southern Italy, situated on the country's west coast by the Gulf of Naples. Lying between two notable volcanic regions, Mount Vesuvius and the Phlegraean Fields, it is the capital of the region of Campania and of the province of Naples...
Mastiff, Italian Mastiff, (Mastino Napoletano in Italian
Italian language
Italian is a Romance language spoken mainly in Europe: Italy, Switzerland, San Marino, Vatican City, by minorities in Malta, Monaco, Croatia, Slovenia, France, Libya, Eritrea, and Somalia, and by immigrant communities in the Americas and Australia...
) is a large, ancient dog
Dog
The domestic dog is a domesticated form of the gray wolf, a member of the Canidae family of the order Carnivora. The term is used for both feral and pet varieties. The dog may have been the first animal to be domesticated, and has been the most widely kept working, hunting, and companion animal in...
breed
Dog breed
Dog breeds are groups of closely related and visibly similar domestic dogs, which are all of the subspecies Canis lupus familiaris, having characteristic traits that are selected and maintained by humans, bred from a known foundation stock....
. This massive breed is often used as a guard
Guard dog
A guard dog, an attack dog or watch dog is a dog used to guard against, and watch for, unwanted or unexpected people or animals. The dog is discriminating so that it does not annoy or attack familiar people.-Barking:...
and defender of family and property due to their protective instincts and their fearsome appearance. 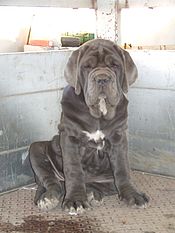 According to American Kennel Club
American Kennel Club
The American Kennel Club is a registry of purebred dog pedigrees in the United States. Beyond maintaining its pedigree registry, this kennel club also promotes and sanctions events for purebred dogs, including the Westminster Kennel Club Dog Show, an annual event which predates the official...
(AKC) standards, male Neapolitan Mastiffs should measure 26–31 inch
Inch
An inch is the name of a unit of length in a number of different systems, including Imperial units, and United States customary units. There are 36 inches in a yard and 12 inches in a foot...
es (66–79 cm
Centimetre
A centimetre is a unit of length in the metric system, equal to one hundredth of a metre, which is the SI base unit of length. Centi is the SI prefix for a factor of . Hence a centimetre can be written as or — meaning or respectively...
) at the withers
Withers
The withers is the ridge between the shoulder blades of a four-legged animal. In many species it is the tallest point of the body, and in horses and dogs it is the standard place to measure the animal's height .-Horses:The withers in horses are formed by the dorsal spinal processes of roughly the...
, weigh 130–155 pound
Pound (mass)
The pound or pound-mass is a unit of mass used in the Imperial, United States customary and other systems of measurement...
s (60-70 kg
Kilogram
The kilogram or kilogramme , also known as the kilo, is the base unit of mass in the International System of Units and is defined as being equal to the mass of the International Prototype Kilogram , which is almost exactly equal to the mass of one liter of water...
), while females should measure 24–29 inches (61–74 cm) and weigh 110–130 pounds (50–60 kg). Body length should be 10–15% greater than height.

The Neapolitan Mastiff is fearless and extremely protective of its home and family. They prefer to be with their family and to remain in and around the home at all times. The Neapolitan Mastiff rarely barks unless under provocation, renowned for sneaking up on intruders as opposed to first alerting them of their presence.

Neopolitan Mastiffs, as a breed, are extremely intelligent dogs with a tendency to be independent thinkers. They learn quickly, which is both good and bad, since this guardian breed needs extensive proper socialization to learn to accept strangers, especially within the home; without proper early socialization and training, these dogs are likely to become aggressive towards strangers and unfamiliar dogs. Like with other breeds, forceful training methods, "alpha roles", and a general "dominance" mentality will not work with these dogs, especially since it is difficult to try to physically dominate a dog that is nearly as large as an adult human; if you want a well mannered dog, prevent problems before they happen by using positive training methods, beginning socializing early, and continuing socializing throughout life.

The Neapolitan Mastiff is not a breed for most people, and certainly not a dog for beginners. Neapolitans must be well socialized with people, especially children, as Neos are large, powerful dogs and do not always know their own strength. Additionally, young children have young friends, and even with extensive socialization and training, Neapolitans will be wary of strangers and protective of their family, which can be disastrous for small children.

Additional protection training is unnecessary because they are natural guard dogs and always have been. As with every breed, obedience training
Obedience training
Obedience training usually refers to the training of a dog and the term is most commonly used in that context. Obedience training ranges from very basic training, such as teaching the dog to reliably respond to basic commands such as "sit", "down", "come", and "stay", to high level competition...
is very important. The Mastino is very tolerant of pain due to the breed's early fighting background and the fact the skin is loose on the body, so it is important to routinely check for health problems, as a Neo may not behave differently when injured or ill. They also are renowned for drooling especially after drinking or if they get excited. Their temperament and protective instincts are noticeably sharper as compared to allied "heavy molosser" breeds such as the Dogue de Bordeaux, the English Mastiff, the Mastín Españ̃ol etc. and therefore they have been used as a breed component in the development of many modern protection breeds such as the Swinford Bandog
Swinford Bandog
-History:The name "Bandog" has been around for many centuries and was a term used to describe a type of guard dog; however, the popularity of the "Bandog" name was revived in the mid 1960's by veterinarian John B. Swinford. Dr...
(also known as the American Bandog Mastiff) and others. This breed is not particularly dog-aggressive, but males are known to be very dominant and, at times, confrontational. 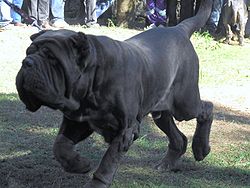 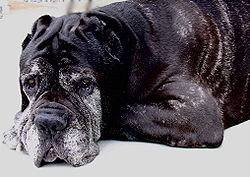 The Neo has some specific health concerns. The most common is Cherry eye
Cherry eye
Cherry eye is the term used to refer to canine nictitans gland prolapse, a common congenital eye defect in various dog breeds where the gland of the third eyelid known as the nictitating membrane prolapses and becomes visible. Commonly affected breeds include the Bulldog, Chihuahua, Cocker...
.
Others include:


Additionally, Neos do not do well in hot weather, and are prone to heatstroke
Hyperthermia
Hyperthermia is an elevated body temperature due to failed thermoregulation. Hyperthermia occurs when the body produces or absorbs more heat than it can dissipate...
. Like most giant breeds, the Neapolitan Mastiff is not particularly long-lived, averaging 7 to 9 years, however, with a proper biologically appropriate diet, safe exercise, and proper weight maintenance, there is no reason that the average Neo cannot live beyond that. 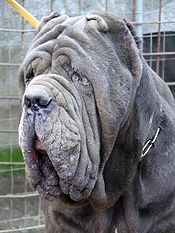 When it comes to exercise, Neapolitans are not a very active breed as their energy tends to be short lived and their weight causes stress to their joints when excessive. However, they can and will have short, extremely powerful bursts of energy.

The Neapolitan Mastiff is one of the Molosser
Molosser
Molosser is a category of large, solidly-built dog that includes several breeds, probably all descended from the same root stock. The name derives from Molossia, a subregion of ancient Epirus, ancient Greece, where the large shepherd dog was known as the Molossus.The proper noun "Mastiff", however,...
type of dogs, which probably descend from a common stock; whether this was the Molossus
Molossus (dog)
-History:This ancient extinct breed of dog is commonly considered to be the ancestor of today's Mastiff-type dogs and of many other modern breeds. Mastiff-type dogs are often referred to as Molossus dogs or Molossers...
attested in antiquity is controversial.

Despite centuries of popularity throughout Europe, this type of dog was almost lost after World War II. Soon after the war, Italian painter Piero Scanziani established a breeding kennel to turn the mastiff-type dogs of Italy into a formal breed which was then named the Neapolitan Mastiff and English Mastiff
English Mastiff
The English Mastiff, referred to by virtually all Kennel Clubs simply as the Mastiff, is a breed of large dog perhaps descended from the ancient Alaunt through the Pugnaces Britanniae. Distinguishable by enormous size, massive head, and a limited range of colors, but always displaying a black mask,...
was used to help in this process.
A Neapolitan Mastiff has set the record for giving birth to 24 puppies, although 4 of them didn't surive.


Neapolitan Mastiffs in the media