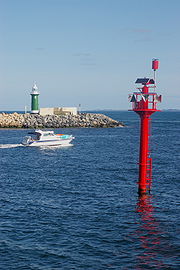 A body of water, such as a river
River
A river is a natural watercourse, usually freshwater, flowing towards an ocean, a lake, a sea, or another river. In a few cases, a river simply flows into the ground or dries up completely before reaching another body of water. Small rivers may also be called by several other names, including...
, canal
Canal
Canals are man-made channels for water. There are two types of canal:#Waterways: navigable transportation canals used for carrying ships and boats shipping goods and conveying people, further subdivided into two kinds:...
or lake
Lake
A lake is a body of relatively still fresh or salt water of considerable size, localized in a basin, that is surrounded by land. Lakes are inland and not part of the ocean and therefore are distinct from lagoons, and are larger and deeper than ponds. Lakes can be contrasted with rivers or streams,...
, is navigable if it is deep, wide and slow enough for a vessel
Ship
Since the end of the age of sail a ship has been any large buoyant marine vessel. Ships are generally distinguished from boats based on size and cargo or passenger capacity. Ships are used on lakes, seas, and rivers for a variety of activities, such as the transport of people or goods, fishing,...
to pass. Preferably there are few obstructions such as rocks or trees to avoid. Bridges must have sufficient clearance. High water speed may make a channel
Channel (geography)
In physical geography, a channel is the physical confine of a river, slough or ocean strait consisting of a bed and banks.A channel is also the natural or human-made deeper course through a reef, sand bar, bay, or any shallow body of water...
unnavigable. Waters may be unnavigable because of ice, particularly in winter. Navigability depends on context: A small river may be navigable by smaller craft, such as a motor boat or a kayak
Kayak
A kayak is a small, relatively narrow, human-powered boat primarily designed to be manually propelled by means of a double blade paddle.The traditional kayak has a covered deck and one or more cockpits, each seating one paddler...
, but unnavigable by a cruise ship. Shallow rivers may be made navigable by the installation of locks that increase and regulate water depth, or by dredging.

What constitutes 'navigable' waters can not be separated from the context in which the question is asked. Numerous federal, and some states, define navigability for various purposes from admiralty jurisdiction to pollution control,and from property boundaries to the licencing of dams. The numerous definitions and jurisdictional statutes have created an array of case law specific to which context the question of navigability arises. Some of the most commonly discussed definitions are listed here.

Navigable waters of the United States, as defined in 33 CFR 329, are those waters that are subject to the ebb and flow of the tide and/or are presently used, or have been used in the past, or may be susceptible for use to transport interstate or foreign commerce while the waterway is in its ordinary condition. Section 10 of the Rivers and Harbors Act of 1899
Rivers and Harbors Act of 1899
The Rivers and Harbors Appropriation Act of 1899 is the oldest federal environmental law in the United States. The Act makes it a misdemeanor to discharge refuse matter of any kind into the navigable waters, or tributaries thereof, of the United States without a permit; this specific provision is...
(33 U.S.C. 403), approved 3 March 1899, prohibits the unauthorized obstruction of a navigable water of the U.S. This statute also requires a permit from the U.S. Army Corps of Engineers for any construction in or over any navigable water, or the excavation or discharge of material into such water, or the accomplishment of any other work affecting the course, location, condition, or capacity of such waters.

In India there are currently three National Waterways totaling a distance of 2921 km. They are:


It is estimated that the total navigable length of inland waterways is 14500 km. A total of 16 million tonnes of freight is moved by this mode of transport.

Waterways provide enormous advantages as a mode of transport compared to land and air modes of transports.