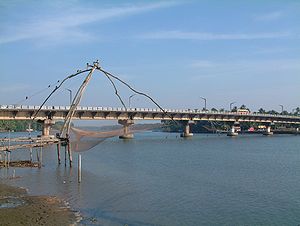 Kottapuram is a part of the Thrissur
Thrissur
This article is about the city in India. For the district, see Thrissur district. For the urban agglomeration area of Thrissur see Thrissur Metropolitan Area...
district and at the southernmost border of the Kodungallur
Kodungallur
Kodungallur is a municipality in Thrissur District, in the state of Kerala, India on the Malabar Coast. Kodungallur is located about 29 km northwest of Kochi city and 38 km Southwest of Thrissur, on National Highway 17 . Muziris the ancient seaport at the mouth of the Periyar River was...
municipality. The Roman Catholic Diocese of Kottapuram which is a suffragan of the Archdiocese of Verapoly, has its see here.

Kottapuram is one of the biggest vegetable markets in Kerala. It is located close to the town of Kodungallur
Kodungallur
Kodungallur is a municipality in Thrissur District, in the state of Kerala, India on the Malabar Coast. Kodungallur is located about 29 km northwest of Kochi city and 38 km Southwest of Thrissur, on National Highway 17 . Muziris the ancient seaport at the mouth of the Periyar River was...
. The Kollam-Kottapuram national waterway III ends at Kottapuram. It has been built near to the Kottapuram bridge.

In olden times cranganore was known as Muzaris.
Muzaris was the main port for entering to Kerala(known as vanchi) Thiruvanchikkulam was the capital of vanchi rajiam. It is near to Kottapuram Fort. AD 50's ST: Thomas(The appostale of christ)came here through this port.
The first Muslim Mosk build by Cheraman perumal by the request of Malic Dinar is located near the Fort.
Kottapuram is a common place name in the India
India
India , officially the Republic of India , is a country in South Asia. It is the seventh-largest country by geographical area, the second-most populous country with over 1.2 billion people, and the most populous democracy in the world...
n state of Kerala
Kerala
or Keralam is an Indian state located on the Malabar coast of south-west India. It was created on 1 November 1956 by the States Reorganisation Act by combining various Malayalam speaking regions....
. The word means 'the place around a Fort' (Kotta means Fort). Since there are many fortresses in Kerala, the state has many places with a similar name. This particular place gets its name from a fort constructed by Portuguese in 1503. only relics of the fort is seen as it was destroyed by Zamorin as well as Tipu sultan
Tipu Sultan
Tipu Sultan , also known as the Tiger of Mysore, was the de facto ruler of the Kingdom of Mysore. He was the son of Hyder Ali, at that time an officer in the Mysorean army, and his second wife, Fatima or Fakhr-un-Nissa...
. The fort is known as cranganore Fort
Cranganore Fort
Cranganore Fort, otherwise known as Kodungallur Fort, was built by the Portuguese in 1523 A.D. and was called Fortaleza da Sao Tome. The Dutch took possession of it in 1661 and later it came under the control of Tipu Sultan. The Dutch wrested it back from Tipu Sultan, but the fort eventually came...
. The fort is almost ruined now. 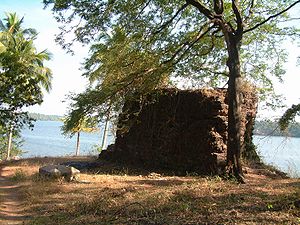 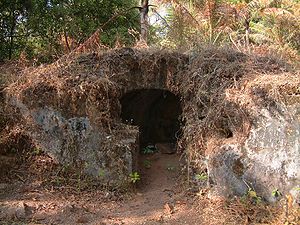 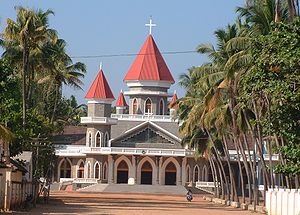