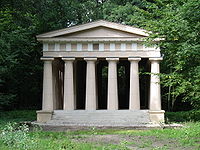 Natolin is a historic park
Park
A park is a protected area, in its natural or semi-natural state, or planted, and set aside for human recreation and enjoyment, or for the protection of wildlife or natural habitats. It may consist of rocks, soil, water, flora and fauna and grass areas. Many parks are legally protected by...
and nature reserve
Nature reserve
A nature reserve is a protected area of importance for wildlife, flora, fauna or features of geological or other special interest, which is reserved and managed for conservation and to provide special opportunities for study or research...
(1.2 km²) on the southern edge of Warsaw
Warsaw
Warsaw is the capital and largest city of Poland. It is located on the Vistula River, roughly from the Baltic Sea and from the Carpathian Mountains. Its population in 2010 was estimated at 1,716,855 residents with a greater metropolitan area of 2,631,902 residents, making Warsaw the 10th most...
, Poland
Poland
Poland , officially the Republic of Poland , is a country in Central Europe bordered by Germany to the west; the Czech Republic and Slovakia to the south; Ukraine, Belarus and Lithuania to the east; and the Baltic Sea and Kaliningrad Oblast, a Russian exclave, to the north...
. "Natolin" is also the name of a neighborhood located to the west of the park — a part of Warsaw's southernmost Ursynów
Ursynów
Ursynów is the southernmost district of Warsaw. With a surface area of 44.6 km², it is the third largest district in Warsaw, comprising 8.6 percent of the city. The district has a population of almost 148,000, and is one of the fastest growing neighborhoods in Warsaw...
district.
Since 1993 Natolin has been the site of one of two College of Europe
College of Europe
The College of Europe is an independent university institute of postgraduate European studies with the main campus in Bruges, Belgium...
campuses (College of Europe, Natolin).

The history of Natolin begins at end of the 17th century, when the King of Poland John III Sobieski
John III Sobieski
John III Sobieski was one of the most notable monarchs of the Polish–Lithuanian Commonwealth, from 1674 until his death King of Poland and Grand Duke of Lithuania. Sobieski's 22-year-reign was marked by a period of the Commonwealth's stabilization, much needed after the turmoil of the Deluge and...
started the construction of a royal zoological garden in the village of Natolin. It was a part of his royal residence of Wilanów
Wilanów
Wilanów is a district of the city of Warsaw, Poland. It is home to historic Wilanów Palace, the "Polish Versailles," and second home to various Polish kings.-History:...
and also served as a hunting lodge. In early 1730s his successor, King August II the Strong, reformed the garden into a pheasant
Pheasant
Pheasants refer to some members of the Phasianinae subfamily of Phasianidae in the order Galliformes.Pheasants are characterised by strong sexual dimorphism, males being highly ornate with bright colours and adornments such as wattles and long tails. Males are usually larger than females and have...
breeding and hunting area. The place was thus called Bażantarnia - Pheasantry. With time the former royal grounds were passed to the mighty Czartoryski
Czartoryski
Czartoryski is the surname of a Polish-Ukrainian-Lithuanian magnate family also known as the Familia. They used the Czartoryski Coat of arms and were the leading noble family of the Polish-Lithuanian Commonwealth in the 18th century.-History:The Czartoryski is a family of a Grand Ducal...
family. In 1780 Prince August Czartoryski
August Aleksander Czartoryski
Prince August Aleksander Czartoryski was a Polish-Lithuanian noble , magnate, and founder of the family fortune.August became Major-General of the Polish Army in 1729, voivode of the Ruthenian Voivodship in 1731, General Starost of Podolia in 1750–1758, and a Knight of Malta...
built on the spot his new summer residence. Located in dense forests on the escarpment of the Vistula
Vistula
The Vistula is the longest and the most important river in Poland, at 1,047 km in length. The watershed area of the Vistula is , of which lies within Poland ....
River, the new classicist
Classicism
Classicism, in the arts, refers generally to a high regard for classical antiquity, as setting standards for taste which the classicists seek to emulate. The art of classicism typically seeks to be formal and restrained: of the Discobolus Sir Kenneth Clark observed, "if we object to his restraint...
palace was designed by a renowned contemporary architect Szymon Bogumił Zug while the internal design was prepared by Vincenzo Brenna
Vincenzo Brenna
Vincenzo Brenna was an Italian architect and painter who was the house architect of Paul I of Russia. Brenna was hired by Paul and his spouse Maria Fyodorovna as interior decorator in 1781 and by the end of 1780s became the couple's leading architect...
. The palace featured a distinctive half-open salon, with a view on the forest below the escarpment. 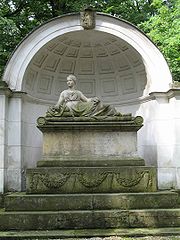 In late 18th century the Wilanów
Wilanów
Wilanów is a district of the city of Warsaw, Poland. It is home to historic Wilanów Palace, the "Polish Versailles," and second home to various Polish kings.-History:...
estate, including the grounds around the Pheasantry, passed on to son-in-law of Izabela Lubomirska, Stanisław Kostka Potocki. After the Partitions of Poland
Partitions of Poland
The Partitions of Poland or Partitions of the Polish–Lithuanian Commonwealth took place in the second half of the 18th century and ended the existence of the Polish–Lithuanian Commonwealth, resulting in the elimination of sovereign Poland for 123 years...
, in 1806, Potocki started an extensive modernization of the palace and the park. The Pheasantry was also renamed to its modern name of Natolin in honor of the Potocki's granddaughter, Natalia Potocka
Natalia Potocka
Natalia Potocka was a Polish noble lady.Natalia married Prince Roman Sanguszko on 14 May 1829 in Warsaw.-Further reading:* Potocka-Wąsowiczowa, Anna z Tyszkiewiczów. Wspomnienia naocznego świadka. Warszawa: Państwowy Instytut Wydawniczy, 1965....
(born 1807). The palace's reconstruction included rebuilding of the facade and the courtyard elevation, as well as notable changes in the internal design and decorations. The new design was created by another of Poland's notable architects of the epoch, Chrystian Piotr Aigner
Chrystian Piotr Aigner
Chrystian Piotr Aigner was a Polish architect and theoretician of architecture.-Life:...
, though some of the changes are attributed to Potocki himself.

The paintings inside the palace were replaced with stucco
Stucco
Stucco or render is a material made of an aggregate, a binder, and water. Stucco is applied wet and hardens to a very dense solid. It is used as decorative coating for walls and ceilings and as a sculptural and artistic material in architecture...
s by Wirgiliusz Bauman. Significant changes were also applied to the surrounding park, which was converted from a typical classicist French park into a picturesque and then-popular landscape park
Landscape park
Landscape park may refer to:* Landscape Park , a type of designated natural area in Poland* Landscape garden...
. The park was also extended to include some romantic
Romanticism
Romanticism was an artistic, literary and intellectual movement that originated in the second half of the 18th century in Europe, and gained strength in reaction to the Industrial Revolution...
buildings and sculptures such as the Holendernia built between 1812 and 1814 by Aigner or two guard houses, modelled after medieval castles, built in 1832. The palace itself was also extended to include buildings that made it a full-time residence rather than a summer resort. Among the buildings added were the stable
Stable
A stable is a building in which livestock, especially horses, are kept. It most commonly means a building that is divided into separate stalls for individual animals...
s, a residential annex and a coach house. A small Gothic revival chapel was also built opposite the Holendernia and a newly-built monument modelled after the so-called Neron
Neron
Neron is a fictional demon, a comic book character published by DC Comics. He first appeared in the DC Comics cross-over event Underworld Unleashed #1, , and was created by Mark Waid and Howard Porter.- Publication history :...
's Sarcophagus and Jean-Jacques Rousseau
Jean-Jacques Rousseau
Jean-Jacques Rousseau was a Genevan philosopher, writer, and composer of 18th-century Romanticism. His political philosophy influenced the French Revolution as well as the overall development of modern political, sociological and educational thought.His novel Émile: or, On Education is a treatise...
's tomb in Paris.

The Alexander Potocki's death ended the splendid period of developments of Natolin. The next administrators of estate, son August and the daughter-in-law Alexandra did not maintain the property so Natolin began to fall into decline. The palace and park were used only occasionally, mainly as temporary accommodation for owners' relatives. 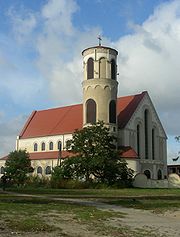 Until the 1980s Natolin and its neighbouring area Wolica, was a small village located right outside the city limits, with numerous orchards.
After that it was urbanized with large blocks of flats.
Now Natolin is a modern part of Warsaw with many shops, restaurants and houses.
There is also a metro station
Natolin (Warsaw Metro)
Metro Natolin is one of the Warsaw Metro stations, located at the junction of Al. KEN and Belgradzka. It is near Galeria Ursynów....
of the same name located in the middle of the district.