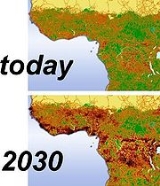 Overview
Habitat fragmentation as the name implies, describes the emergence of discontinuities (fragmentation) in an organism's preferred environment (habitat
Habitat (ecology)
A habitat is an ecological or environmental area that is inhabited by a particular species of animal, plant or other type of organism...
), causing population fragmentation
Population fragmentation
Population fragmentation is a form of population segregation. It is often caused by habitat fragmentation. Population fragmentation causes inbreeding depression, which leads to a decrease in genetic variability in the species involved. This decreases the fitness of the population for several reasons...
. Habitat fragmentation can be caused by geological processes that slowly alter the layout of the physical environment (suspected of being one of the major causes
Allopatric speciation
Allopatric speciation or geographic speciation is speciation that occurs when biological populations of the same species become isolated due to geographical changes such as mountain building or social changes such as emigration...
of speciation
Speciation
Speciation is the evolutionary process by which new biological species arise. The biologist Orator F. Cook seems to have been the first to coin the term 'speciation' for the splitting of lineages or 'cladogenesis,' as opposed to 'anagenesis' or 'phyletic evolution' occurring within lineages...
), or by human activity such as land conversion, which can alter the environment much faster and causes extinction
Extinction
In biology and ecology, extinction is the end of an organism or of a group of organisms , normally a species. The moment of extinction is generally considered to be the death of the last individual of the species, although the capacity to breed and recover may have been lost before this point...
s of many species.

The term habitat fragmentation includes five discrete phenomena:
Evidence of habitat destruction through natural processes such as volcanism, fire, and climate change is found in the fossil record.

Why is habitat fragmentation such a problem for species survival ?
More
x