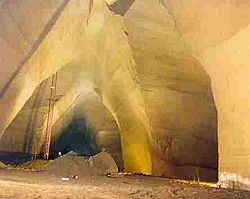 Running beneath the Italian city of Naples and the surrounding area is an underground geothermal zone called the "Campi Flegrei
Campi Flegrei
The Phlegraean Fields, also known as Campi Flegrei, , is a large wide caldera situated to the west of Naples, Italy. It was declared a regional park in 2003. Lying mostly underwater, the area comprises 24 craters and volcanic edifices. Hydrothermal activity can be observed at Lucrino, Agnano and...
" ("fiery fields"). This geothermal area runs generally from Mount Vesuvius
Mount Vesuvius
Mount Vesuvius is a stratovolcano in the Gulf of Naples, Italy, about east of Naples and a short distance from the shore. It is the only volcano on the European mainland to have erupted within the last hundred years, although it is not currently erupting...
beneath a wide area including Pompei
Pompei
Pompei is a city and comune in the province of Naples in Campania, southern Italy, famous for its ancient Roman ruins. As of 2010 its population was of 25,671.-History:...
, Herculaneum
Herculaneum
Herculaneum was an ancient Roman town destroyed by volcanic pyroclastic flows in AD 79, located in the territory of the current commune of Ercolano, in the Italian region of Campania in the shadow of Mt...
, Naples
Naples
Naples is a city in Southern Italy, situated on the country's west coast by the Gulf of Naples. Lying between two notable volcanic regions, Mount Vesuvius and the Phlegraean Fields, it is the capital of the region of Campania and of the province of Naples...
and over to Pozzuoli
Pozzuoli
Pozzuoli is a city and comune of the province of Naples, in the Italian region of Campania. It is the main city of the Phlegrean peninsula.-History:Pozzuoli began as the Greek colony of Dicaearchia...
and the coastal Baia
Baiae
Baiae , a frazione of the comune of Bacoli) in the Campania region of Italy was a Roman seaside resort on the Bay of Naples. It was said to have been named after Baius, who was supposedly buried there. Baiae was for several hundred years a fashionable resort, especially towards the end of the Roman...
area. Mining and various infrastructure projects during several millennia have formed extensive caves and underground structures in the zone.

Over millennia, extreme geothermal pressure has helped form a strong, durable tuffaceous volcanic sandstone
called tuff
Tuff
Tuff is a type of rock consisting of consolidated volcanic ash ejected from vents during a volcanic eruption. Tuff is sometimes called tufa, particularly when used as construction material, although tufa also refers to a quite different rock. Rock that contains greater than 50% tuff is considered...
, a rock composed of compressed and compacted volcanic ash ejected during a volcanic eruption. The entire Naples area is a geothermal region with deep veins of the tuff sandstone, generically referred to as "yellow tuff". It runs in deep veins beneath Naples and the area around it in strata which are found at different depths.

Tuff is strong and easily worked, making it an ideal building material. Tuff was mined through access and removal shafts called the occhio di monte, ("eye of the mountain"). Through these shaft, gigantic blocks of tuff were quarried and pulled up. The resulting void was a bottle shaped cavity with sloping shoulders, which provided ample reinforcement to prevent future cave-ins. After the tuff was quarried it was used as building material during roughly the Angevin
Capetian House of Anjou
The Capetian House of Anjou, also known as the House of Anjou-Sicily and House of Anjou-Naples, was a royal house and cadet branch of the direct House of Capet. Founded by Charles I of Sicily, a son of Louis VIII of France, the Capetian king first ruled the Kingdom of Sicily during the 13th century...
, Aragonese and Bourbon periods.

The resulting caverns were later used to form water reservoirs into which water was diverted from the main aqueducts, and the Ancient Greeks
Ancient Greece
Ancient Greece is a civilization belonging to a period of Greek history that lasted from the Archaic period of the 8th to 6th centuries BC to the end of antiquity. Immediately following this period was the beginning of the Early Middle Ages and the Byzantine era. Included in Ancient Greece is the...
dug long and elaborate aqueducts beneath the city more than 2,500 years ago. These provided fresh water to the villas and palaces above through use of the deep reservoirs and cisterns. Well shafts were also dug offering community access to the reservoirs below. 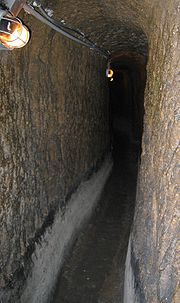 Over the centuries a massive honeycomb of caverns and passageways has been created beneath Naples and its environs. In World War II
World War II
World War II, or the Second World War , was a global conflict lasting from 1939 to 1945, involving most of the world's nations—including all of the great powers—eventually forming two opposing military alliances: the Allies and the Axis...
many of the quarry shafts were enlarged and spiralling stairways were added, opening up the caverns for use as air raid shelters.

The resulting cavities beneath the city can now be divided up
into several major categories:


Today, tours of the elaborate underground beneath Naples are available and there is even a museum of the underground located beneath Piazza Cavour in a huge quarry cavity with connecting tunnels and aqueduct passageways. It contains elaborate replicas of Greek hypogea and many ancient artifacts discovered during more than half a century of exploration.