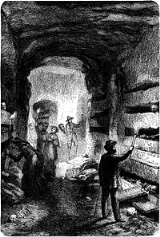 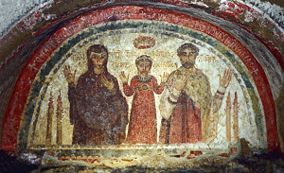 The Catacombs of San Gennaro are underground paleo-Christian burial sites in Naples
Naples
Naples is a city in Southern Italy, situated on the country's west coast by the Gulf of Naples. Lying between two notable volcanic regions, Mount Vesuvius and the Phlegraean Fields, it is the capital of the region of Campania and of the province of Naples...
, Italy
Italy
Italy , officially the Italian Republic languages]] under the European Charter for Regional or Minority Languages. In each of these, Italy's official name is as follows:;;;;;;;;), is a unitary parliamentary republic in South-Central Europe. To the north it borders France, Switzerland, Austria and...
. They are situated in the northern part of the city, on the slope leading up to Capodimonte. The site is now easily identified by the large church of Madre del Buon Consiglio
Madre del Buon Consiglio
The Madre del Buon Consiglio is a Roman Catholic church in Naples, southern Italy...
.

Originally, there were three separate cemeteries, dedicated, respectively, to Saint Gaudiosus (San Gaudioso), Saint Severus
Severus of Naples
Saint Severus was a bishop of Naples during the 4th and 5th centuries. He is considered the twelfth bishop of Naples, succeeding Maximus. His episcopate ran from February 363 to April 29, 409, the traditional date of his death...
(San Severo) and St. Januarius (San Gennaro). These catacombs
Catacombs
Catacombs, human-made subterranean passageways for religious practice. Any chamber used as a burial place can be described as a catacomb, although the word is most commonly associated with the Roman empire...
in Naples are different from their Roman counterparts in that they have more spacious passageways along two levels. The lower level is the oldest, going back to the 3rd-4th century and may actually be the site of an earlier pre-Christian cemetery later ceded to the new sect. It apparently became an important religious burial site only after the entombment there of Bishop Agrippinus
Agrippinus of Naples
Saint Agrippinus of Naples was a bishop of Naples and is venerated in that city as a saint. According to tradition, Agrippinus was the sixth bishop of Naples...
. The second level was the one expanded so as to encompass the other two adjacent cemeteries.

The foundation of San Gennaro extra Moenia
San Gennaro extra Moenia
San Gennaro extra Moenia is a church in Naples, Italy. It is located on the large road that leads up to the Capodimonte museum and is an example of so-called paleo-Christian architecture in the city....
is connected with the Catacombs of San Gennaro, the largest Christian catacomb complex in southern Italy. The first structure was probably the result of the fusion of two ancient burial sites, one from the 2nd century CE that contained the remains of Saint Agrippinus of Naples, the first patron saint
Patron saint
A patron saint is a saint who is regarded as the intercessor and advocate in heaven of a nation, place, craft, activity, class, clan, family, or person...
of Naples, and the site from the 4th century CE that contained the remains of St. Januarius, the patron saint of the city.

The site was consecrated to Gennaro (Januarius) in the fifth century on the occasion of the entombment there of his remains, which were later removed to the Cathedral of Naples
Cathedral of Naples
Naples Cathedral is a Roman Catholic cathedral, the main church of Naples, southern Italy, and the seat of the Archbishop of Naples. It is widely known as the Cattedrale di San Gennaro, in honour of Saint Januarius, the city's patron saint, but is actually dedicated to the Assumption of the...
. Until the eleventh century the catacombs were the burial site of Neapolitan bishops. Between the 13th and 18th century, they were the victim of severe looting. Restoration of the catacombs was made possible only after the transfer of skeletal remains to another cemetery.