Encyclopedia
Naknek Lake is a lake
Lake
A lake is a body of relatively still fresh or salt water of considerable size, localized in a basin, that is surrounded by land. Lakes are inland and not part of the ocean and therefore are distinct from lagoons, and are larger and deeper than ponds. Lakes can be contrasted with rivers or streams,...
in southern Alaska
Alaska
Alaska is the largest state in the United States by area. It is situated in the northwest extremity of the North American continent, with Canada to the east, the Arctic Ocean to the north, and the Pacific Ocean to the west and south, with Russia further west across the Bering Strait...
, near the base of the Alaska Peninsula
Alaska Peninsula
The Alaska Peninsula is a peninsula extending about to the southwest from the mainland of Alaska and ending in the Aleutian Islands. The peninsula separates the Pacific Ocean from Bristol Bay, an arm of the Bering Sea....
. The lake is 64 km (39.8 mi) long and 5–13 km (3–8 miles) wide. The lake drains west into Bristol Bay
Bristol Bay
Bristol Bay is the eastern-most arm of the Bering Sea, at 57° to 59° North 157° to 162° West in Southwest Alaska. Bristol Bay is 400 km long and 290 km, wide at its mouth...
through the Naknek River
Naknek River
Naknek River is a 56-km-long river in the Bristol Bay Borough in the U.S. state of Alaska. It flows westward from Naknek Lake, draining it into the Kvichak Bay arm of Bristol Bay...
. 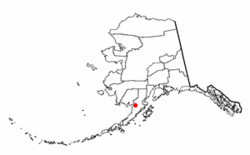 The earliest Russian explorer reported the lake's name as Naknek, but a later one said its name was "Akulogak". Ivan Petrof
Ivan Petrof (explorer)
Ivan Petrof was a soldier, writer, and translator who for many years was regarded a a major authority on Alaska. According to historian Terrence Cole, Petrof "holds the distinction of probably telling more lies about Alaska that were believed for more years than any other person in...
named the lake Lake Walker, for Francis Amasa Walker
Francis Amasa Walker
Francis Amasa Walker was an American economist, statistician, journalist, educator, academic administrator, and military officer in the Union Army. Walker was born into a prominent Boston family, the son of the economist and politician Amasa Walker, and he graduated from Amherst College at the age...
, Superintendent of the 1880 United States census.

The lake is famous for its sport fishing. Brooks Camp is located on the lake's shore; brown bear
Brown Bear
The brown bear is a large bear distributed across much of northern Eurasia and North America. It can weigh from and its largest subspecies, the Kodiak Bear, rivals the polar bear as the largest member of the bear family and as the largest land-based predator.There are several recognized...
s may be viewed catching salmon
Salmon
Salmon is the common name for several species of fish in the family Salmonidae. Several other fish in the same family are called trout; the difference is often said to be that salmon migrate and trout are resident, but this distinction does not strictly hold true...
while standing in a waterfall
Waterfall
A waterfall is a place where flowing water rapidly drops in elevation as it flows over a steep region or a cliff.-Formation:Waterfalls are commonly formed when a river is young. At these times the channel is often narrow and deep. When the river courses over resistant bedrock, erosion happens...
.
The source of this article is wikipedia, the free encyclopedia.  The text of this article is licensed under the GFDL.