Naknek River is a 56-km-long (35 mi) river
River
A river is a natural watercourse, usually freshwater, flowing towards an ocean, a lake, a sea, or another river. In a few cases, a river simply flows into the ground or dries up completely before reaching another body of water. Small rivers may also be called by several other names, including...
in the Bristol Bay Borough
Bristol Bay Borough, Alaska
As of the census of 2000, there were 1,258 people, 490 households, and 300 families residing in the borough. The population density was 2 people per square mile . There were 979 housing units at an average density of 2 per square mile...
in the U.S. state
U.S. state
A U.S. state is any one of the 50 federated states of the United States of America that share sovereignty with the federal government. Because of this shared sovereignty, an American is a citizen both of the federal entity and of his or her state of domicile. Four states use the official title of...
of Alaska
Alaska
Alaska is the largest state in the United States by area. It is situated in the northwest extremity of the North American continent, with Canada to the east, the Arctic Ocean to the north, and the Pacific Ocean to the west and south, with Russia further west across the Bering Strait...
. It flows westward from Naknek Lake
Naknek Lake
Naknek Lake is a lake in southern Alaska, near the base of the Alaska Peninsula. The lake is long and 5–13 km wide. The lake drains west into Bristol Bay through the Naknek River....
, draining it into the Kvichak Bay
Kvichak Bay
Kvichak Bay is an arm on the northeast side of Bristol Bay in southern Alaska, at . It is long and wide. The Kvichak River flows into the bay at its furthest northeast point, while the Naknek River comes in from the east about to the south of the Kvichak....
arm of Bristol Bay
Bristol Bay
Bristol Bay is the eastern-most arm of the Bering Sea, at 57° to 59° North 157° to 162° West in Southwest Alaska. Bristol Bay is 400 km long and 290 km, wide at its mouth...
. The river and lake are both known for their salmon
Salmon
Salmon is the common name for several species of fish in the family Salmonidae. Several other fish in the same family are called trout; the difference is often said to be that salmon migrate and trout are resident, but this distinction does not strictly hold true...
. 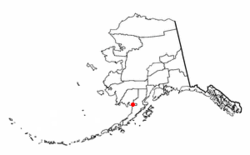