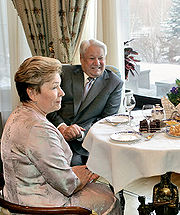 Naina Yeltsina was born in the Orenburg Oblast
Orenburg Oblast
Orenburg Oblast is a federal subject of Russia . Its administrative center is the city of Orenburg. From 1938 to 1957, it bore the name Chkalov Oblast in honor of Valery Chkalov...
in 1932. After graduating from the construction faculty at the Ural Polytechnic Institute
Ural State Technical University
Ural State Technical University is a higher education institute in Yekaterinburg, Sverdlovsk Oblast, Russian Federation. It is the biggest technical institution of higher education in Russia, with close ties to local industry in the Urals...
in Sverdlovsk
Yekaterinburg
Yekaterinburg is a major city in the central part of Russia, the administrative center of Sverdlovsk Oblast. Situated on the eastern side of the Ural mountain range, it is the main industrial and cultural center of the Urals Federal District with a population of 1,350,136 , making it Russia's...
in 1955, she worked with various projects at the Sverdlovsk Institute. In 1956 she married Boris Yeltsin
Boris Yeltsin
Boris Nikolayevich Yeltsin was the first President of the Russian Federation, serving from 1991 to 1999.Originally a supporter of Mikhail Gorbachev, Yeltsin emerged under the perestroika reforms as one of Gorbachev's most powerful political opponents. On 29 May 1990 he was elected the chairman of...
, whom she met at the institute, and lives, since 1985, in Moscow
Moscow
Moscow is the capital, the most populous city, and the most populous federal subject of Russia. The city is a major political, economic, cultural, scientific, religious, financial, educational, and transportation centre of Russia and the continent...
. They have two daughters, Yelena and Tatyana
Tatyana Dyachenko
Tatyana Borisovna Yumasheva is a daughter of former Russian President Boris Yeltsin. She was trained in computer science.She worked at the Salyut Design Bureau and later at Khrunichev State Research and Production Space Center until 1994....
, born in 1957 and 1960, respectively.

Naina Yeltsina was rarely seen in public. She accompanied her husband on some of his foreign visits, including 1997 visits to Sweden
Sweden
Sweden , officially the Kingdom of Sweden , is a Nordic country on the Scandinavian Peninsula in Northern Europe. Sweden borders with Norway and Finland and is connected to Denmark by a bridge-tunnel across the Öresund....
, Finland
Finland
Finland , officially the Republic of Finland, is a Nordic country situated in the Fennoscandian region of Northern Europe. It is bordered by Sweden in the west, Norway in the north and Russia in the east, while Estonia lies to its south across the Gulf of Finland.Around 5.4 million people reside...
, and a 1999 visit to China
China
Chinese civilization may refer to:* China for more general discussion of the country.* Chinese culture* Greater China, the transnational community of ethnic Chinese.* History of China* Sinosphere, the area historically affected by Chinese culture...
. As a rule, Naina Yeltsina never interfered in her husband's political work. However, in the 1996 election campaign, she met with voters and gave interviews to the media. A major public appearance was the state funeral
State funeral
A state funeral is a public funeral ceremony, observing the strict rules of protocol, held to honor heads of state or other important people of national significance. State funerals usually include much pomp and ceremony as well as religious overtones and distinctive elements of military tradition...
of her late husband in Moscow in April 2007.