Encyclopedia
Nahuel Huapi Lake is a lake
Lake
A lake is a body of relatively still fresh or salt water of considerable size, localized in a basin, that is surrounded by land. Lakes are inland and not part of the ocean and therefore are distinct from lagoons, and are larger and deeper than ponds. Lakes can be contrasted with rivers or streams,...
in the lake region of northern Patagonia
Patagonia
Patagonia is a region located in Argentina and Chile, integrating the southernmost section of the Andes mountains to the southwest towards the Pacific ocean and from the east of the cordillera to the valleys it follows south through Colorado River towards Carmen de Patagones in the Atlantic Ocean...
between the provinces of Río Negro
Río Negro Province
Río Negro is a province of Argentina, located at the northern edge of Patagonia. Neighboring provinces are from the south clockwise Chubut, Neuquén, Mendoza, La Pampa and Buenos Aires. To the east lies the Atlantic Ocean.Its capital is Viedma...
and Neuquén
Neuquén Province
Neuquén is a province of Argentina, located in the west of the country, at the northern end of Patagonia. It borders Mendoza Province to the north, Rio Negro Province to the southeast, and Chile to the west...
, in Argentina
Argentina
Argentina , officially the Argentine Republic , is the second largest country in South America by land area, after Brazil. It is constituted as a federation of 23 provinces and an autonomous city, Buenos Aires...
. The lake depression consists of several glacial valleys carved out along faults and Miocene
Miocene
The Miocene is a geological epoch of the Neogene Period and extends from about . The Miocene was named by Sir Charles Lyell. Its name comes from the Greek words and and means "less recent" because it has 18% fewer modern sea invertebrates than the Pliocene. The Miocene follows the Oligocene...
valleys that were later dammed by moraines.

Its seven branches are named Blest (36 km²), Huemul (21.5 km²), de la Tristeza (18.5 km²), Campanario (7.9 km²) , Machete, del Rincón and Última Esperanza. It is connected to other smaller lakes such as Gutiérrez
Gutiérrez Lake
Gutiérrez Lake is a lake of the lake region of northern Patagonia in the province of Río Negro, in Argentina. It is of glacial origin, being a Moraine-dammed lake. The lake is connected to Nahuel Huapi Lake.It was named by explorer and naturalist Francisco P...
, Moreno, Espejo and Correntoso. The deep-blue waters hold a number of islands, most notably Isla Victoria with 31 km². The name of the lake derives from the toponymy of this island in Mapudungun
Mapudungun
The Mapuche language, Mapudungun is a language isolate spoken in south-central Chile and west central Argentina by the Mapuche people. It is also spelled Mapuzugun and sometimes called Mapudungu or Araucanian...
(Mapuche
Mapuche
The Mapuche are a group of indigenous inhabitants of south-central Chile and southwestern Argentina. They constitute a wide-ranging ethnicity composed of various groups who shared a common social, religious and economic structure, as well as a common linguistic heritage. Their influence extended...
language): "Island of the Jaguar (or Puma)", from nahuel, "puma (or jaguar)", and huapí, "island". There is, however, more to the word "Nahuel" - it signifies "a man who by sorcery
Sorcery
Sorcery may refer to:* Magic * Maleficium * Witchcraft* Sorcery , a video game for the PlayStation 3 utilizing the PlayStation Move* Sorcery , 1995* Sorcery , 1974...
has been transformed to a puma" (or jaguar).

This breathtaking lake harbors several species of trout including rainbow trout
Rainbow trout
The rainbow trout is a species of salmonid native to tributaries of the Pacific Ocean in Asia and North America. The steelhead is a sea run rainbow trout usually returning to freshwater to spawn after 2 to 3 years at sea. In other words, rainbow trout and steelhead trout are the same species....
, brown trout
Brown trout
The brown trout and the sea trout are fish of the same species....
and brook trout
Brook trout
The brook trout, Salvelinus fontinalis, is a species of fish in the salmon family of order Salmoniformes. In many parts of its range, it is known as the speckled trout or squaretail. A potamodromous population in Lake Superior are known as coaster trout or, simply, as coasters...
which attract anglers from the world over. http://www.bariloche.org/paginas/2007/02/27/la_fauna_del_parque_nacional_nahuel_huapi/

A curious fact about the lake is that, despite being nowhere near any ocean and being at high altitude, it is also home for Kelp Gull
Kelp Gull
The Kelp Gull , also known as the Dominican Gull, breeds on coasts and islands through much of the southern hemisphere. The race L. d. vetula occurs around southern Africa, and nominate L. d...
and the Blue Eyed Cormorant
Cormorant
The bird family Phalacrocoracidae is represented by some 40 species of cormorants and shags. Several different classifications of the family have been proposed recently, and the number of genera is disputed.- Names :...
(Phalacrocorax atriceps), otherwise strictly marine birds. http://www.birdsoman.com/Birds/017-Cormorants/BlueeyedCormorant/BlueeyedCormorant.htm http://www.ripioturismo.com.ar/np-nh.htm http://links.jstor.org/sici?sici=0010-5422(198608)88%3A3%3C393%3AROCPOJ%3E2.0.CO%3B2-W

The lake’s crystal clear waters are very susceptible to climate changes and have an average surface temperature of 45 °F (7 °C), this makes it both beautiful and treacherous. Hypothermia
Hypothermia
Hypothermia is a condition in which core temperature drops below the required temperature for normal metabolism and body functions which is defined as . Body temperature is usually maintained near a constant level of through biologic homeostasis or thermoregulation...
is one of the risks bathers must undertake. Kayaking
Kayaking
Kayaking is the use of a kayak for moving across water. Kayaking and canoeing are also known as paddling. Kayaking is distinguished from canoeing by the sitting position of the paddler and the number of blades on the paddle...
is a popular sport on this and adjacent lakes.
The lake is also the starting point of the Limay River
Limay River
The Limay River is an important river in the northwestern Argentine Patagonia . It is born at the eastern end of the Nahuel Huapi Lake and flows in a meandering path for about 380 km, collecting the waters of several tributaries, such as the Traful, the Pichileufú and the Collón Curá. It then meets...
. 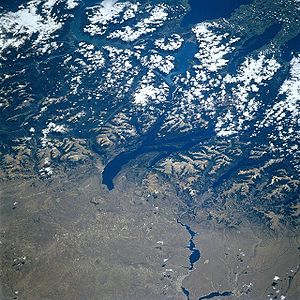 At the beginning of the 20th century, and following an old aboriginal legend, the rumor of a giant creature living in the deep waters of the lake took up. The creature is known locally as Nahuelito
Nahuelito
Nahuelito is a lake monster reported to live in Nahuel Huapi Lake, Patagonia, Argentina. Like Nessie, the Loch Ness Monster, the Argentine creature is named after the lake she resides in and has been described as a giant serpent or a huge hump, as well as a plesiosaur...
. Reported sightings of it predate Nessie
NESSIE
NESSIE was a European research project funded from 2000–2003 to identify secure cryptographic primitives. The project was comparable to the NIST AES process and the Japanese Government-sponsored CRYPTREC project, but with notable differences from both...
and The Lost World (Arthur Conan Doyle)
The Lost World (Arthur Conan Doyle)
The Lost World is a novel released in 1912 by Sir Arthur Conan Doyle concerning an expedition to a plateau in the Amazon basin of South America where prehistoric animals still survive. It was originally published serially in the popular Strand Magazine during the months of April 1912-November 1912...
. http://www.strangemag.com/nahuelito.html

Local aborigines (Mapuche
Mapuche
The Mapuche are a group of indigenous inhabitants of south-central Chile and southwestern Argentina. They constitute a wide-ranging ethnicity composed of various groups who shared a common social, religious and economic structure, as well as a common linguistic heritage. Their influence extended...
) called another creature el Cuero (leather) for its smooth skin. The neighboring lake Lago Lácar, has also been the site for accounts of another creature, more consistent with a plesiosaur
Plesiosaur
Plesiosauroidea is an extinct clade of carnivorous plesiosaur marine reptiles. Plesiosauroids, are known from the Jurassic and Cretaceous Periods...
, with aborigines describing it as a sea-cow with teeth all around it.