Encyclopedia
Nackenheim is an Ortsgemeinde – a municipality
Municipalities of Germany
Municipalities are the lowest level of territorial division in Germany. This may be the fourth level of territorial division in Germany, apart from those states which include Regierungsbezirke , where municipalities then become the fifth level.-Overview:With more than 3,400,000 inhabitants, the...
belonging to a Verbandsgemeinde
Verbandsgemeinde
A Verbandsgemeinde is an administrative unit in the German Bundesländer of Rhineland-Palatinate and Saxony-Anhalt.-Rhineland-Palatinate:...
, a kind of collective municipality – and a winegrowing centre in the Mainz-Bingen
Mainz-Bingen
Mainz-Bingen is a district in the east of Rhineland-Palatinate, Germany. Neighboring districts are Rheingau-Taunus, the district-free cities Wiesbaden and Mainz, the districts Groß-Gerau, Alzey-Worms, Bad Kreuznach, Rhein-Hunsrück.-History:During the French occupation under Napoleon the district...
district in Rhineland-Palatinate
Rhineland-Palatinate
Rhineland-Palatinate is one of the 16 states of the Federal Republic of Germany. It has an area of and about four million inhabitants. The capital is Mainz. English speakers also commonly refer to the state by its German name, Rheinland-Pfalz ....
, Germany
Germany
Germany , officially the Federal Republic of Germany , is a federal parliamentary republic in Europe. The country consists of 16 states while the capital and largest city is Berlin. Germany covers an area of 357,021 km2 and has a largely temperate seasonal climate...
.

Nackenheim lies in Rhenish Hesse near Mainz
Mainz
Mainz under the Holy Roman Empire, and previously was a Roman fort city which commanded the west bank of the Rhine and formed part of the northernmost frontier of the Roman Empire...
. It belongs to the Verbandsgemeinde of Bodenheim
Bodenheim (Verbandsgemeinde)
Bodenheim is a Verbandsgemeinde in the district Mainz-Bingen in Rhineland-Palatinate, Germany. The seat of the Verbandsgemeinde is in Bodenheim....
, whose seat is in the like-named municipality
Bodenheim
Bodenheim is a state-recognized tourism municipality in the Mainz-Bingen district in Rhineland-Palatinate, Germany-Location:...
, and is the only Ortsgemeinde in this Verbandsgemeinde that lies right on the Rhine. It is a municipality idyllically set between hillside vineyards on the one side and the Rhine on the other, whose vineyards were first mentioned more than 1,200 years ago. The islands of Kisselwörth (35 ha) and Sändchen cut Nackenheim off from the Rhine’s mainstream. The two islands have conservation status and belong to the Rheinauen (“Rhine Floodplains”) Habitats Directive area. Formerly, the area was under cultuvation, but nowadays, meadow orchards (Streuobstwiesen) are found there. In the course of the Rhine straightening project in the 19th century, Kisselwörth and Sändchen were enlarged with landfill and current control works .

The actual derivation of the name Nackenheim is not known. One supposition holds that the name goes back to prehistoric Nackenheim and a chieftain named Nacho, yielding a name meaning “Nacho’s Home”. Another explanation that has developed in the course of history according to which the name derives from the place’s location in the “neck of the mountain” (in German
German language
German is a West Germanic language, related to and classified alongside English and Dutch. With an estimated 90 – 98 million native speakers, German is one of the world's major languages and is the most widely-spoken first language in the European Union....
: im Nacken des Berges). Thus far, neither theory has been confirmed.

The council is made up of 22 council members, counting the parttime mayor, with seats apportioned thus:
(as at municipal election held on 7 June 2009)

The municipality’s arms
Coat of arms
A coat of arms is a unique heraldic design on a shield or escutcheon or on a surcoat or tabard used to cover and protect armour and to identify the wearer. Thus the term is often stated as "coat-armour", because it was anciently displayed on the front of a coat of cloth...
might be described thus: A bar argent, in chief sable an orb of the first, in base a wheel spoked of six of the first.

In an expert’s report from 25 May 1984, Chief Archivist Dr. Debus from the Speyer State Archive (Landesarchiv Speyer) made the following remarks:

“Above the Nackenheim Town Hall entrance is found an arms stone, which deviates from the arms in question on the following points: Instead of the cross, a hook with a pointed angle adorns the globus cruciger, and the wheel is eight-spoked. … The keystone above the Town Hall entrance yields, surely in unwitting transformation, the always six-spoked Wheel of Mainz
Wheel of Mainz
thumb|150px|version until 1992thumb|150px|version from 1992 - 2008thumb|150px|version from 2008The Wheel of Mainz or Mainzer Rad, in German, was the coat of arms of the Archbishopric of Mainz and thus also of the Electorate of Mainz , in Rhineland-Palatinate, Germany. It consists of a silver wheel...
, for it could only be this, with eight spokes. As to the other, the meaning of the Imperial apple (Reichsapfel – the globus cruciger) was unclear. Demandt-Renkhoff (Hessisches Ortswappenbuch, 1956, S. 124 f) state that the Wheel of Mainz originally replaced seal representations of Saint Stephen’s stoning – a reference to Saint Stephen’s Monastery in Mainz as patronage lords of Nackenheim’s Saint Gereon’s Church. Likewise, the municipal sign with Stephen’s stoning in it, which at first looked more like a Sester, underwent a gradual shift to a globus cruciger, which is why this form is used in the current municipal arms. The colours black and red, suggested by Demandt-Renkhoff and now also widespread, were retained, but on heraldic grounds and following the keystone already named several times furnished with a stripe, whose silver colour together with the red in the lower half of the escutcheon refers to Electoral Mainz
Archbishopric of Mainz
The Archbishopric of Mainz or Electorate of Mainz was an influential ecclesiastic and secular prince-bishopric in the Holy Roman Empire between 780–82 and 1802. In the Roman Catholic Church hierarchy, the Archbishop of Mainz was the primas Germaniae, the substitute of the Pope north of the Alps...
.

“The arms are historically well founded and heraldically flawless; their approval is recommended.”

Pommard
Pommard
Pommard is a commune in the Côte-d'Or department in Bourgogne in eastern France.It is famous for its Côte de Beaune wine production. This beautiful village is situated directly south of Beaune along the Route des Grands Crus...
, Côte-d'Or
Côte-d'Or
Côte-d'Or is a department in the eastern part of France.- History :Côte-d'Or is one of the original 83 departments created during the French Revolution on 4 March 1790. It was formed from part of the former province of Burgundy.- Geography :...
, France
France
The French Republic , The French Republic , The French Republic , (commonly known as France , is a unitary semi-presidential republic in Western Europe with several overseas territories and islands located on other continents and in the Indian, Pacific, and Atlantic oceans. Metropolitan France...

The partnership is represented at the yearly wine festival by a wine stand.

Into the 15th century, the village court’s and the local administration’s official business was being done outdoors under a tree on the lordly estate of Saint Stephen’s Monastery, which held the local lordship.

In the 16th century, a town hall was built on the monastery land, before which hereditary homage for the new local lord, the Elector of Mainz, was paid in 1616 by the inhabitants of the “market town (Flecken) of Nackenheim”.

This old town hall had to give way in 1751 to a new timber-frame
Timber framing
Timber framing , or half-timbering, also called in North America "post-and-beam" construction, is the method of creating structures using heavy squared off and carefully fitted and joined timbers with joints secured by large wooden pegs . It is commonplace in large barns...
building. The upper floors housed a room for the local court and a consulting room. On the ground floor was found a firefighting equipment room with the leather fire-quenching pails and the calibration master’s equipment. His job was to measure the wine casks and certify with a brand stamp that they were calibrated. Moreover, there was a holding cell, locally called the Kittje, where wrongdoers were kept for short periods of time.

Serving as the first Schultheiß
Schultheiß
In medieval Germany, the Schultheiß was the head of a municipality , a Vogt or an executive official of the ruler.As official it was...
at the new town hall was Paul Kertz (1749–1763). In 1792, after the French Revolution
French Revolution
The French Revolution , sometimes distinguished as the 'Great French Revolution' , was a period of radical social and political upheaval in France and Europe. The absolute monarchy that had ruled France for centuries collapsed in three years...
ary army had marched in, a commander’s office under Civil General Daniel Stamm moved in. In 1793, the citizenry elected, instead of the Schultheiß Johannes Herd the local clergyman Dr. Karl Melchior Arand as maire. During the short occupation in 1796, the French
France
The French Republic , The French Republic , The French Republic , (commonly known as France , is a unitary semi-presidential republic in Western Europe with several overseas territories and islands located on other continents and in the Indian, Pacific, and Atlantic oceans. Metropolitan France...
installed Wilhelm Jans as agent municipal. Beginning in 1797, when Nackenheim would belong to France for 17 years, only an adjunct was in office at town hall; the maire sat in Bodenheim. This double-municipality administrative arrangement was kept by the Grand Duchy of Hesse
Grand Duchy of Hesse
The Grand Duchy of Hesse and by Rhine , or, between 1806 and 1816, Grand Duchy of Hesse —as it was also known after 1816—was a member state of the German Confederation from 1806, when the Landgraviate of Hesse-Darmstadt was elevated to a Grand Duchy, until 1918, when all the German...
beginning in 1816. The mayor of Bodenheim was also responsible for Nackenheim. In 1822, Nackenheim got an independent “Grand-Ducal Hessian Mayoralty” (Großherzogliche Hessische Bürgermeisterei) under mayor Johann Schneider (1822–1831).

Above the Town Hall entrance with its coat of arms and yeardate 1751 was a niche in which it is believed a statue of the local patron saint, Stephen
Saint Stephen
Saint Stephen The Protomartyr , the protomartyr of Christianity, is venerated as a saint in the Roman Catholic, Anglican, Lutheran, Oriental Orthodox and Eastern Orthodox Churches....
, once stood; since the French Revolution
French Revolution
The French Revolution , sometimes distinguished as the 'Great French Revolution' , was a period of radical social and political upheaval in France and Europe. The absolute monarchy that had ruled France for centuries collapsed in three years...
it had stood empty. Only in 1931 was a Madonna figure – “Mary Mother of Peace” – put there on council member Dr. Franz Usinger’s motion to give thanks for the freeing of the Rhineland by Allied troops. During the Third Reich
Nazi Germany
Nazi Germany , also known as the Third Reich , but officially called German Reich from 1933 to 1943 and Greater German Reich from 26 June 1943 onward, is the name commonly used to refer to the state of Germany from 1933 to 1945, when it was a totalitarian dictatorship ruled by...
, the figure had to be taken down until it could assume its place once again when the Second World War ended in 1945.

In 1935 the Town Hall was thoroughly converted. Among other things, the entrance was put in the middle, where it is today. Further renovations followed in 1950 and 1951 for the Town Hall’s 200th anniversary. The last overhauls came in 1962 and 1980.

In the framework of a review in November 1992, considerable damage to ceiling beams by brown rot was observed, which led in December 1992 to the first damage analysis, confirming this damage. Together with the municipality of Nackenheim, the historic preservation authorities and the assigned structural engineer, a far-reaching, extensive structural investigation was agreed upon with the goal of planning an overhaul for the Town Hall befitting a monument. This was also to include a building deformation survey. These important preliminary investigations had been and were necessary for a detailed tender to begin an overhaul whose cost could be calculated for the municipality. Work began in November 1994. It was an outstanding performance.

The Gunderloch Winery is a member of the Verband Deutscher Prädikats- und Qualitätsweingüter e.V. (VDP). 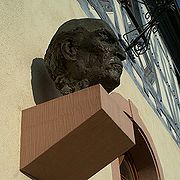 Famous people who have worked in the community