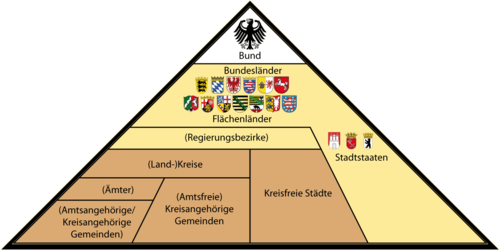 Municipalities
Municipality
A municipality is essentially an urban administrative division having corporate status and usually powers of self-government. It can also be used to mean the governing body of a municipality. A municipality is a general-purpose administrative subdivision, as opposed to a special-purpose district...
(Gemeinde
Gemeinde
Gemeinde is a German word for borough, commune, community, township, municipality, or in religious contexts, a parish or congregation ....
) are the lowest level of territorial division in Germany
Germany
Germany , officially the Federal Republic of Germany , is a federal parliamentary republic in Europe. The country consists of 16 states while the capital and largest city is Berlin. Germany covers an area of 357,021 km2 and has a largely temperate seasonal climate...
. This may be the fourth level of territorial division in Germany, apart from those states
States of Germany
Germany is made up of sixteen which are partly sovereign constituent states of the Federal Republic of Germany. Land literally translates as "country", and constitutionally speaking, they are constituent countries...
which include Regierungsbezirk
Regierungsbezirk
In Germany, a Government District, in German: Regierungsbezirk – is a subdivision of certain federal states .They are above the Kreise, Landkreise, and kreisfreie Städte...
e (singular: Regierungsbezirk), where municipalities then become the fifth level.

With more than 3,400,000 inhabitants, the most populated one is the city of Berlin
Berlin
Berlin is the capital city of Germany and is one of the 16 states of Germany. With a population of 3.45 million people, Berlin is Germany's largest city. It is the second most populous city proper and the seventh most populous urban area in the European Union...
; and the least populated is Wiedenborstel
Wiedenborstel
Wiedenborstel is a municipality in the district of Steinburg, in Schleswig-Holstein, Germany.-Geography:The village is located approximately 12 km north of Kellinghusen, and 10 km west of Neumünster, in the center of Naturpark Aukrug.-Demography:...
(8 inhabitants in 2010), in Schleswig-Holstein
Schleswig-Holstein
Schleswig-Holstein is the northernmost of the sixteen states of Germany, comprising most of the historical duchy of Holstein and the southern part of the former Duchy of Schleswig...