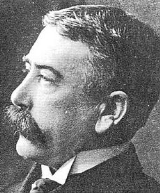 Overview
Ferdinand de Saussure was a Swiss linguist whose ideas laid a foundation for many significant developments in linguistics
Linguistics
Linguistics is the scientific study of human language. Linguistics can be broadly broken into three categories or subfields of study: language form, language meaning, and language in context....
in the 20th century. He is widely considered one of the fathers of 20th-century linguistics. However, most modern linguists and philosophers of language consider his ideas outdated.While Saussure's concepts—particularly semiotics
Semiotics
Semiotics, also called semiotic studies or semiology, is the study of signs and sign processes , indication, designation, likeness, analogy, metaphor, symbolism, signification, and communication...
—have received little to no attention in modern linguistic textbooks, his ideas have significantly influenced the humanities
Humanities
The humanities are academic disciplines that study the human condition, using methods that are primarily analytical, critical, or speculative, as distinguished from the mainly empirical approaches of the natural sciences....
and social sciences
Social sciences
Social science is the field of study concerned with society. "Social science" is commonly used as an umbrella term to refer to a plurality of fields outside of the natural sciences usually exclusive of the administrative or managerial sciences...
.
Ferdinand Mongin de Saussure was born in Geneva
Geneva
Geneva In the national languages of Switzerland the city is known as Genf , Ginevra and Genevra is the second-most-populous city in Switzerland and is the most populous city of Romandie, the French-speaking part of Switzerland...
in 1857.

How many languages spoken by ferdinand de saussure?

What are the contributions of saussure to linguistics

Can someone supply me with a full discription of Saussure's "Langue"?

What are the contributions of Saussure to linguistics?Is his approach to the study of language different from or similar to Bloom field's?
More
x