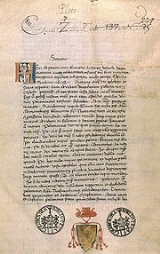 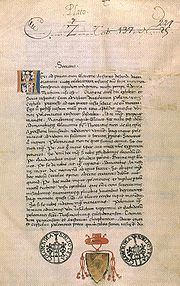 The Myth of Er is an eschatological
Eschatology
Eschatology is a part of theology, philosophy, and futurology concerned with what are believed to be the final events in history, or the ultimate destiny of humanity, commonly referred to as the end of the world or the World to Come...
legend that concludes Plato
Plato
Plato , was a Classical Greek philosopher, mathematician, student of Socrates, writer of philosophical dialogues, and founder of the Academy in Athens, the first institution of higher learning in the Western world. Along with his mentor, Socrates, and his student, Aristotle, Plato helped to lay the...
's The Republic (10.614-10.621). The story includes an account of the cosmos and the afterlife that for many centuries greatly influenced religious, philosophical and scientific thought.

The story begins as a man named Er ' onMouseout='HidePop("26616")' href="/topics/Pamphylia">Pamphylia
Pamphylia
In ancient geography, Pamphylia was the region in the south of Asia Minor, between Lycia and Cilicia, extending from the Mediterranean to Mount Taurus . It was bounded on the north by Pisidia and was therefore a country of small extent, having a coast-line of only about 75 miles with a breadth of...
) dies in battle. When the bodies of those who died in the battle are collected, ten days after his death, Er remains undecomposed. Two days later he revives when on his funeral-pyre and tells of his journey in the afterlife
Afterlife
The afterlife is the belief that a part of, or essence of, or soul of an individual, which carries with it and confers personal identity, survives the death of the body of this world and this lifetime, by natural or supernatural means, in contrast to the belief in eternal...
, including an account of reincarnation
Reincarnation
Reincarnation best describes the concept where the soul or spirit, after the death of the body, is believed to return to live in a new human body, or, in some traditions, either as a human being, animal or plant...
and the celestial spheres
Celestial spheres
The celestial spheres, or celestial orbs, were the fundamental entities of the cosmological models developed by Plato, Eudoxus, Aristotle, Ptolemy, Copernicus and others...
of the astral plane
Astral plane
The astral plane, also called the astral world, is a plane of existence postulated by classical , medieval, oriental and esoteric philosophies and mystery religions...
. The tale introduces the idea that moral people are rewarded and immoral people punished after death.

With many other souls as his companions Er had come across an awesome place with four openings, two into and out of the sky and two into and out of the earth. Judges sat between these openings and ordered the souls which path to follow: the good were guided into the path in the sky, the immoral were directed below. But when Er approached the judges he was told to remain, listening and observing in order to report his experience to mankind.

Meanwhile from the other opening in the sky, clean souls floated down, recounting beautiful sights and wondrous feelings. Others, returning from the earth, appeared dirty, haggard and tired, crying in despair when recounting their awful experience, as each was required to pay a tenfold penalty for all the wicked deeds committed when alive. There were some, however, that could not be released from the underground. Murder
Murder
Murder is the unlawful killing, with malice aforethought, of another human being, and generally this state of mind distinguishes murder from other forms of unlawful homicide...
ers, tyrant
Tyrant
A tyrant was originally one who illegally seized and controlled a governmental power in a polis. Tyrants were a group of individuals who took over many Greek poleis during the uprising of the middle classes in the sixth and seventh centuries BC, ousting the aristocratic governments.Plato and...
s and other non-political criminals were doomed to remain by the exit of the underground, unable to escape.

After seven days in the meadow the souls and Er were required to travel further. After four days they reached a place where they could see a rainbow
Rainbow
A rainbow is an optical and meteorological phenomenon that causes a spectrum of light to appear in the sky when the Sun shines on to droplets of moisture in the Earth's atmosphere. It takes the form of a multicoloured arc...
shaft of light brighter than any they had seen before. After another day's travel they reached it. This was the spindle of Necessity. Several women, including Lady Necessity
Ananke (mythology)
In Greek mythology, Ananke, also spelled Anangke, Anance, or Anagke , was the personification of destiny, necessity and fate, depicted as holding a spindle. She marks the beginning of the cosmos, along with Chronos...
, her daughters and the Siren
Siren
In Greek mythology, the Sirens were three dangerous mermaid like creatures, portrayed as seductresses who lured nearby sailors with their enchanting music and voices to shipwreck on the rocky coast of their island. Roman poets placed them on an island called Sirenum scopuli...
s were present. The souls were then organized into rows and were each given a lottery
Lottery
A lottery is a form of gambling which involves the drawing of lots for a prize.Lottery is outlawed by some governments, while others endorse it to the extent of organizing a national or state lottery. It is common to find some degree of regulation of lottery by governments...
token apart from Er.

Then of their lottery tokens, they were required to come forward in order and choose their next life. Er recalled the first to choose a new life, a man who had not known the terrors of the underground, but had been rewarded in the sky, hastily chose a powerful dictatorship. Upon further inspection he realized that, among other atrocities, he was destined to eat his own children. Er observed that this was often the case of those who had been through the path in the sky, whereas those who had been punished often chose a better life. Many preferred a life different from their previous experience. Animals chose human lives while humans often chose the apparently easier lives of animals.

After this each soul was assigned a guardian spirit to help them through their life. They passed under the throne of Lady Necessity, then traveled to the Plane of Oblivion, where the River of Forgetfulness (River Lethe) flowed. Each soul was required to drink some of the water, in varying quantities, apart from Er. As they drank, each soul forgot everything. As they lay down at night to sleep each soul was lifted up into the night in various directions for rebirth, completing their journey. Er remembered nothing of the journey back to his body. He opened his eyes to find himself lying on the funeral pyre, early in the morning, and able to recall his journey through the afterlife.

In the dialogue Socrates
Socrates
Socrates was a classical Greek Athenian philosopher. Credited as one of the founders of Western philosophy, he is an enigmatic figure known chiefly through the accounts of later classical writers, especially the writings of his students Plato and Xenophon, and the plays of his contemporary ...
introduces the story by explaining to his questioner, Glaucon
Glaucon
Glaucon son of Ariston, was the philosopher Plato's older brother. He is primarily known as a major conversant with Socrates in Republic, and the interlocutor during the Allegory of the Cave...
, that the soul must be immortal. The soul cannot be damaged or destroyed by its defect (immorality), unlike food, which will perish should it become mouldy. Neither can the soul be destroyed by any outer defect, illness for instance. Socrates tells Glaucon the "Myth of Er" to explain that the choices we make and the character we develop will have consequences after death. However, it is not simply the notion that the good are rewarded in a heaven and the wicked punished in an underworld after death. In Book II of the Republic, Socrates points out that even the gods can fall for a clever charlatan who appears perfectly just while being unjust in his psyche. They would welcome the pious but phony "man of the people" and would reject and punish the truly just but falsely accused man. Thus in the Myth of Er, the gods send down from heaven the phonies and those who are moral out of conformity and habit back to earth to choose another life. The true character of these heaven-sent returnees are revealed when they choose the lives of tyrants which look attractive to them. What is missing in the people who choose their next life is what only the philosopher can give them: an appreciation of the intrinsic worth of wisdom, justice, courage and moderation--- not the pretense of these virtues but their genuine habituation in the character of the person. No matter how life treats one or how successful or famous or powerful one becomes, one way or the other, or even, as in the Myth, how many temporary heavenly rewards or hellish punishments one experiences, these virtues will always work to one's advantage. The truly virtuous is the megalopsuchia or great-souled person and this person has eudaimonia, that is, fully flourishing humanity. In the Myth of Er we are led to the belief that philosophy will break the cycle of reward and punishment because these virtues will be their own reward.


The Spindle of Necessity

The myth mentions "The Spindle of Necessity". The cosmos is represented by the Spindle attended by siren
Siren
In Greek mythology, the Sirens were three dangerous mermaid like creatures, portrayed as seductresses who lured nearby sailors with their enchanting music and voices to shipwreck on the rocky coast of their island. Roman poets placed them on an island called Sirenum scopuli...
s and the three daughters of the Goddess Necessity known collectively as The Fates
Moirae
The Moirae, Moerae or Moirai , in Greek mythology, were the white-robed incarnations of destiny . Their number became fixed at three...
. Their duty is to keep the rims of the spindle revolving. The Fates, Sirens and Spindle are used in The Republic, partly, to help explain how known celestial bodies revolved around the Earth according to Plato's understanding of cosmology and astronomy.

The "Spindle of Necessity", according to Plato, is "shaped . . . like the ones we know." In other words, it was the same as the standard Greek spindle
Spindle (textiles)
A spindle is a wooden spike used for spinning wool, flax, hemp, cotton, and other fibres into thread. It is commonly weighted at either the bottom middle or top, most commonly by a circular or spherical object called a whorl, and may also have a hook, groove or notch, though spindles without...
. It consisted of three main parts; a hook, shaft and whorl. The hook was fixed near the top of the shaft on its long side. On the other end resided the whorl, which acted as sort of a base. The hook was used to spin the shaft, which in turn spun the whorl on the other end. 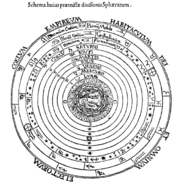 Placed on the whorl of his celestial spindle were 8 "orbits." Each of these orbits created a perfect circle. Each "orbit" is given different descriptions by Plato, which no doubt represent known bodies within our solar system.

Based on Plato's descriptions within the passage, the orbits can be identified as those of the classical planets, corresponding to the Aristotelian planetary spheres:


The descriptions of the rims accurately fit the relative distance and revolution speed of the respective bodies as would appear to an observer from Earth.