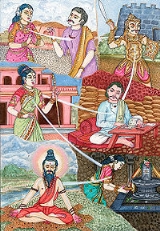 
Reincarnation best describes the concept where the soul or spirit
Spirit
The English word spirit has many differing meanings and connotations, most of them relating to a non-corporeal substance contrasted with the material body.The spirit of a living thing usually refers to or explains its consciousness.The notions of a person's "spirit" and "soul" often also overlap,...
, after the death
Death
Death is the permanent termination of the biological functions that sustain a living organism. Phenomena which commonly bring about death include old age, predation, malnutrition, disease, and accidents or trauma resulting in terminal injury....
of the body, is believed to return to live in a new human body, or, in some traditions, either as a human being, animal or plant. This doctrine is a central tenet within the majority of Indian religious traditions, such as Hinduism
Hinduism
Hinduism is the predominant and indigenous religious tradition of the Indian Subcontinent. Hinduism is known to its followers as , amongst many other expressions...
, Jainism
Jainism
Jainism is an Indian religion that prescribes a path of non-violence towards all living beings. Its philosophy and practice emphasize the necessity of self-effort to move the soul towards divine consciousness and liberation. Any soul that has conquered its own inner enemies and achieved the state...
, and Sikhism
Sikhism
Sikhism is a monotheistic religion founded during the 15th century in the Punjab region, by Guru Nanak Dev and continued to progress with ten successive Sikh Gurus . It is the fifth-largest organized religion in the world and one of the fastest-growing...
; the Buddhist
Buddhism
Buddhism is a religion and philosophy encompassing a variety of traditions, beliefs and practices, largely based on teachings attributed to Siddhartha Gautama, commonly known as the Buddha . The Buddha lived and taught in the northeastern Indian subcontinent some time between the 6th and 4th...
concept of rebirth
Rebirth (Buddhism)
Rebirth in Buddhism is the doctrine that the evolving consciousness or stream of consciousness upon death , becomes one of the contributing causes for the arising of a new aggregation...
is also often referred to as reincarnation.

What do you think about Reincarnation sympthy4@mail.com in regards to the spirit leaving the body upon death, perhaps spending time in the spiritual ...
More
x