Encyclopedia
The Museo Nacional de Arte (MUNAL) (National Museum of Art) is the Mexican
Mexico
The United Mexican States , commonly known as Mexico , is a federal constitutional republic in North America. It is bordered on the north by the United States; on the south and west by the Pacific Ocean; on the southeast by Guatemala, Belize, and the Caribbean Sea; and on the east by the Gulf of...
national art museum, located in the historical center of Mexico City
Mexico City
Mexico City is the Federal District , capital of Mexico and seat of the federal powers of the Mexican Union. It is a federal entity within Mexico which is not part of any one of the 31 Mexican states but belongs to the federation as a whole...
. The museum is housed in a neoclassical building at No. 8 Tacuba, Col. Centro, Mexico City. It includes a large collection representing the history of Mexican art
Mexican art
Mexican art consists of the various visual and plastic arts which developed over the geographical area now known as Mexico. The development of these arts roughly follow the history of Mexico, divided into the Mesoamerican era, the colonial period, with the period after the gaining of Independence...
from the mid-sixteenth century to the mid 20th century. It is recognizable by Manuel Tolsá
Manuel Tolsá
Manuel Tolsá was a prolific Neoclassical architect and sculptor in Spain and Mexico.-Biography:...
's large equestrian statue of Charles IV of Spain
Charles IV of Spain
Charles IV was King of Spain from 14 December 1788 until his abdication on 19 March 1808.-Early life:...
, who was the monarch just before Mexico gained its independence. It was originally in the Zocalo
Zócalo
The Zócalo is the main plaza or square in the heart of the historic center of Mexico City. The plaza used to be known simply as the "Main Square" or "Arms Square," and today its formal name is Plaza de la Constitución...
but it was moved to several locations, not out of deference to the king but rather to conserve a piece of art, according to the plaque at the base. It arrived at its present location in 1979.

The museum was founded in 1982 as the Museo Nacional de Arte, and re-inaugurated in 2000, after reopening its doors to the public as MUNAL after intense remodeling and technical upgrades to the facility. It currently focuses on the exhibition, study and diffusion of Mexican and international art from the 16th century to the first half of the 20th century. Its permanent collection contains more than 3,000 pieces and has 5,500m2 of exhibition space. MUNAL is a subdivision of the Instituto Nacional de Bellas Artes
Palacio de Bellas Artes
The Palacio de Bellas Artes is the most important cultural center in Mexico City as well as the rest of the country of Mexico...
and as part of this organization is involved in projects concerning the conservation, exhibition, and study of the fine arts of Mexico. The museum also offers workshops, colloquiums, publication and other outreaches to the public. There are also volunteer opportunities such as the Voluntariado and the Amigos de MUNAL associations.


The Palace of Communications building 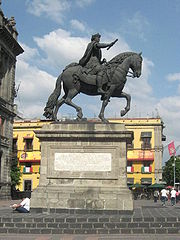 MUNAL is located in the old Palace of Communications. In the early part of the 20th century, the government hired Italian architect Silvio Contri to design and build this “palace” to house the Secretariat of Communications and Public Works, with the intention to show Mexico's commitment to modernization. The Palace was constructed on the former site of the hospitals of San Andres and of Gonzalez Echeverria. The architectural design is eclectic, mixing elements of past architectural styles, which is characteristic of that time period. This blending would later solidify into a movement called “modernismo” both because of the tendency to use newly-devised construction techniques and the tendency to use metal in the decorative aspects, to symbolize progress in the Industrial Age
Industrial Age
Industrial Age may refer to:*Industrialisation*The Industrial Revolution...
. The decorative elements of the building were done by the Coppedé family of Florence
Florence
Florence is the capital city of the Italian region of Tuscany and of the province of Florence. It is the most populous city in Tuscany, with approximately 370,000 inhabitants, expanding to over 1.5 million in the metropolitan area....
, who designed the door knockers, the window frames, the leaded crystal, the stonework, the furniture, lamps and ironwork among many other elements. Over the years, much of the Palace deteriorated until around 2000, when Project MUNAL restored the palace to its original look while added the latest technology for the preservation of artistic works.
Two rooms that stand out are the decoration of the Reception Hall and the sculptures in the Patio de los Leones. The Reception Hall is on the second floor and designed to imitate the splendor of similar halls in Europe. It is profusely decorated with precious metal and crystal ornaments as well as allegorical murals dedicated to themes such as science, the arts, liberty, history, work and progress. The work devoted to the concept of progress subdivides into four themes of force, justice, wisdom and wealth. This hall became the preferred place for President Porfirio Diaz to perform public declarations and receive dignitaries from abroad. Like the rest of the building the Patio of the Liones synthesizes a number of different architectural styles. The two primary styles seen here are Classic and Gothic with other styles introduced in the forms of sculptures, lighting and sculpted stonework. In the center is a large semicircular staircase to the upper floors.

Later in the 20th century, the building served as the Archivo General de la Nación
Archivo General de la Nación (Mexico)
The Archivo General de la Nación is charged by the Mexican state to "be the governing body of the national archives and the central consultative entity of the Federal Executive." The writer Edmundo O'Gorman was its general director from 1938 until 1952...
and from 1982 as the Museo Nacional de Arte. The plaza in front of the building is named after Manuel Tolsá
Manuel Tolsá
Manuel Tolsá was a prolific Neoclassical architect and sculptor in Spain and Mexico.-Biography:...
, who created the statue of Carlos IV there, also known as El Caballito. Today almost all of the building is used to house the permanent collection of MUNAL with the Reception Hall and the Patio de los Leones used for events such as concerts, book-signings and press conferences.

The museum’s permanent collection is designed to give a panoramic view of the development of the fine arts in Mexico from the early colonial period to the mid-twentieth century. The artwork is subdivided into three distinct periods. The first covered the colonial period from 1550 to 1821. The second covers the first century after Independence
Mexican War of Independence
The Mexican War of Independence was an armed conflict between the people of Mexico and the Spanish colonial authorities which started on 16 September 1810. The movement, which became known as the Mexican War of Independence, was led by Mexican-born Spaniards, Mestizos and Amerindians who sought...
and the third covers the period after the Mexican Revolution
Mexican Revolution
The Mexican Revolution was a major armed struggle that started in 1910, with an uprising led by Francisco I. Madero against longtime autocrat Porfirio Díaz. The Revolution was characterized by several socialist, liberal, anarchist, populist, and agrarianist movements. Over time the Revolution...
to the 1950s. Works created after that time period are on display at a number of museums, including the Museum of Modern Art in Chapultepec Park. The collection of art from the colonial period is entitled “Asimilación de occidente” (Assimilation of the West) and are contained within Salons 1-14 on the second floor. This collection shows how western-style painting transferred over and synthesized in Mexico, eventually leading to the establishment of Mexico’s own fine arts institution, the Academy of San Carlos
Academy of San Carlos
The Academy of San Carlos is located at 22 Academia Street in just northeast of the main plaza of Mexico City. It was the first major art academy and the first art museum in the Americas. It was founded in 1781 as the School of Engraving and moved to the Academia Street location about 10 years later...
, the first of its kind in the Americas. Art from the first century of Mexican Independence (1810–1910) is entitled “La construcción de la Nación” (Construction of a Nation) housed in Salons 19-26 of the second floor. Coinciding with the Romanticism period, most paintings have themes such as Mexican customs and landscapes with the purpose of defining a Mexican identity. The last time period is titled “Estrategías plásticas para un México moderno” (Strategies for the fine arts in modern Mexico) and house in Salons 27-33 on the first floor. Historically, this period is after the end of the Mexican Revolution when questions of modernity and nationalism were foremost. It also coincides with the development of the Mexican muralist movement.

Some of the salons are devoted to temporary exhibitions, such as the paintings of Pedro Gualdi from the 19th century, and more contemporary photography exhibitions by Carlos Monsivais
Carlos Monsiváis
Carlos Monsiváis Aceves was a Mexican writer, critic, political activist, and journalist. of French decent He also wrote political opinion columns in leading newspapers and was considered to be an opinion leader within the country's progressive sectors. His generation of writers includes Elena...
and Marina Yampolsky. One of the latest exhibitions was called “The Practice of Everyday Life” which occurred in 2009.