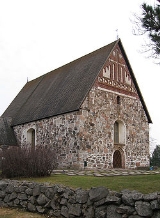 Encyclopedia
Sipoo (ˈsipoː) is a municipality of Finland
Finland
Finland , officially the Republic of Finland, is a Nordic country situated in the Fennoscandian region of Northern Europe. It is bordered by Sweden in the west, Norway in the north and Russia in the east, while Estonia lies to its south across the Gulf of Finland.Around 5.4 million people reside...
. Its seat is in Nikkilä
Nikkilä
Nikkilä is a village located in the Sipoo municipality in the Eastern Uusimaa region of the Southern Finland province. Nikkilä is the centre of Sipoo....
/Nickby.
It is the eastern neighbour of Helsinki
Helsinki
Helsinki is the capital and largest city in Finland. It is in the region of Uusimaa, located in southern Finland, on the shore of the Gulf of Finland, an arm of the Baltic Sea. The population of the city of Helsinki is , making it by far the most populous municipality in Finland. Helsinki is...
and is located in the Uusimaa
Uusimaa
Uusimaa, or Nyland in Swedish, is a region in Finland. It borders the regions Finland Proper, Tavastia Proper, Päijänne Tavastia and Kymenlaakso...
region
Regions of Finland
Finland consists of 19 regions called in Finnish and in Swedish. The regions are governed by regional councils, which serve as forums of cooperation for the municipalities of a region. The main tasks of the regions are regional planning and development of enterprise and education. In addition,...
. The municipality has a population of
and covers an area of km2 of
which km2
is water. The population density
Population density
Population density is a measurement of population per unit area or unit volume. It is frequently applied to living organisms, and particularly to humans...
is
PD/km2.

The once almost completely Swedish-speaking municipality is since 1953 bilingual, a majority being Finnish speakers since 2003, due to migration from other parts of Finland. Today the Finnish
Finnish language
Finnish is the language spoken by the majority of the population in Finland Primarily for use by restaurant menus and by ethnic Finns outside Finland. It is one of the two official languages of Finland and an official minority language in Sweden. In Sweden, both standard Finnish and Meänkieli, a...
-speaking majority stands for ca and the Swedish
Finland-Swedish
Finland Swedish is a general term for the closely related cluster of dialects of Swedish spoken in Finland by Swedish-speaking Finns as their mother tongue...
-speaking minority for about of the population.

On June 26, 2006, the Sipoo town council decided on a strategy to triple the municipality's population over the next 25 years. The decision was made after Helsinki announced plans to annex a part of the municipality in order to continue to build high-end urbanizations in the coastline (and thus high-tax revenue producing). The Finnish Council of State
Finnish Council of State
The Cabinet of Finland is the body that directs the Government of Finland. However, in governmental translations to English, the distinction is often blurred between cabinet and government in the wider sense...
voted in favour of the annexation on June 28, 2007, with votes 8 to 4. Sipoo disputed this and appealed the Supreme Administrative Court
Supreme Administrative Court of Finland
The Supreme Administrative Court of Finland is the highest court in the Finnish administrative court system, parallel to the Supreme Court of Finland. Its jurisdiction covers the legality of the decisions of government officials, and its decisions are final...
but the court upheld the decision of the Council of State and the annexation took place on January 1, 2009.
As Helsinki did not directly border Sipoo at any point, the city of Vantaa
Vantaa
Vantaa is a city and municipality in Finland. Helsinki, Vantaa, Espoo and Kauniainen make up the Helsinki Metropolitan Area.Vantaa, with its population of , is the fourth most populated city of Finland. The biggest airport in Finland, the Helsinki-Vantaa Airport, is located there...
ceded the area lain between Helsinki and Sipoo to Helsinki in the process.

Aurskog-Høland
Aurskog-Høland
Aurskog-Høland is a municipality in Akershus county, Norway. It is part of the Romerike traditional region. The administrative centre of the municipality is the village of Bjørkelangen.- Name :...
, Norway
Norway
Norway , officially the Kingdom of Norway, is a Nordic unitary constitutional monarchy whose territory comprises the western portion of the Scandinavian Peninsula, Jan Mayen, and the Arctic archipelago of Svalbard and Bouvet Island. Norway has a total area of and a population of about 4.9 million...
Frederikssund
Frederikssund
Frederikssund Kommune is a municipality on the shores of Roskilde Fjord in the northern part of the island of Zealand in eastern Denmark. On 1 January 2007, the municipality was enlarged to include the old Jægerspris, Slangerup, and Skibby municipalities. It now covers an area of 260 km² and...
, Denmark
Denmark
Denmark is a Scandinavian country in Northern Europe. The countries of Denmark and Greenland, as well as the Faroe Islands, constitute the Kingdom of Denmark . It is the southernmost of the Nordic countries, southwest of Sweden and south of Norway, and bordered to the south by Germany. Denmark...
Kumla
Kumla
Kumla is a locality and the seat of Kumla Municipality, Örebro County, Sweden with 20 456 inhabitants in 2010.-History:Traditionally Kumla was known as a shoemaker town with a history back to the first half of the 19th century....
, Sweden
Sweden
Sweden , officially the Kingdom of Sweden , is a Nordic country on the Scandinavian Peninsula in Northern Europe. Sweden borders with Norway and Finland and is connected to Denmark by a bridge-tunnel across the Öresund....
Kuusalu
Kuusalu Commune
Kuusalu Parish is a rural municipality in northern Estonia, the largest in Harju County. After joining with the adjacent Loksa Parish in 2005, the municipality has now a population of 6,863 and covers an area of 707.97 km²...
, Estonia
Estonia
Estonia , officially the Republic of Estonia , is a state in the Baltic region of Northern Europe. It is bordered to the north by the Gulf of Finland, to the west by the Baltic Sea, to the south by Latvia , and to the east by Lake Peipsi and the Russian Federation . Across the Baltic Sea lies...