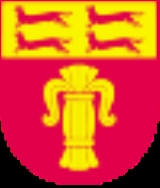 Ostrobothnia is one of the two Finnish regions with a Swedish speaking majority, the other being Åland. The Swedish-speakers make up 51.2%. Despite this, the region is linguistically heterogeneous, encompassing both exclusively Finnish and Swedish-speaking municipalities in addition to bilingual ones.

Geographically, Ostrobothnia has little topographical relief, because it is mostly former seafloor brought to surface by post-glacial rebound
Post-glacial rebound
Post-glacial rebound is the rise of land masses that were depressed by the huge weight of ice sheets during the last glacial period, through a process known as isostasy...
. Ostrobothnia has both vast expanses of cultivated fields (lakeus) as in Southern Ostrobothnia
Southern Ostrobothnia
Southern Ostrobothnia is one of the 20 regions of Finland.Seinäjoki is the regional centre and by far the largest city in the area.- Historical provinces :For History, Geography and Culture see: Ostrobothnia- Municipalities :...
, and the archipelago
Archipelago
An archipelago , sometimes called an island group, is a chain or cluster of islands. The word archipelago is derived from the Greek ἄρχι- – arkhi- and πέλαγος – pélagos through the Italian arcipelago...
of Kvarken
Kvarken
Kvarken is the narrow region in the Gulf of Bothnia separating the Bothnian Bay from the Bothnian Sea...
(Finnish: Merenkurkku). Glacial transport has deposited large quantities of glacial erratics (rocks) in the area. Like elsewhere in Pohjanmaa, rivers are an important part of the landscape. The major rivers that discharge into the Gulf of Bothnia in Ostrobothnia are Kyrönjoki
Kyrönjoki
Kyrönjoki is a river of Finland. It is located in Southern Ostrobothnia region and flows into the Gulf of Bothnia.-See also:*List of rivers of Finland...
, Lapuanjoki and Ähtävänjoki.

The regional tree is the Black Alder (Alnus glutinosa), the regional mammal is the Common Elk
Moose
The moose or Eurasian elk is the largest extant species in the deer family. Moose are distinguished by the palmate antlers of the males; other members of the family have antlers with a dendritic configuration...
(Alces alces alces), the regional stone is the Vaasa granite
Vaasa granite
Vaasa granite is a migmatitic Paleoproterozoic garnet-bearing granitoid with variable amounts of gneissose enclaves. The name refers to occurrences at Vaasa, on the west coast of Finland....
and the regional song is "The march of Vaasa" .

There are 16 municipalities in Ostrobothnia region. Cities and towns are marked in bold, and the links are only in the majority language names.

The bundle is a symbol of the Royal House of Vasa
Vasa
Vasa may refer to:* House of Vasa, a medieval Swedish noble family, the royal house of Sweden 1523–1654 and of Poland 1587–1668** Vasa , a Swedish warship that sank in 1628, since restored...
; a Vasa king established the city of Vaasa
Vaasa
Vaasa is a city on the west coast of Finland. It received its charter in 1606, during the reign of Charles IX of Sweden and is named after the Royal House of Vasa...
, the capital of the region. The running weasels are a symbol of Pohjanmaa
Pohjanmaa
Pohjanmaa is the name of a geographical region in Finland which can refer to:-Former entities:...
.