Encyclopedia
The Munich Stadtmuseum is the city museum of Munich
Munich
Munich The city's motto is "" . Before 2006, it was "Weltstadt mit Herz" . Its native name, , is derived from the Old High German Munichen, meaning "by the monks' place". The city's name derives from the monks of the Benedictine order who founded the city; hence the monk depicted on the city's coat...
. It was founded in 1888 by Ernst von Destouches and is located in the former municipal arsenal and stables, both buildings of the late Gothic
Gothic art
Gothic art was a Medieval art movement that developed in France out of Romanesque art in the mid-12th century, led by the concurrent development of Gothic architecture. It spread to all of Western Europe, but took over art more completely north of the Alps, never quite effacing more classical...
period. 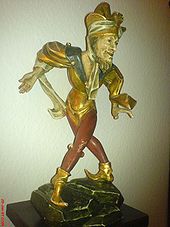 The exhibition includes among many other artworks the famous gothic Morris dance
Morris dance
Morris dance is a form of English folk dance usually accompanied by music. It is based on rhythmic stepping and the execution of choreographed figures by a group of dancers. Implements such as sticks, swords, handkerchiefs and bells may also be wielded by the dancers...
rs, created by Erasmus Grasser
Erasmus Grasser
Erasmus Grasser was a leading sculptor in Munich in the early 16th century.He developed in an animated and realistic style, furthering on the works of Nikolaus Gerhaert...
for the festival hall of the Old Town Hall
Old Town Hall, Munich
The Old Town Hall , until 1874 the domicile of the municipality, serves today as a building for the city council in Munich. The Old Town Hall bounds the central square Marienplatz on its east side.-Architecture:...
, and the original putto
Putto
A putto is a figure of an infant often depicted as a young male. Putti are defined as chubby, winged or wingless, male child figure in nude. Putti are distinct from cherubim, but some English-speakers confuse them with each other, except that in the plural, "the Cherubim" refers to the biblical...
s of the Mary's Column
Marienplatz
Marienplatz is a central square in the city center of Munich, Germany. It has been the city's main square since 1158.-Architecture:...
.

This exhibitions explains the history of the former "Hauptstadt der Bewegung" (Capital of the [Nazi] Movement).

More than 2.000 musical instruments from Africa, America, Asia and Europe belong to this grand collection.

This collection displays the cultural history of the puppet theatre.

The Fotomuseum was founded in 1963 and owns already more than 500.000 photographs.

The museum with its large archive shows weekly screenings and has once become well known for the restoration of movies of Fritz Lang
Fritz Lang
Friedrich Christian Anton "Fritz" Lang was an Austrian-American filmmaker, screenwriter, and occasional film producer and actor. One of the best known émigrés from Germany's school of Expressionism, he was dubbed the "Master of Darkness" by the British Film Institute...
, Ernst Lubitsch
Ernst Lubitsch
Ernst Lubitsch was a German-born film director. His urbane comedies of manners gave him the reputation of being Hollywood's most elegant and sophisticated director; as his prestige grew, his films were promoted as having "the Lubitsch touch."In 1947 he received an Honorary Academy Award for his...
, Georg Wilhelm Pabst
Georg Wilhelm Pabst
-Biography:Pabst was born in Raudnitz, Bohemia, Austria-Hungary , the son of a railroad employee.Returning from the United States, he was in France when World War I began...
and Friedrich Wilhelm Murnau
Friedrich Wilhelm Murnau
Friedrich Wilhelm "F. W." Murnau was one of the most influential German film directors of the silent era, and a prominent figure in the expressionist movement in German cinema during the 1920s...
.