Encyclopedia
A multirole combat aircraft is an aircraft
Aircraft
An aircraft is a vehicle that is able to fly by gaining support from the air, or, in general, the atmosphere of a planet. An aircraft counters the force of gravity by using either static lift or by using the dynamic lift of an airfoil, or in a few cases the downward thrust from jet engines.Although...
designed to act in at least two different roles in combat. The primary role is usually a fighter
Fighter aircraft
A fighter aircraft is a military aircraft designed primarily for air-to-air combat with other aircraft, as opposed to a bomber, which is designed primarily to attack ground targets...
—hence, it is as often called a multirole fighter—while the secondary role is usually air-to-surface attack. More roles are added, such as air reconnaissance, forward air control
Forward air control
Forward air control is the provision of guidance to Close Air Support aircraft intended to ensure that their attack hits the intended target and does not injure friendly troops. This task is carried out by a forward air controller . For NATO forces the qualifications and experience required to be...
, and electronic warfare
Electronic warfare
Electronic warfare refers to any action involving the use of the electromagnetic spectrum or directed energy to control the spectrum, attack an enemy, or impede enemy assaults via the spectrum. The purpose of electronic warfare is to deny the opponent the advantage of, and ensure friendly...
. As of the subtypes of attack missions, besides the most often air interdiction
Air interdiction
Air interdiction is the use of aircraft to attack tactical ground targets that are not in close proximity to friendly ground forces. It differs from close air support because it does not directly support ground operations and is not closely coordinated with ground units...
, there may be suppression of enemy air defense (SEAD), or even close air support
Close air support
In military tactics, close air support is defined as air action by fixed or rotary winged aircraft against hostile targets that are close to friendly forces, and which requires detailed integration of each air mission with fire and movement of these forces.The determining factor for CAS is...
(CAS).

Strike fighter
Strike fighter
In a current military parlance, a strike fighter is a multi-role combat aircraft designed to operate primarily in the air-to-surface attack role while also incorporating certain performance characteristics of a fighter aircraft. As a category, it is distinct from fighter-bombers...
, which similarly refers to a fighter capable of attack role, for historical reasons implies putting more emphasis on the interdiction aspect.

The main motivation for developing multirole aircraft is cost reduction. A fleet of multirole aircraft, when comparing to separate fleets of dedicated aircraft, costs less to develop, to manufacture, to maintain, and to supply. Some aircraft are called swing-role, to emphasize the ability of a quick role change, either at short notice, or even within the same mission.


History of the term

Multi-Role Combat Aircraft was the title of a multinational European project in 1968 that became the Panavia Tornado
Panavia Tornado
The Panavia Tornado is a family of twin-engine, variable-sweep wing combat aircraft, which was jointly developed and manufactured by the United Kingdom, West Germany and Italy...
aircraft. During its development, the project had also been briefly called Multi-Role Aircraft (MRA). The same aircraft is now referred to as the Tornado IDS, or InterDictor/Strike, to differentiate it from a later aircraft based on essentially the same airframe, known as Panavia Tornado ADV
Panavia Tornado ADV
The Panavia Tornado Air Defence Variant is a long-range, twin-engine interceptor version of the swing-wing Panavia Tornado. The aircraft's first flight was on 27 October 1979, and it entered service in 1986. It was retired on 22 March 2011 by the Royal Air Forceand is now only in service with the...
or air-defence variant, with two types having diverged from an initial design presumably intended to perform both missions. 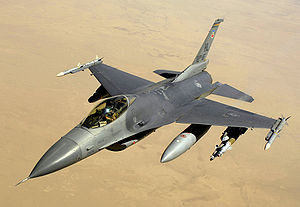 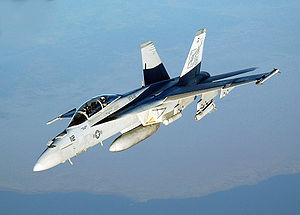 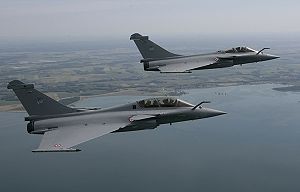 Listed below are examples of multirole combat aircraft and the country where they have been developed: