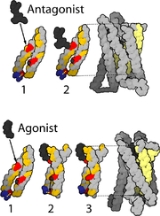 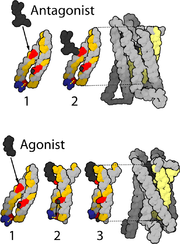 The μ-opioid receptors (MOR) are a class of opioid receptor
Opioid receptor
Opioid receptors are a group of G protein-coupled receptors with opioids as ligands. The endogenous opioids are dynorphins, enkephalins, endorphins, endomorphins and nociceptin. The opioid receptors are ~40% identical to somatostatin receptors...
s with high affinity for enkephalin
Enkephalin
An enkephalin is a pentapeptide involved in regulating nociception in the body. The enkephalins are termed endogenous ligands, or specifically endorphins, as they are internally derived and bind to the body's opioid receptors. Discovered in 1975, two forms of enkephalin were revealed, one...
s and beta-endorphin
Beta-endorphin
β-endorphin is an endogenous opioid peptide neurotransmitter found in the neurons of both the central and peripheral nervous system.The amino acid sequence is:...
but low affinity for dynorphin
Dynorphin
Dynorphins are a class of opioid peptides that arise from the precursor protein prodynorphin. When prodynorphin is cleaved during processing by proprotein convertase 2 , multiple active peptides are released: dynorphin A, dynorphin B, and α/β-neo-endorphin...
s. They are also referred to as μ opioid peptide
Peptide
Peptides are short polymers of amino acid monomers linked by peptide bonds. They are distinguished from proteins on the basis of size, typically containing less than 50 monomer units. The shortest peptides are dipeptides, consisting of two amino acids joined by a single peptide bond...
(MOP) receptors. The prototypical μ receptor agonist
Agonist
An agonist is a chemical that binds to a receptor of a cell and triggers a response by that cell. Agonists often mimic the action of a naturally occurring substance...
is the opium
Opium
Opium is the dried latex obtained from the opium poppy . Opium contains up to 12% morphine, an alkaloid, which is frequently processed chemically to produce heroin for the illegal drug trade. The latex also includes codeine and non-narcotic alkaloids such as papaverine, thebaine and noscapine...
alkaloid
Alkaloid
Alkaloids are a group of naturally occurring chemical compounds that contain mostly basic nitrogen atoms. This group also includes some related compounds with neutral and even weakly acidic properties. Also some synthetic compounds of similar structure are attributed to alkaloids...
morphine
Morphine
Morphine is a potent opiate analgesic medication and is considered to be the prototypical opioid. It was first isolated in 1804 by Friedrich Sertürner, first distributed by same in 1817, and first commercially sold by Merck in 1827, which at the time was a single small chemists' shop. It was more...
; μ (mu) refers to morphine.

There are three well-characterized variants of the μ opioid receptor, though reverse-transcriptase PCR has identified up to 10 total splice variants in humans.

In 2003, a μ3 variant was described, which was responsive to opiate alkaloid
Alkaloid
Alkaloids are a group of naturally occurring chemical compounds that contain mostly basic nitrogen atoms. This group also includes some related compounds with neutral and even weakly acidic properties. Also some synthetic compounds of similar structure are attributed to alkaloids...
s but not opioid peptide
Peptide
Peptides are short polymers of amino acid monomers linked by peptide bonds. They are distinguished from proteins on the basis of size, typically containing less than 50 monomer units. The shortest peptides are dipeptides, consisting of two amino acids joined by a single peptide bond...
s.

The μ-receptors exist mostly presynaptically in the periaqueductal gray
Periaqueductal gray
Periaqueductal gray is the gray matter located around the cerebral aqueduct within the tegmentum of the midbrain. It plays a role in the descending modulation of pain and in defensive behaviour...
region, and in the superficial dorsal horn of the spinal cord
Spinal cord
The spinal cord is a long, thin, tubular bundle of nervous tissue and support cells that extends from the brain . The brain and spinal cord together make up the central nervous system...
(specifically the substantia gelatinosa of Rolando
Substantia gelatinosa of Rolando
The apex of the posterior horn of the gray matter of the spinal cord is capped by a V-shaped or crescentic mass of translucent, gelatinous neuroglia, termed the substantia gelatinosa of Rolando , which contains both neuroglia cells, and small nerve cells...
). Other areas where μ-receptors have been located include the external plexiform layer of the olfactory bulb
Olfactory bulb
The olfactory bulb is a structure of the vertebrate forebrain involved in olfaction, the perception of odors.-Anatomy:In most vertebrates, the olfactory bulb is the most rostral part of the brain. In humans, however, the olfactory bulb is on the inferior side of the brain...
, the nucleus accumbens
Nucleus accumbens
The nucleus accumbens , also known as the accumbens nucleus or as the nucleus accumbens septi , is a collection of neurons and forms the main part of the ventral striatum...
, in several layers of the cerebral cortex
Cerebral cortex
The cerebral cortex is a sheet of neural tissue that is outermost to the cerebrum of the mammalian brain. It plays a key role in memory, attention, perceptual awareness, thought, language, and consciousness. It is constituted of up to six horizontal layers, each of which has a different...
and in some of the nuclei
Nucleus (neuroanatomy)
In neuroanatomy, a nucleus is a brain structure consisting of a relatively compact cluster of neurons. It is one of the two most common forms of nerve cell organization, the other being layered structures such as the cerebral cortex or cerebellar cortex. In anatomical sections, a nucleus shows up...
of the amygdala
Amygdala
The ' are almond-shaped groups of nuclei located deep within the medial temporal lobes of the brain in complex vertebrates, including humans. Shown in research to perform a primary role in the processing and memory of emotional reactions, the amygdalae are considered part of the limbic system.-...
, as well as the nucleus of the solitary tract.

μ receptors are also found in the intestinal tract. This causes constipation, a major side effect of μ agonists, due to inhibition of peristaltic action.

MOR can mediate acute changes in neuronal excitability via "disinhibition" of presynaptic release of GABA
Gamma-aminobutyric acid
γ-Aminobutyric acid is the chief inhibitory neurotransmitter in the mammalian central nervous system. It plays a role in regulating neuronal excitability throughout the nervous system...
(see works from Charles Chavkin and Roger Nicoll). Activation of the MOR leads to different effects on dendritic spines depending upon the agonist, and may be an example of functional selectivity
Functional Selectivity
Functional selectivity is the ligand-dependent selectivity for certain signal transduction pathways in one and the same receptor. This can be present when a receptor has several possible signal transduction pathways...
at the μ receptor. The physiological and pathological roles of these two distinct mechanisms remain to be clarified. Perhaps, both might be involved in opioid addiction and opioid-induced deficits in cognition.

Activation of the μ receptor by an agonist such as morphine
Morphine
Morphine is a potent opiate analgesic medication and is considered to be the prototypical opioid. It was first isolated in 1804 by Friedrich Sertürner, first distributed by same in 1817, and first commercially sold by Merck in 1827, which at the time was a single small chemists' shop. It was more...
causes analgesia, sedation
Sedation
Sedation is the reduction of irritability or agitation by administration of sedative drugs, generally to facilitate a medical procedure or diagnostic procedure...
, slightly reduced blood pressure
Blood pressure
Blood pressure is the pressure exerted by circulating blood upon the walls of blood vessels, and is one of the principal vital signs. When used without further specification, "blood pressure" usually refers to the arterial pressure of the systemic circulation. During each heartbeat, BP varies...
, itching, nausea
Nausea
Nausea , is a sensation of unease and discomfort in the upper stomach with an involuntary urge to vomit. It often, but not always, precedes vomiting...
, euphoria
Euphoria
Euphoria is an emotional and mental state defined as a sense of great elation and well being.Euphoria may also refer to:* Euphoria , a genus of scarab beetles* Euphoria, a genus name previously used for the longan and other trees...
, decreased respiration, miosis
Miosis
Miosis is the constriction of the pupil of the eye to two millimeters or less...
(constricted pupils) and decreased bowel motility often leading to constipation
Constipation
Constipation refers to bowel movements that are infrequent or hard to pass. Constipation is a common cause of painful defecation...
. Some of these side effects, such as sedation, euphoria and decreased respiration, tend to lessen with continued use as tolerance develops. Analgesia, miosis and reduced bowel motility tend to persist; little tolerance develops to these effects.

Long-term or high dose use of opioids may also lead to additional mechanisms of tolerance becoming involved. This includes downregulation of mu opioid receptor gene expression, so the number of receptors presented on the cell surface is actually reduced, as opposed to the more short-term desensitisation induced by β-arrestins or RGS proteins. Another long-term adaptation to opioid use can be upregulation of glutamate and other pathways in the brain which can exert an opioid-opposing effect and so reduce the effects of opioid drugs by altering downstream pathways, regardless of mu opioid receptor activation.

Opioid overdoses kill through apnea
Apnea
Apnea, apnoea, or apnœa is a term for suspension of external breathing. During apnea there is no movement of the muscles of respiration and the volume of the lungs initially remains unchanged...
and fatal hypoxia
Hypoxia (medical)
Hypoxia, or hypoxiation, is a pathological condition in which the body as a whole or a region of the body is deprived of adequate oxygen supply. Variations in arterial oxygen concentrations can be part of the normal physiology, for example, during strenuous physical exercise...
, often
aggravated by simultaneous use of alcohol
Alcohol
In chemistry, an alcohol is an organic compound in which the hydroxy functional group is bound to a carbon atom. In particular, this carbon center should be saturated, having single bonds to three other atoms....
, benzodiazepines or barbiturates. Substantial tolerance to respiratory depression develops quickly, and tolerant individuals can withstand larger doses (an example of Mithridatism
Mithridatism
Mithridatism is the practice of protecting oneself against a poison by gradually self-administering non-lethal amounts. The word derives from Mithridates VI, the King of Pontus, who so feared being poisoned that he regularly ingested small doses, aiming to develop immunity...
). However tolerance to respiratory depression is lost just as quickly during withdrawal. Many overdoses occur in people who misuse their medication after being in withdrawal long enough to lose the tolerance to respiratory depression. Less commonly, massive overdoses have been known to cause circulatory collapse
Circulatory collapse
A circulatory collapse is defined as a general or specific failure of the circulation, either cardiac or peripheral in nature. A common cause of this could be shock or trauma from injury or surgery...
.

Opioid overdoses can be rapidly reversed with any of several opioid antagonists
Receptor antagonist
A receptor antagonist is a type of receptor ligand or drug that does not provoke a biological response itself upon binding to a receptor, but blocks or dampens agonist-mediated responses...
: naloxone
Naloxone
Naloxone is an opioid antagonist drug developed by Sankyo in the 1960s. Naloxone is a drug used to counter the effects of opiate overdose, for example heroin or morphine overdose. Naloxone is specifically used to counteract life-threatening depression of the central nervous system and respiratory...
, or naltrexone
Naltrexone
Naltrexone is an opioid receptor antagonist used primarily in the management of alcohol dependence and opioid dependence. It is marketed in generic form as its hydrochloride salt, naltrexone hydrochloride, and marketed under the trade names Revia and Depade...
, differing primarily in their duration of action and potency. While commonly referred to as antagonists, and when used to treat an overdose they do appear to function as such, naloxone & naltrexone are inverse agonist
Inverse agonist
In the field of pharmacology, an inverse agonist is an agent that binds to the same receptor as an agonist but induces a pharmacological response opposite to that agonist....
s.