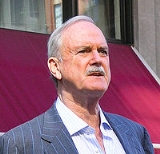 In the mid 1970s, Cleese and his first wife, Connie Booth
Connie Booth
Constance "Connie" Booth is an American-born writer and actress, known for appearances on British television and particularly for her portrayal of Polly Sherman in the popular 1970s television show Fawlty Towers, which she co-wrote with her then-husband John Cleese.-Biography:Booth's father was a...
, co-wrote and starred in the British sitcom Fawlty Towers
Fawlty Towers
Fawlty Towers is a British sitcom produced by BBC Television and first broadcast on BBC2 in 1975. Twelve television program episodes were produced . The show was written by John Cleese and his then wife Connie Booth, both of whom played major characters...
.

Six hundred years ago we would have been burned for this. Now, what I'm suggesting is that we've advanced.

If I like chocolate it won't surprise you that I have a few chocolates in my fridge, but if you find out I've got 16 warehouses full of chocolate, you'd think I was insane. All these rich guys are insane, obsessive compulsive twits obsessed with money — money is all they think about — they're all nuts.

If I had not gone into Monty Python, I probably would have stuck to my original plan to graduate and become a chartered accountant, perhaps a barrister lawyer, and gotten a nice house in the suburbs, with a nice wife and kids, and gotten a country club membership, and then I would have killed myself.

He who laughs most, learns best.

As quoted in Creating Emotionally Safe Schools : A Guide for Educators and Parents‎ (2001) by Jane Bluestein, p. 215

If you want creative workers, give them enough time to play.

If God did not intend for us to eat animals, then why did he make them out of meat?