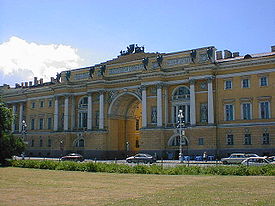 The Synod was established by Peter I of Russia
Peter I of Russia
Peter the Great, Peter I or Pyotr Alexeyevich Romanov Dates indicated by the letters "O.S." are Old Style. All other dates in this article are New Style. ruled the Tsardom of Russia and later the Russian Empire from until his death, jointly ruling before 1696 with his half-brother, Ivan V...
on January 25, 1721 as a part of his church reform
Church reform of Peter I
The Church reform of Peter I introduced what some believe was a period of Caesaropapism in the history of the Russian Orthodox Church, when the church apparatus effectively became a department of state.-Background:...
. Its establishment was followed by the abolition of the Patriarchate. The Synod was composed partly of ecclesiastical persons, partly of laymen appointed by the Tsar
Tsar
Tsar is a title used to designate certain European Slavic monarchs or supreme rulers. As a system of government in the Tsardom of Russia and Russian Empire, it is known as Tsarist autocracy, or Tsarism...
. Among them were the Metropolitan
Metropolitan bishop
In Christian churches with episcopal polity, the rank of metropolitan bishop, or simply metropolitan, pertains to the diocesan bishop or archbishop of a metropolis; that is, the chief city of a historical Roman province, ecclesiastical province, or regional capital.Before the establishment of...
s of Saint Petersburg
Saint Petersburg
Saint Petersburg is a city and a federal subject of Russia located on the Neva River at the head of the Gulf of Finland on the Baltic Sea...
, Moscow
Moscow
Moscow is the capital, the most populous city, and the most populous federal subject of Russia. The city is a major political, economic, cultural, scientific, religious, financial, educational, and transportation centre of Russia and the continent...
and Kiev
Kiev
Kiev or Kyiv is the capital and the largest city of Ukraine, located in the north central part of the country on the Dnieper River. The population as of the 2001 census was 2,611,300. However, higher numbers have been cited in the press....
, and the Exarch
Exarch
In the Byzantine Empire, an exarch was governor with extended authority of a province at some remove from the capital Constantinople. The prevailing situation frequently involved him in military operations....
of Georgia
Georgia (country)
Georgia is a sovereign state in the Caucasus region of Eurasia. Located at the crossroads of Western Asia and Eastern Europe, it is bounded to the west by the Black Sea, to the north by Russia, to the southwest by Turkey, to the south by Armenia, and to the southeast by Azerbaijan. The capital of...
. Originally, there were ten ecclesiastical members, but the number later changed to twelve.

A series of reforms by Peter the Great inspired the creation of the Most Holy Synod. The new Imperial Age saw radical change and developments in economic, social and cultural aspects of Russian life. Peter traveled twice to Europe and made reforms that reflected his desire to westernize Russia and worked to Russify the European models to better fit his nation. Beyond forming the Synod in an effort to enfeeble the power and authority of the Russian Orthodox Church
Russian Orthodox Church
The Russian Orthodox Church or, alternatively, the Moscow Patriarchate The ROC is often said to be the largest of the Eastern Orthodox churches in the world; including all the autocephalous churches under its umbrella, its adherents number over 150 million worldwide—about half of the 300 million...
, he also challenged traditional Russian values, which were rooted in religion and a social structure defined by boyars and aristocracy, merchants, clerics, peasants and serfs. He did so by implementing enlightenment ideals, establishing the Gregorian calendar
Gregorian calendar
The Gregorian calendar, also known as the Western calendar, or Christian calendar, is the internationally accepted civil calendar. It was introduced by Pope Gregory XIII, after whom the calendar was named, by a decree signed on 24 February 1582, a papal bull known by its opening words Inter...
, reorganizing the Russian army in the European style, establishing a meritocracy (as opposed to the previous system of delineating positions by aristocratic lineage), illegalizing or taxing beards (which were common among the Old Believers
Old Believers
In the context of Russian Orthodox church history, the Old Believers separated after 1666 from the official Russian Orthodox Church as a protest against church reforms introduced by Patriarch Nikon between 1652–66...
), etc. Peter’s desire for the consolidation and standardization of authority led to the creation of the Synod. With one leader (the patriarch) the church proved too great of a threat to Peter’s rule, and he was unwilling to share power.


Road to the Synod

When the conservative Patriarch Adrian died in 1700, Peter left the position unfilled and instead Metropolitan Stephen Iavorsky, a supporter of reform, administered the church for roughly twenty years. In 1721 the church officially came under the cloak of the Russian national government with the Spiritual Order, which was ostensibly written primarily by Archbishop Theophanes Prokopovich.

After Patriarch Adrian
Patriarch Adrian
Patriarch Adrian was the last pre-revolutionary Patriarch of Moscow and All Russia.Adrian caught the eye of Patriarch Joachim, when he was still an archmandrite at Chudov Monastery. In 1686, Joachim appointed him metropolitan of Kazan and Sviyazhsk. On August 24, 1690, Adrian was chosen to replace...
died, Peter, through the inspiration and encouragement of his official A.A. Kurbatov, decided to abolish the patriarchal Razryadnyi Prikaz
Prikaz
Prikaz was an administrative or judicial office in Muscovy and Russia of 15th-18th centuries. The term is usually translated as "ministry", "office" or "department". In modern Russian "prikaz" means administrative or military order...
(rank prikaz), which was in charge of civil and military administration, and redirected all matters to the appropriate prikaz, an administrative or judicial office. This event and others demonstrated that little by little, Peter’s administration rendered each church division powerless and their duties transferred to paralleled governmental departments. Some scholars argue, though, that Peter did not intend to abolish the Patriarchy when he began altering the administrative structure of the church. Delaying choosing a new patriarch proved economically advantageous; by restricting ecclesiastic land ownership and other financial luxuries of the clergy, the state saved money. This gave Peter further incentive to abolish the Patriarchy.

In 1711, reform allotted the Senate jurisdiction over all peoples, including ecclesiastical subjects. This meant that the state now had authority over issues that had been previously reserved for church authorities. With this power came the ability, in certain situations, for the state to determine clerics for administration in religious positions.

In 1716 Peter formulated an oath for the bishops-elect of Vologda
Vologda
Vologda is a city and the administrative, cultural, and scientific center of Vologda Oblast, Russia, located on the Vologda River. The city is a major transport knot of the Northwest of Russia. Vologda is among the Russian cities possessing an especially valuable historical heritage...
and Astrakhan
Astrakhan
Astrakhan is a major city in southern European Russia and the administrative center of Astrakhan Oblast. The city lies on the left bank of the Volga River, close to where it discharges into the Caspian Sea at an altitude of below the sea level. Population:...
and Yavorskii. The oath, divided into seven parts, served as a supplement to the present oath. The first two parts regard the appropriate method for dealing with heretics and oppositionists. The third section designates that monks of their dioceses were not to travel outside diocese limits, unless for an urgent matter, and only then with written permission. The oath prohibited the building of any unnecessary churches (point 4) and the hiring on of any unessential clerics (point 5). The oath required clergy to visit their diocese at least once a year in order to dispel superstition or apostates and to congregate believers (point 6). Finally, the oath compelled bishops to swear that they would not become involved in secular affairs or legal proceedings.


Peter’s Attitude toward the Church

Peter was determined to westernize Russia during his reign, and the church was an integral part of his campaign. As mentioned earlier, the new structure of the church in many ways resembled that of European countries, such as Sweden and Germany . In a broader sense, though, Peter was attempting to modernize Russia through secularization, which was a vital step in the course of European political modernization during this time. Secularization, in this instance, meant the institutionalization and increased breadth of the state’s wealth and authority coupled with the dwindling power of the church. The church also became politically subject to the government, instead of the traditional relationship between church and state, in which rulers, such as Ivan IV, felt in some ways subject to the approval of the Orthodox Church in order to remain a legitimate sovereign.

Peter used the Synod to find and punish treasonous Russians. An addition in 1722 to the Ecclesiastic Regulation, which replaced the patriarch as the church head, required clerics to report any seditious confessions.

Before the creation of the Most Holy Synod, Peter concerned himself with improvements in the church. He was particularly interested in improving the education of the clerics, since many were illiterate and unable to administer sacraments.

At the time Peter established the Synod, he also issued the Spiritual Order, mentioned above. One key aspect of this edict was that it disregarded or denied the divinity of the church and saw it primarily as a state institution.

The Holy Synod replaced the job of the patriarch with ten, and later twelve, clerics. The Chief Procurator (Ober-Prokuror), the first of which was Colonel I. V. Boltin, oversaw the Synod in order to verify the legality of their actions and the prompt and orderly fulfillment of their responsibilities. Peter required priests to report traitorous confessions, but he did not push his ability to control to the limit, for example abstaining from secularizing church lands. Under the Synod, the church became more tolerant of various denominations, even extending this policy to the Old Believers for a period of time. Intermarriage between Orthodox and Western Christians was permitted starting in the year of the Synod’s formation.

The Synod was intended, presumably, to mirror the church-state relationship in the Lutheran countries of northern Europe. Although the emperor did not wield authority in matters of faith, the government effectively controlled organization, finances and policies of the church. With the mindset that the government should play an active role in the lives of citizens, Peter expected the church to do the same. He directed the church to form public welfare projects for the benefit of the common people. These included almshouses and Christian schools.


Duties of The Most Holy Synod

The Synod functioned under the Ecclesiastical Regulation statute with the goal of administrating and reforming the church. The statute stated that the eleven members of the college were to be of varying classes and ranks. One president, two vice-presidents, four councilors and four assessors comprised the council and each member would get one vote when determining a dispute.

Formed as a reaction to Peter’s views of Russia as compared to Western Europe, the Synod was a concentration of the most enlightened clerics. It worked to gain as much of the disputed church property as possible, and after assuming control of the patriarchal domain the Synod was accountable for the lives of six thousand people. It was to be revered absolutely in all things and possessed “patriarchal power, honour, and authority”.

The primary duties of the Synod were to supervise the direction of the Orthodox faith, instruct people on religious matters, celebrate feasts and determine questions of order and ritual. As mentioned before, the Synod also suppressed heretics, judged miracles and relics and prevented Russian citizens from practicing witchcraft. The Synod was in control of church property and was thus responsible for the creation of monasteries and churches.