Molecular self-assembly is a key concept in supramolecular chemistry
Supramolecular chemistry
Supramolecular chemistry refers to the area of chemistry beyond the molecules and focuses on the chemical systems made up of a discrete number of assembled molecular subunits or components...
since assembly of the molecules is directed through noncovalent interactions (e.g., hydrogen bond
Hydrogen bond
A hydrogen bond is the attractive interaction of a hydrogen atom with an electronegative atom, such as nitrogen, oxygen or fluorine, that comes from another molecule or chemical group. The hydrogen must be covalently bonded to another electronegative atom to create the bond...
ing, metal coordination, hydrophobic forces
Hydrophobic effect
The hydrophobic effect is the observed tendency of nonpolar substances to aggregate in aqueous solution and exclude water molecules. The name, literally meaning "water-fearing," describes the segregation and apparent repulsion between water and nonpolar substances...
, van der Waals force
Van der Waals force
In physical chemistry, the van der Waals force , named after Dutch scientist Johannes Diderik van der Waals, is the sum of the attractive or repulsive forces between molecules other than those due to covalent bonds or to the electrostatic interaction of ions with one another or with neutral...
s, π-π interactions, and/or electrostatic) as well as electromagnetic interactions. Common examples include the formation of micelle
Micelle
A micelle is an aggregate of surfactant molecules dispersed in a liquid colloid. A typical micelle in aqueous solution forms an aggregate with the hydrophilic "head" regions in contact with surrounding solvent, sequestering the hydrophobic single tail regions in the micelle centre. This phase is...
s, vesicles
Vesicle (biology)
A vesicle is a bubble of liquid within another liquid, a supramolecular assembly made up of many different molecules. More technically, a vesicle is a small membrane-enclosed sack that can store or transport substances. Vesicles can form naturally because of the properties of lipid membranes , or...
, liquid crystal
Liquid crystal
Liquid crystals are a state of matter that have properties between those of a conventional liquid and those of a solid crystal. For instance, an LC may flow like a liquid, but its molecules may be oriented in a crystal-like way. There are many different types of LC phases, which can be...
phases, and Langmuir monolayer
Monolayer
- Chemistry :A Langmuir monolayer or insoluble monolayer is a one-molecule thick layer of an insoluble organic material spread onto an aqueous subphase. Traditional compounds used to prepare Langmuir monolayers are amphiphilic materials that possess a hydrophilic headgroup and a hydrophobic tail...
s by surfactant
Surfactant
Surfactants are compounds that lower the surface tension of a liquid, the interfacial tension between two liquids, or that between a liquid and a solid...
molecules. Further examples of supramolecular assemblies demonstrate that a variety of different shapes and sizes can be obtained using molecular self-assembly.

Molecular self-assembly has allowed the construction of challenging molecular topologies
Topology
Topology is a major area of mathematics concerned with properties that are preserved under continuous deformations of objects, such as deformations that involve stretching, but no tearing or gluing...
. An example are Borromean rings, interlocking rings wherein removal of one ring unlocks each of the other rings. DNA has been used to prepare a molecular analog of Borromean rings. More recently, a similar structure has been prepared using non-biological building blocks.

Molecular self-assembly is crucial to the function of cells
Cell (biology)
The cell is the basic structural and functional unit of all known living organisms. It is the smallest unit of life that is classified as a living thing, and is often called the building block of life. The Alberts text discusses how the "cellular building blocks" move to shape developing embryos....
. It is exhibited in the self-assembly of lipid
Lipid
Lipids constitute a broad group of naturally occurring molecules that include fats, waxes, sterols, fat-soluble vitamins , monoglycerides, diglycerides, triglycerides, phospholipids, and others...
s to form the membrane
Cell membrane
The cell membrane or plasma membrane is a biological membrane that separates the interior of all cells from the outside environment. The cell membrane is selectively permeable to ions and organic molecules and controls the movement of substances in and out of cells. It basically protects the cell...
, the formation of double helical DNA through hydrogen bonding of the individual strands, and the assembly of proteins to form quaternary structure
Quaternary structure
In biochemistry, quaternary structure is the arrangement of multiple folded protein or coiling protein molecules in a multi-subunit complex.-Description and examples:...
s. Molecular self-assembly of incorrectly folded proteins into insoluble amyloid
Amyloid
Amyloids are insoluble fibrous protein aggregates sharing specific structural traits. Abnormal accumulation of amyloid in organs may lead to amyloidosis, and may play a role in various neurodegenerative diseases.-Definition:...
fibers is responsible for infectious prion
Prion
A prion is an infectious agent composed of protein in a misfolded form. This is in contrast to all other known infectious agents which must contain nucleic acids . The word prion, coined in 1982 by Stanley B. Prusiner, is a portmanteau derived from the words protein and infection...
-related neurodegenerative diseases. 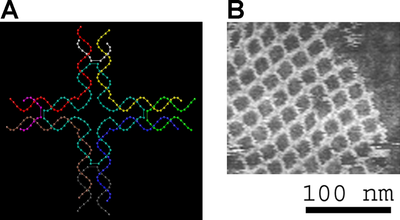 Molecular self-assembly is an important aspect of bottom-up
Top-down and bottom-up design
Top–down and bottom–up are strategies of information processing and knowledge ordering, mostly involving software, but also other humanistic and scientific theories . In practice, they can be seen as a style of thinking and teaching...
approaches to nanotechnology
Nanotechnology
Nanotechnology is the study of manipulating matter on an atomic and molecular scale. Generally, nanotechnology deals with developing materials, devices, or other structures possessing at least one dimension sized from 1 to 100 nanometres...
. Using molecular self-assembly the final (desired) structure is programmed in the shape and functional groups of the molecules. Self-assembly is referred to as a 'bottom-up' manufacturing technique in contrast to a 'top-down' technique such as lithography
Photolithography
Photolithography is a process used in microfabrication to selectively remove parts of a thin film or the bulk of a substrate. It uses light to transfer a geometric pattern from a photomask to a light-sensitive chemical "photoresist", or simply "resist," on the substrate...
where the desired final structure is carved from a larger block of matter. In the speculative vision of molecular nanotechnology
Molecular nanotechnology
Molecular nanotechnology is a technology based on the ability to build structures to complex, atomic specifications by means of mechanosynthesis. This is distinct from nanoscale materials...
, microchips of the future might be made by molecular self-assembly. An advantage to constructing nanostructure using molecular self-assembly for biological materials is that they will degrade back into individual molecules that can be broken down by the body.

DNA nanotechnology is an area of current research that uses the bottom-up, self-assembly approach for nanotechnological goals. DNA nanotechnology uses the unique molecular recognition
Molecular recognition
The term molecular recognition refers to the specific interaction between two or more molecules through noncovalent bonding such as hydrogen bonding, metal coordination, hydrophobic forces, van der Waals forces, π-π interactions, electrostatic and/or electromagnetic effects...
properties of DNA
DNA
Deoxyribonucleic acid is a nucleic acid that contains the genetic instructions used in the development and functioning of all known living organisms . The DNA segments that carry this genetic information are called genes, but other DNA sequences have structural purposes, or are involved in...
and other nucleic acids to create self-assembling branched DNA complexes with useful properties. DNA is thus used as a structural material rather than as a carrier of biological information, to make structures such as two-dimensional periodic lattices (both tile-based as well as using the "DNA origami
DNA origami
DNA origami is the nanoscale folding of DNA to create arbitrary two and three dimensional shapes at the nanoscale. The specificity of the interactions between complementary base pairs make DNA a useful construction material through design of its base sequences...
" method) and three-dimensional structures in the shapes of polyhedra
Polyhedron
In elementary geometry a polyhedron is a geometric solid in three dimensions with flat faces and straight edges...
. These DNA structures have also been used to template the assembly of other molecules such as gold nanoparticles
Colloidal gold
Colloidal gold is a suspension of sub-micrometre-sized particles of gold in a fluid — usually water. The liquid is usually either an intense red colour , or a dirty yellowish colour ....
and streptavidin
Streptavidin
Streptavidin is a 60000 dalton protein purified from the bacterium Streptomyces avidinii. Streptavidin homo-tetramers have an extraordinarily high affinity for biotin . With a dissociation constant on the order of ≈10-14 mol/L, the binding of biotin to streptavidin is one of the strongest...
proteins.

The spontaneous assembly of a single layer of molecules (i.e. monolayer thick) at interfaces is usually referred to as two-dimensional self-assembly. Early direct proofs showing that molecules can assembly into higher-order architectures at solid interfaces came with the development of scanning tunneling microscopy and shortly thereafter. Eventually two strategies became popular for the self-assembly of 2D architectures, namely self-assembly following ultra-high-vacuum deposition and annealing and self-assembly at the solid-liquid interface. The design of molecules and conditions leading to the formation of highly-crystalline architectures is considered today a form of 2D crystal engineering
Crystal engineering
Crystal engineering is the design and synthesis of molecular solid-state structures with desired properties, based on an understanding and exploitation of intermolecular interactions. The two main strategies currently in use for crystal engineering are based on hydrogen bonding and coordination...
at the nanoscopic scale
Nanoscopic scale
The nanoscopic scale usually refers to structures with a length scale applicable to nanotechnology, usually cited as 1-100 nanometers. The nanoscopic scale is a lower bound to the mesoscopic scale for most solids....
.