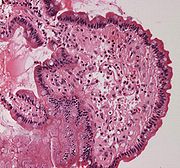 Amyloids are insoluble fibrous protein
Protein
Proteins are biochemical compounds consisting of one or more polypeptides typically folded into a globular or fibrous form, facilitating a biological function. A polypeptide is a single linear polymer chain of amino acids bonded together by peptide bonds between the carboxyl and amino groups of...
aggregates sharing specific structural traits. Abnormal accumulation of amyloid in organs may lead to amyloidosis
Amyloidosis
In medicine, amyloidosis refers to a variety of conditions whereby the body produces "bad proteins", denoted as amyloid proteins, which are abnormally deposited in organs and/or tissues and cause harm. A protein is described as being amyloid if, due to an alteration in its secondary structure, it...
, and may play a role in various neurodegenerative diseases.

The name amyloid comes from the early mistaken identification of the substance as starch
Starch
Starch or amylum is a carbohydrate consisting of a large number of glucose units joined together by glycosidic bonds. This polysaccharide is produced by all green plants as an energy store...
(amylum in Latin
Latin
Latin is an Italic language originally spoken in Latium and Ancient Rome. It, along with most European languages, is a descendant of the ancient Proto-Indo-European language. Although it is considered a dead language, a number of scholars and members of the Christian clergy speak it fluently, and...
), based on crude iodine-staining techniques. For a period, the scientific community debated whether or not amyloid deposits were fatty
Lipid
Lipids constitute a broad group of naturally occurring molecules that include fats, waxes, sterols, fat-soluble vitamins , monoglycerides, diglycerides, triglycerides, phospholipids, and others...
deposits or carbohydrate
Carbohydrate
A carbohydrate is an organic compound with the empirical formula ; that is, consists only of carbon, hydrogen, and oxygen, with a hydrogen:oxygen atom ratio of 2:1 . However, there are exceptions to this. One common example would be deoxyribose, a component of DNA, which has the empirical...
deposits until it was finally found that they were, in fact, deposits of proteinaceous material.

The remainder of this article will use the biophysical context.

The International Society of Amyloidosis classifies amyloid fibrils based upon associated proteins.

Amyloid is characterized by a cross-beta sheet
Beta sheet
The β sheet is the second form of regular secondary structure in proteins, only somewhat less common than the alpha helix. Beta sheets consist of beta strands connected laterally by at least two or three backbone hydrogen bonds, forming a generally twisted, pleated sheet...
quaternary structure
Quaternary structure
In biochemistry, quaternary structure is the arrangement of multiple folded protein or coiling protein molecules in a multi-subunit complex.-Description and examples:...
. While amyloid is usually identified using fluorescent dyes, stain polarimetry, circular dichroism
Circular dichroism
Circular dichroism refers to the differential absorption of left and right circularly polarized light. This phenomenon was discovered by Jean-Baptiste Biot, Augustin Fresnel, and Aimé Cotton in the first half of the 19th century. It is exhibited in the absorption bands of optically active chiral...
, or FTIR
Fourier transform infrared spectroscopy
Fourier transform infrared spectroscopy is a technique which is used to obtain an infrared spectrum of absorption, emission, photoconductivity or Raman scattering of a solid, liquid or gas. An FTIR spectrometer simultaneously collects spectral data in a wide spectral range...
(all indirect measurements), the "gold-standard" test to see if a structure contains cross-beta fibres is by placing a sample in an X-ray
X-ray
X-radiation is a form of electromagnetic radiation. X-rays have a wavelength in the range of 0.01 to 10 nanometers, corresponding to frequencies in the range 30 petahertz to 30 exahertz and energies in the range 120 eV to 120 keV. They are shorter in wavelength than UV rays and longer than gamma...
diffraction beam. The term "cross-beta" was based on the observation of two sets of diffraction lines, one longitudinal and one transverse, that form a characteristic "cross" pattern. There are two characteristic scattering diffraction signals produced at 4.7 and 10 Ångstrom
Ångström
The angstrom or ångström, is a unit of length equal to 1/10,000,000,000 of a meter . Its symbol is the Swedish letter Å....
s (0.47 nm and 1.0 nm), corresponding to the interstrand and stacking distances in beta sheets. The "stacks" of beta sheet are short and traverse the breadth of the amyloid fibril; the length of the amyloid fibril is built by aligned strands.

Recent x-ray diffraction studies of microcrystals revealed atomistic details of core region of amyloid. In the crystallographic structure
short stretches from amyloid prone region of amyloidogenic proteins run perpendicular to the filament axis, confirming the "cross-beta" model. In addition
two layers of beta-sheet interdigite to create compact dehydrated interface termed as steric-zipper interface. There are eight classes of steric-zipper
interfaces, depending on types of beta-sheet (parallel and anti-parallel) and symmetry between two adjacent beta-sheets.

Amyloid polymer
Polymer
A polymer is a large molecule composed of repeating structural units. These subunits are typically connected by covalent chemical bonds...
ization (aggregation or non-covalent polymerization) is generally sequence-sensitive, that is, causing mutations in the sequence can prevent self-assembly, especially if the mutation is a beta-sheet breaker, such as proline or non-coded alpha-aminoisobutyric acid. For example, humans produce amylin
Amylin
Amylin, or Islet Amyloid Polypeptide , is a 37-residue peptide hormone secreted by pancreatic β-cells at the same time as insulin .-Clinical significance:...
, an amyloidogenic peptide associated with type II diabetes, but in rats and mice prolines are substituted in critical locations and amyloidogenesis does not occur.

There are two broad classes of amyloid-forming polypeptide sequences. Glutamine-rich polypeptides are important in the amyloidogenesis of Yeast and mammalian prions, as well as Trinucleotide repeat disorders
Trinucleotide repeat disorders
Trinucleotide repeat disorders are a set of genetic disorders caused by trinucleotide repeat expansion, a kind of mutation where trinucleotide repeats in certain genes exceeding the normal, stable, threshold, which differs per gene...
including Huntington's disease. When peptides are in a beta-sheet conformation, particularly when the residues are parallel and in-register (causing alignment), glutamines can brace the structure by forming intrastrand hydrogen bonding between its amide carbonyls and nitrogens. In general, for this class of diseases, toxicity correlates with glutamine content. This has been observed in studies of onset age for Huntington's disease
Huntington's disease
Huntington's disease, chorea, or disorder , is a neurodegenerative genetic disorder that affects muscle coordination and leads to cognitive decline and dementia. It typically becomes noticeable in middle age. HD is the most common genetic cause of abnormal involuntary writhing movements called chorea...
(the longer the polyglutamine sequence
Polyglutamine tract
A polyglutamine tract or polyQ tract is a portion of a protein consisting of a sequence of several glutamine units. A tract typically consists of about 10 to a few hundred such units....
, the sooner the symptoms appear), and has been confirmed in a C. elegans
Caenorhabditis elegans
Caenorhabditis elegans is a free-living, transparent nematode , about 1 mm in length, which lives in temperate soil environments. Research into the molecular and developmental biology of C. elegans was begun in 1974 by Sydney Brenner and it has since been used extensively as a model...
model system with engineered polyglutamine peptides.

Other polypeptides and proteins such as amylin
Amylin
Amylin, or Islet Amyloid Polypeptide , is a 37-residue peptide hormone secreted by pancreatic β-cells at the same time as insulin .-Clinical significance:...
and the Alzheimer's beta protein do not have a simple consensus sequence and are thought to operate by hydrophobic association. Among the hydrophobic residues, aromatic amino-acids are found to have the highest amyloidogenic propensity.

For these peptides, cross-polymerization (fibrils of one polypeptide sequence causing other fibrils of another sequence to form) is observed in vitro and possibly in vivo. This phenomenon is important since it would explain interspecies prion
Prion
A prion is an infectious agent composed of protein in a misfolded form. This is in contrast to all other known infectious agents which must contain nucleic acids . The word prion, coined in 1982 by Stanley B. Prusiner, is a portmanteau derived from the words protein and infection...
propagation and differential rates of prion propagation, as well as a statistical link between Alzheimer's and type 2 diabetes. In general, the more similar the peptide sequence the more efficient cross-polymerization is, though entirely dissimilar sequences can cross-polymerize and highly similar sequences can even be "blockers" which prevent polymerization. Polypeptides will not cross-polymerize their mirror-image counterparts, indicating that the phenomenon involves specific binding and recognition events.

The reasons for amyloid association with disease is unclear. In some cases, the deposits physically disrupt tissue architecture, suggesting disruption of function by some bulk process. An emerging consensus implicates prefibrillar intermediates, rather than mature amyloid fibers, in causing cell death.
Studies have shown that amyloid deposition is associated with mitochondrial dysfunction and a resulting generation of reactive oxygen species (ROS), which can initiate a signaling pathway leading to apoptosis
Apoptosis
Apoptosis is the process of programmed cell death that may occur in multicellular organisms. Biochemical events lead to characteristic cell changes and death. These changes include blebbing, cell shrinkage, nuclear fragmentation, chromatin condensation, and chromosomal DNA fragmentation...
.

These proteins are typically characterized by their ability to cause aggregation of healthy protein.

Clinically, amyloid diseases are typically identified by a change in the fluorescence
Fluorescence
Fluorescence is the emission of light by a substance that has absorbed light or other electromagnetic radiation of a different wavelength. It is a form of luminescence. In most cases, emitted light has a longer wavelength, and therefore lower energy, than the absorbed radiation...
intensity of planar aromatic dye
Dye
A dye is a colored substance that has an affinity to the substrate to which it is being applied. The dye is generally applied in an aqueous solution, and requires a mordant to improve the fastness of the dye on the fiber....
s such as thioflavin T or congo red
Congo red
Congo red is the sodium salt of 3,3'-bis. It is a secondary diazo dye...
. Congo red positivity remains the gold standard for diagnosis of amyloidosis
Amyloidosis
In medicine, amyloidosis refers to a variety of conditions whereby the body produces "bad proteins", denoted as amyloid proteins, which are abnormally deposited in organs and/or tissues and cause harm. A protein is described as being amyloid if, due to an alteration in its secondary structure, it...
. This is generally attributed to the environmental change, as these dyes intercalate
Intercalation (chemistry)
In chemistry, intercalation is the reversible inclusion of a molecule between two other molecules . Examples include DNA intercalation and graphite intercalation compounds.- DNA intercalation :...
between beta-strands. Congophilic amyloid plaques generally cause apple-green birefringence
Birefringence
Birefringence, or double refraction, is the decomposition of a ray of light into two rays when it passes through certain anisotropic materials, such as crystals of calcite or boron nitride. The effect was first described by the Danish scientist Rasmus Bartholin in 1669, who saw it in calcite...
when viewed through crossed polarimetric filters. To avoid nonspecific staining, other histology
Histology
Histology is the study of the microscopic anatomy of cells and tissues of plants and animals. It is performed by examining cells and tissues commonly by sectioning and staining; followed by examination under a light microscope or electron microscope...
stains, such as the hematoxylin and eosin
H&E stain
H&E stain, HE stain or hematoxylin and eosin stain is a popular staining method in histology. It is the most widely used stain in medical diagnosis; for example when a pathologist looks at a biopsy of a suspected cancer, the histological section is likely to be stained with H&E and termed H&E...
stain, are used to quench the dyes' activity in other places such as the nucleus where the dye might bind. Modern antibody technology and immunohistochemistry
Immunohistochemistry
Immunohistochemistry or IHC refers to the process of detecting antigens in cells of a tissue section by exploiting the principle of antibodies binding specifically to antigens in biological tissues. IHC takes its name from the roots "immuno," in reference to antibodies used in the procedure, and...
has made specific staining easier, but often this can cause trouble because epitopes can be concealed in the amyloid fold; an amyloid protein structure is generally a different conformation from that which the antibody recognizes.